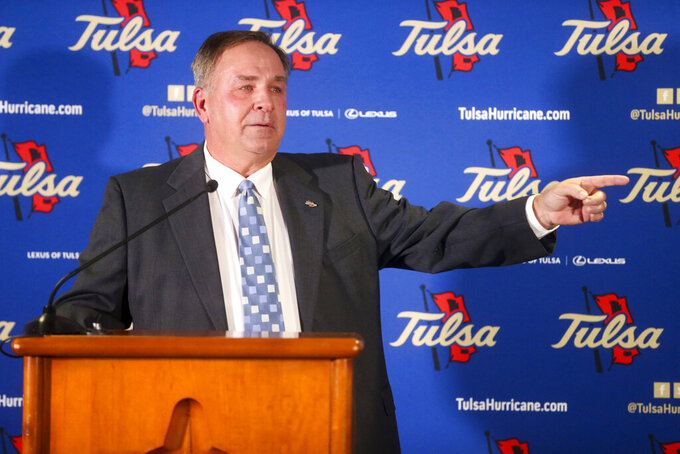 TULSA, Okla. (AP) — Kevin Wilson will seek to bring Tulsa some of the prolific passing and scoring he's overseen during six seasons as the offensive coordinator at Ohio State.

Wilson was hired as Tulsa's coach on Tuesday and introduced at an afternoon news conference.

“With career ties to the state of Oklahoma, I’ve always had great appreciation for the university, the football program, its success through the years and the great city and people that live in Tulsa,” Wilson said. “I’m looking forward to getting to know our current players, the staff and putting together a new staff in the weeks to come.”

He then joined Urban Meyer's staff at Ohio State and stayed on under Meyer's successor, Ryan Day. During that time, Ohio State has become a quarterback factory, producing back-to-back first-round draft picks at the position: the late Dwayne Haskins and Justin Fields. Current Buckeyes QB C.J. Stroud is also projected as a first-round pick.

At Tulsa, Wilson replaces Philip Montgomery, who was fired after going 43-53 in eight seasons with the American Athletic Conference program, including 5-7 in 2022.

“Coach Wilson is a proven winner and great fit for TU as he has a history of building programs where student-athletes succeed both in the classroom and on the gridiron,” university President Brad Carson said.

Wilson has coached in four national championship games, three at Oklahoma and one at Ohio State. The Buckeyes went 67-8 during his six years as their offensive coordinator and tight ends coach.

Ohio State (11-1) is preparing to face No. 1 Georgia in a College Football Playoff semifinal on Dec. 31.