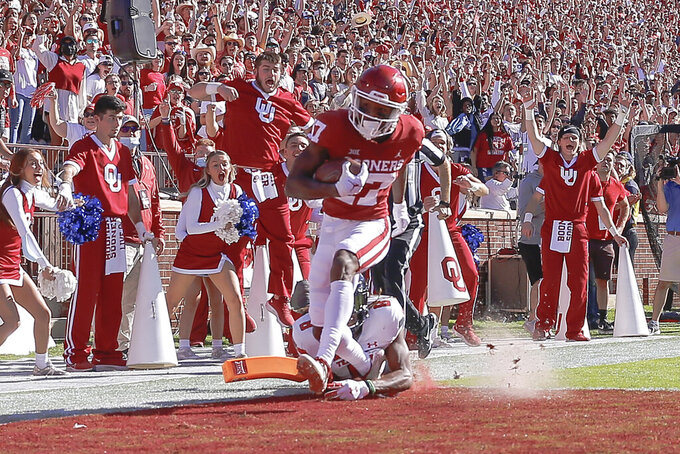 Oklahoma wide receiver Marvin Mims (17) runs in for a touchdown ahead of Texas Tech defensive back Malik Dunlap (8) during the first half an NCAA college football game, Saturday, Oct. 30, 2021, in Norman, Okla. (AP Photo/Alonzo Adams)

NORMAN, Okla. (AP) — Oklahoma is starting to put it all together.

Caleb Williams threw for 402 yards and six touchdowns and No. 4 Oklahoma rolled past Texas Tech 52-21 on Saturday.

The Sooners won six of their first eight games by 12 or fewer points, and the offense, defense and special teams had spent much of the season bailing each other out.

This time, Oklahoma produced the kind of dominant victory fans expected from the start of the season.

“Fantastic team win,” Oklahoma coach Lincoln Riley said. “Just a complete performance all the way around. Offense, defense, special teams — huge contributions from everybody. Really loved the week of preparation. The guys did a really good job carrying it over from from the practice field to the game field.”

Williams — a true freshman — tied Kyler Murray and Landry Jones for the second-most touchdown passes in a game in school history. Baker Mayfield threw seven against Texas Tech in 2016.

He bounced back from a rough first series.

“I thought he had a really clear mind the entire way and obviously settled in there quickly,” Riley said. "Really nice job of things inside the pocket, and obviously, made some key plays out of it.”

Riley said the plan wasn't to throw such a large percentage of the time. Williams threw 30 passes. The Sooners ran the ball just 20 times — many of which came after Williams left the game.

“Just kind of how it evolved,” he said. “We’ve shown we can be a team that can run it pretty well. Today was one of our better games throwing the football.”

Marvin Mims caught four passes for 135 yards and two touchdowns, and Mario Williams had five receptions for 100 yards and a score to help the Sooners (9-0, 6-0 Big 12) extend their nation-leading winning streak to 17 games.

Donovan Smith passed for 192 yards for the Red Raiders (5-4, 2-4) in Sonny Cumbie’s first game as interim coach since Matt Wells was fired. Erik Ezukanma caught eight passes for 123 yards and a touchdown.

Mims caught a 67-yard touchdown pass from Williams late in the first quarter — the longest catch of his career — to put the Sooners ahead 14-7.

Williams passed for 268 yards and tossed four touchdowns to four receivers in the first half to help Oklahoma take a 28-7 lead. He then threw touchdown passes of 43 yards to Mims in the third quarter and nine yards to Austin Stogner in the fourth.

Cumbie said the transition was no excuse for the poor performance, but he believes its an ideal time for Tech's upcoming bye.

Texas Tech: The Red Raiders looked flat and didn't play the control-the-clock game as much as many opponents that have had success against the Sooners.

Oklahoma: The Sooners learned they could control a game with Williams’ arm. The Sooners rushed for just 72 yards, yet the offense moved the ball just fine. Williams focused on staying in the pocket much of the game and often was rewarded for his patience.

Williams replaced Rattler during the Texas game and has started the past three contests. Rattler entered Saturday’s game in the fourth quarter and completed 5 of 5 passes for 67 yards, including a 42-yard touchdown pass to Brian Darby. The home crowd, which booed Rattler earlier in the season against West Virginia, gave him a standing ovation when he entered the game.

Rattler's teammates celebrated with him after the touchdown. Riley hoped that visual would end the talk that Rattler is selfish and distant from his teammates.

Oklahoma kicker Gabe Brkic hit a 53-yard field goal into the wind in the third quarter. He has made five of six field goals of 50 or more yards this season. He has made two from 56 yards - tied for the longest field goals in the nation heading into the week.

Oklahoma defensive lineman Isaiah Thomas forced a fumble and recovered it on the same play when he swiped the ball away from Smith and had two batted balls and 1.5 tackles for loss.