Arizona State at No. 20 UCLA tops the Pac-12 this week 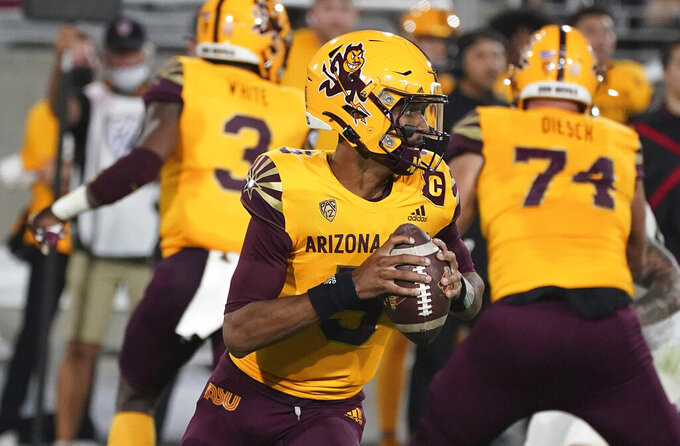 GAME OF THE WEEK: Arizona State at No. 20 UCLA. Two of the favorites to win the Pac-12 South can get an early leg up on winning the division. The 3-1 teams meet after bouncing back from their first losses with conference-opening wins. The Sun Devils shook off a loss to BYU by rolling over Colorado last week, and the Bruins opened Pac-12 play with an 11-point win over Stanford after losing to Fresno State. This will be a battle of strengths. UCLA is sixth nationally against the run, allowing 64 yards per game, and Arizona State is 25th rushing with 211.5 yards per game. Should be one of the Pac-12's best early season games.

MATCHUP OF THE WEEK: No. 3 Oregon (4-0, 1-0 Pac-12) at Stanford (2-2, 1-1). The winner of this game has gone on to win the Pac-12 North seven of the past 10 seasons. The Ducks boosted their College Football Playoff hopes by knocking off then-No. 3 Ohio State and face their first stiff challenge of the Pac-12 season. The Cardinal have won four of their last six games against top-5 opponents, including twice over Oregon. The key could be turnovers. The Ducks are picking them up in bunches, tying Kent State and Notre Dame for the FBS lead with nine interceptions, including five last week in a rout of Arizona.

INSIDE THE NUMBERS: Southern California, which plays at Colorado, has won seven straight conference road games, the nation's second-longest streak behind Ohio State at 10. ... ... Oregon RB CJ Verdell needs 134 yards rushing to reach 3,000 for his career. ... Washington State is tied for the national lead with six recovered fumbles and is sixth with 10 forced turnovers.

PLAYER TO WATCH: Oregon S Bennett Williams. The junior was named the Walter Camp FBS national defensive player of the week and took the same honor in the Pac-12 after a dominating game against Arizona. Williams had two of the Ducks' interceptions, including one returned for a 68-yard touchdowns, and eight tackles.

UPSET WATCH: Washington (2-2, 1-0) at Oregon State (3-1, 1-1). The Beavers are 2 1/2-point favorites, according to FanDuel Sportsbook, and coming off their first win at USC since 1960, but have struggled against the Huskies. Washington has won nine straight in the series and has been playing better after an ugly start to the season. Washington opened Pac-12 play with a 31-24 win over California last week and has scored 83 combined points the past two weeks.