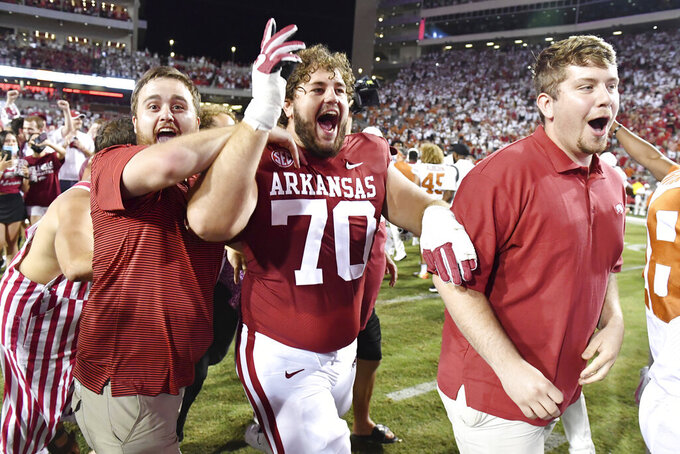 FAYETTEVILLE, Ark. (AP) — Texas hasn’t considered Arkansas to be a rival for a long time. Judging by the goal posts coming down Saturday night and with the Longhorns set to join the Southeastern Conference soon, that won’t last.

Arkansas ran for 333 yards, held Texas to 256 yards of total offense and the Razorbacks beat their former Southwest Conference nemesis 40-21 on Saturday night. The ninth-largest crowd in Arkansas history, 74,531 strong, was jubliant all night and many of them stormed the field afterward, celebrating their team’s first win over Texas in Fayetteville since 1981.

Arkansas coach Sam Pittman was the Razorbacks’ offensive line coach the last time they played Texas in the 2014 Texas Bowl. He credited his former unit for the big night. Arkansas was 120th in FBS last year in sacks allowed.

“Isn’t that something? (Offensive line coach Cody Kennedy) comes in in June and we rush for 333 yards,” Pittman said. “He’s got some really hard-working kids. They took a lot of heat in the past and will, I’m sure, some in the future. But the way they played, to rush for 333 against a good Texas squad is outstanding.”

The Razorbacks led 16-0 at halftime as Texas was dominated from the beginning. The Longhorns (1-1) punted on six of their first seven drives. Their seventh resulted in a missed field goal.

“This was not a performance I was anticipating,” first-year coach Steve Sarkisian said. “But we’ll find out about ourselves and what we’re made of, because I really believe this one games not going to define us. But we’ve got work to do, that’s for sure.”

Arkansas (2-0) had no such trouble. The Razorbacks punted twice the whole game, on its first two drives. Every other series resulted in a score except one that resulted in an interception that led to Texas’ first touchdown.

The five minutes that followed that score were the only quiet ones of the night as Texas trimmed Arkansas’ lead to 16-7. When Razorbacks quarterback KJ Jefferson connected with Tyson Morris for 46 yards on the ensuing drive, the volume returned. Arkansas would cap that series with a 1-yard touchdown from Trelon Smith.

“That was a big answer right there and I was hoping he would do exactly what he did,” Pittman said. “We could have went in the tank that series, too. We didn’t. We went right back down and scored a touchdown.”

After an Arkansas field goal, the Longhorns’ next offensive play resulted in a strip-sack of quarterback Hudson Card the Razorbacks recovered at the Texas 26 and Raheim Sanders went that distance on the next play, practically ending the visitors’ chances.

Card was pulled on the final drive of the third quarter with Texas trailing 33-7. Casey Thompson led two Longhorns scoring drives in the fourth quarter, both capped by his rushing touchdowns.

The two Texas quarterbacks combined to go 13 of 23 for 118 yards with no touchdowns. Star running back Bijan Robinson, like most of the Longhorns, was bottled up all night and ended with 69 yards and a touchdown on 19 carries.

The Longhorns’ 256 yards of total offense are their lowest since 2015. Asked about his quarterback situation, Sarkisian said "we’ll have to take a look at it.”

“Could we have blocked better? No question. Could Hudson have maybe played better? Sure he could have. Could we have ran better routes? Yes,” Sarkisian said. “So everybody takes a part in this thing, coaches included.”

Arkansas linebacker Hayden Henry started in place of Bumper Pool, who had to serve a first-half suspension following a targeting ejection in last week’s win over Rice. Henry led with a career-high 15 tackles, including 2 1/2 for-loss. Henry’s father played center for the Razorbacks in the late 1980s when the two teams were playing head-to-head every season. He had said this week that when he was a child, he was taught Texas was the enemy.

Arkansas’ touchdowns all came from different players. Dominique Johnson scored the game’s first from five yards early in the second quarter. Trelon Smith scored his from one yard. Sanders’ came in the third and fellow freshman running back AJ Green went 30 yards with 8:27 left to provide the Razorbacks’ final points of the night.

None of the Arkansas offensive players eclipsed the 100-yard, but the four scorers and Jefferson all had at least 44 apiece. Smith, the starter, led with 75 on 12 carries.

The two teams could meet yearly again soon. Texas accepted an invitation to join the SEC over the summer. It’s likely to begin playing in the conference in 2025.

Henry, though, considered this the Longhorns’ initiation.

Arkansas and Texas were rivals in the now-defunct Southwest Conference, but have only played six times since the Razorbacks left the conference after the 1991 season. Texas leads the all-time series 56-23, but Arkansas has won four of the six meetings since leaving the SWC.

Arkansas could be nearing a Top 25 ranking after beating Rice and Texas to open the season. Beating a ranked team will likely build the team’s confidence when SEC play begins in two weeks.

Another early-season loss continues Texas’ trend in recent seasons. The Longhorns have lost at least one of their first three games every year since 2014.

Texas will host Rice next Saturday.

This story has been updated to correct the year of Arkansas' last win at home over Texas.