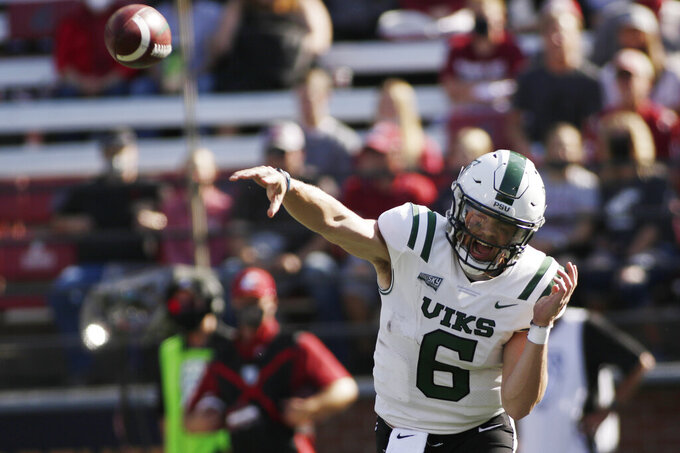 Davis Alexander threw for 318 yards and two touchdowns for Portland State (0-2), an FCS program which upset Washington State in Pullman the last time the teams played in 2015. His favorite target was Beau Kelly, who caught 10 passes for 152 yards.

Portland State, a member of the Big Sky Conference, fell to 4-42 all-time against FBS teams.

Washington State blew the game open in the second quarter when it switched to a hurry-up offense and scored on four straight possessions to take a 30-10 lead at halftime.

“This was in our plans,” Rolovich said.

Also effective was the WSU running game, which gained 159 yards on an average of 4.8 yards per carry.

Rolovich said he was dissatisfied with how often his quarterbacks checked out of running plays during the loss to Utah State.

“We threw it too much when it should have been handed off,” Rolovich said of the Utah State game. As a result, “we took out some pre-snap decisions for the quarterback.”

De Laura, a sophomore who started all four games last season, completed 21 of 29 passes for 303 yards and was intercepted once.

Portland State coach Bruce Barnum said Washington State was a fast team and only was penalized once for 10 yards.

“They got snake bit last week and they responded. Good for them,” Barnum said.

“To beat a team like Washington State, we need to play damn near perfect, and we didn’t do that today," Barnum said.

“We just couldn’t run, and that puts us in a tough spot, especially because they’ve got a back end like we won’t see in our conference," Barnum said. "I could have run my quarterback, but I wasn’t gonna let my quarterback get banged up, because if we can win from here on out we can still make a run at the Big Sky playoffs.”

Washington State drove to the Portland State 6 on its next possession, but de Laura was intercepted in the end zone by Anthony Adams to end the drive.

Alexander led Portland State on a 79-yard drive early in the second quarter, capped by his 1-yard scoring run, to tie the score at 7-7.

After a Portland State punt, de Laura directed a 75-yard drive that ended with McIntosh's 16-yard run up the middle that gave Washington State a 21-7 lead.

Cody Williams replied with a 46-yard field goal for Portland State, but de Laura then marched the Cougars down the field in six quick plays. His 19-yard touchdown pass to Harris gave WSU a 27-10 lead.

Dean Janikowski kicked a 23-yard field goal as time expired to give WSU a 30-10 halftime lead.

Alexander fired a 39-yard touchdown pass to Kelly in the fourth quarter.

Max Borghi has now scored 31 total touchdowns in his WSU career, fourth most in school history. His 22 rushing touchdowns are tied for fourth-most.

Washington State's offense showed marked improvement after a lackluster performance in the loss to Utah State last weekend. De Laura, who started this game after Jarrett Guarantano was injured last week, looked sharp. Portland State's offense did not repeat the success it had in last weekend's 49-35 loss at Hawaii.