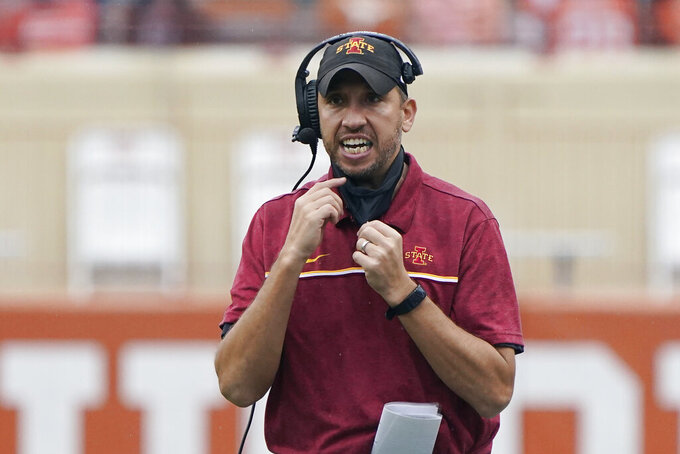 Jim Walden once said if a football coach stays at Iowa State, two things will happen: he will lose and he will get fired.

Walden predicted in the early 1990s that the Cyclones might be headed toward dropping to Division I-AA, now known as the Football Championship Subdivision. Weeks before he decided to resign in 1994, he told a reporter that administrators would have to fire him, saying, “They’re going to have to pay me for this abuse."

Imagine Walden's surprise to see what is going on in Ames, Iowa, under fifth-year coach Matt Campbell. The 12th-ranked Cyclones (7-2, 7-1 Big 12) have secured at least a share of the Big 12 regular-season title with a school record for league wins. They also have an inside track to the conference championship game.

“I don’t know if I thought I would see it,” Walden said in an interview with The Associated Press. “There's not been a time in my life since I got involved with Iowa State that I didn’t want to see it.”

Walden, 82, is retired in Idaho and watches every Iowa State game on television. He said he has been back to Ames for two games since Campbell took over in 2016 but has never had a chance to talk to him.

Walden said he plans to text or call Campbell to thank him for doing what previous coaches could not at a school that hasn't won even a share of a conference title in football since 1912.

“Watching him do it gives me so much pleasure," he said.

Walden coached Iowa State when it was pretty much the mainstay in the basement of the old Big Eight. He had a knack for pulling the upset at his previous stop, Washington State, and was ever the optimist when Iowa State hired him in 1986. Eight years later, he was bitter and beaten down. Dan McCarney, Gene Chizik and Paul Rhoads followed him and couldn't get over the hump, either.

Walden blamed himself for not understanding the situation as well as he should have when he took the job. Jim Criner was fired for violating rules, and NCAA-imposed scholarship reductions and attrition left Walden with just 57 scholarship players his first year. It took four years to rebuild the numbers.

Iowa State had stringent academic standards and a policy forbidding Walden from recruiting players who didn't meet them; players known as Prop 48s who could sit out a year while trying to become eligible.

The school's football funding was among the lowest and the facilities among the worst in the country and a hindrance to recruiting at a place where geography and low population are handicaps.

The competition was fierce, too. Barry Switzer at Oklahoma and Tom Osborne at Nebraska had their teams in the top 10, Bill McCartney had Colorado on the rise, Bill Snyder was about to work wonders at Kansas State and Hayden Fry at Iowa was winning battles for in-state recruits and beating the Cyclones on the field.

“Those are Hall of Fame guys now,” Walden said. “It wasn’t like we were playing a pack of dogs.”

Walden said Campbell is sustaining success in a conference every bit as tough as the Big Eight was in the early 1990s.

“The coaches at Oklahoma are just as good," Walden said, “and programs like Oklahoma and Texas, it doesn’t matter who goes there. You really have to be a bad coach to screw that up. Those schools don’t wander away from winning very often. Now you add a TCU, a Baylor at certain times. You’re damn right there’s good football teams in that league. What he's doing is marvelous.”

Walden said Campbell proved his coaching chops at Toledo, and he showed up with the right plan for Iowa State. Campbell benefits from new facilities, Walden said, and his staff have been aggressive in mining prospects nationally. He also has engendered buy-in for a culture emphasizing player development and patience.

“I just catch myself pulling for Iowa State,” he said. "I pull for the fans. Just think about if you’re a big-time booster for 25 years and 35 years in some cases, you’ve been supporting this program heart and soul, but you never ever had a team like this team is. When I see what they’re doing, I get involved emotionally pulling for them so hard because I want those fans to enjoy it.”

How long the ride lasts is anybody's guess.

“This late in the season, even if he ends up not winning the championship game, there was a time he was sitting at the top of the mountain,” Walden said. “Let's enjoy it while it's there, be proud of the guy who's doing it and hope like hell he doesn't leave.”