No. 19 Kansas looks for rare victory against Oklahoma 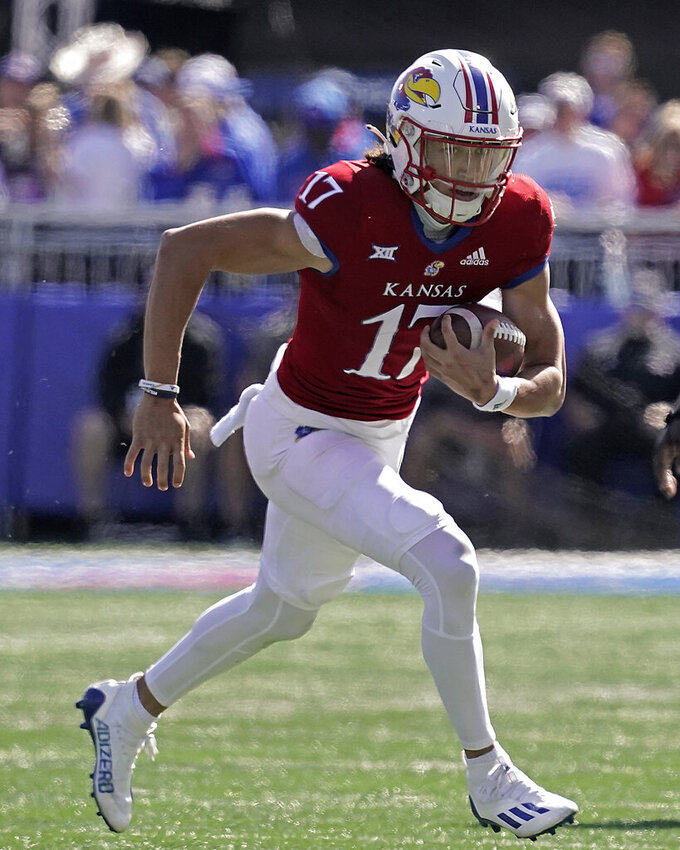 Line: Oklahoma by 9, according to FanDuel Sportsbook.

Kansas has a chance to post one of its best seasons ever and make a run at a spot in the Big 12 title game. But the Jayhawks are coming off a loss to TCU, and a loss to Oklahoma puts those high hopes in jeopardy. Oklahoma is likely already out of the running for the conference title, but a victory over Kansas would be a first step towards salvaging something from a disappointing season for first-year coach Brent Venables.

Oklahoma QB Dillon Gabriel vs. Kansas DE Lonnie Phelps. Gabriel missed last week's game against Texas while in concussion protocol. He's expected to play Saturday as long as he gets through testing during the week. His condition makes it critical that the Sooners keep Phelps, who ranks second among Big 12 players with six sacks, away from him.

Kansas: RB Devin Neal leads the Jayhawks with 421 yards rushing and has four touchdowns on the ground. His support will be critical to Jason Bean, who likely will start at quarterback because Jalon Daniels suffered a right shoulder injury last week against TCU.

Oklahoma: WR Marvin Mims. He's one of the best players in the Big 12 if the Sooners can get the ball to him, and that seems likely if Gabriel plays. He has 23 catches for 436 yards but had just one catch for minus-2 yards against Texas.

Oklahoma has won 17 straight against Kansas. The Jayhawks last beat the Sooners in 1997. ... This will be the first time since 1992 that the teams have met when Kansas is ranked and Oklahoma is not. ... Kansas is ranked heading into the matchup for the first time since 2009. ... This will be just the sixth game since the start of the 2010 season that Oklahoma is unranked. ... Oklahoma has scored at least 34 points in its past 13 games against Kansas.