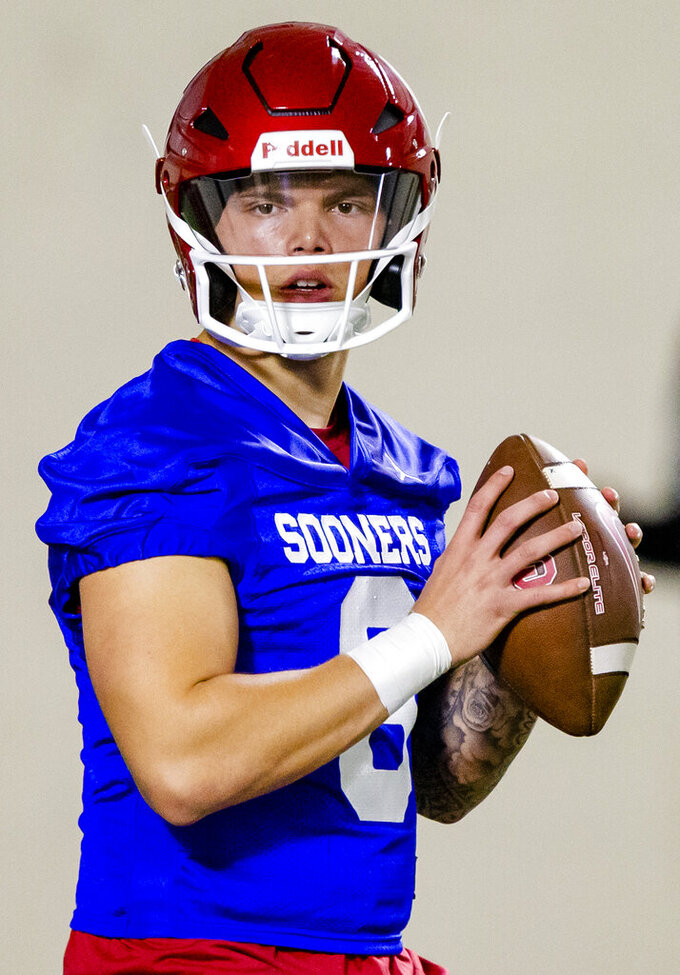 FILE - Quarterback Dillon Gabriel (8) throws a pass during the University of Oklahoma's first spring football practice at the Everest Training Center in Norman, Okla., on Tuesday, March 22, 2022. Oklahoma's new quarterback has had plenty of success at the college level. He passed for more than 8,000 yards and 70 touchdowns at Central Florida while leading some of the nation’s most productive offenses. Now, he'll be the starting quarterback for a Sooner program that has produced Heisman winners Jason White, Sam Bradford, Baker Mayfield and Kyler Murray at the position in the past 20 years. (Chris Landsberger/The Oklahoman via AP, File)

He has had plenty of success as a college quarterback -- he passed for more than 8,000 yards and 70 touchdowns at Central Florida while leading some of the nation's most productive offenses.

After transferring to Oklahoma, he will now be the starting quarterback for a program that has produced Heisman Trophy winners Jason White, Sam Bradford, Baker Mayfield and Kyler Murray at the position in the past 20 years.

Gabriel is aware of what Oklahoma quarterbacks have meant to the sport, and he'll get a reminder on Saturday when Mayfield's Heisman statue is revealed at Heisman Park across from Memorial Stadium.

“I don’t take this position lightly,” the 6-foot left-hander said. “I know it’s a privilege to be in this position.”

Gabriel values each step on this journey, and he said an important one will be Saturday's spring game. He’ll play some on both the Red and White teams.

“I think a lot of things have been going a million miles per hour since I got here, right?” he said. “Just trying to be focused. Trying to keep the main thing the main thing. But kind of being on the back end of spring ball, I’m super grateful to be here. I love this place.”

The pressure will be on. He will be expected to keep the Sooner offense rolling now that coach Lincoln Riley and quarterback Caleb Williams have left for USC and quarterback Spencer Rattler has transferred to South Carolina. He is ignoring what outsiders say and focusing on what he has relied on to get this far — hard work.

“I think as of right now, I really haven’t done anything on the field,” Gabriel said. “So, you know, walking around, I’m just the same old dude.”

Gabriel's mentality has made a positive impression on new coach Brent Venables.

“He has those special qualities,” Venables said. “He’s very humble. He’s not loud and braggadocious and making any kind of proclamations. He doesn’t need to. He does it (gains respect) with his work, his competitiveness, his toughness. He obviously has street credibility with the players because of what he has done at a high level.”

“I think it goes way back from a trust standpoint,” Gabriel said. “I really trust him, love playing in his offense -- the way he’s able to strategically use people and put them in good positions to go play and win a lot of ballgames while scoring a lot of points.”

Because Lebby’s offense hasn’t changed much, Gabriel has been able to steer his teammates.

“I would say Dillon knows the playbook better than everybody,” offensive lineman Anton Harrison said. “This is his offense. He helps us a lot. We need him and talk to him a lot with the playbook and the tempo. Sometimes, he can call it out for us because he knows it so well. It’s been great having him back there at quarterback because he can help us and teach us.”

Still, there have been subtle changes that Gabriel has had to pick up this spring.

“I think everyone continues to evolve – verbage, terminology -- whatever you want to call it,” Gabriel said. “There will forever be new plays within everyone’s offense year to year. There have been challenges to myself, but we’ll continue to get back into it. It’s definitely helped having prior knowledge, for sure.”

Gabriel has prioritized building a rapport with his receivers. A priority has been connecting with Marvin Mims, a speedster who caught five touchdown passes last season and averaged 22 yards per catch.

“He’s one of the best I’ve been around,” Gabriel said. "Speed. All-around receiver. Very physical, and usually from speed guys, you don’t really see that. So that’s something very new. Just all around, man, he goes up and gets it. He’s extremely talented.”