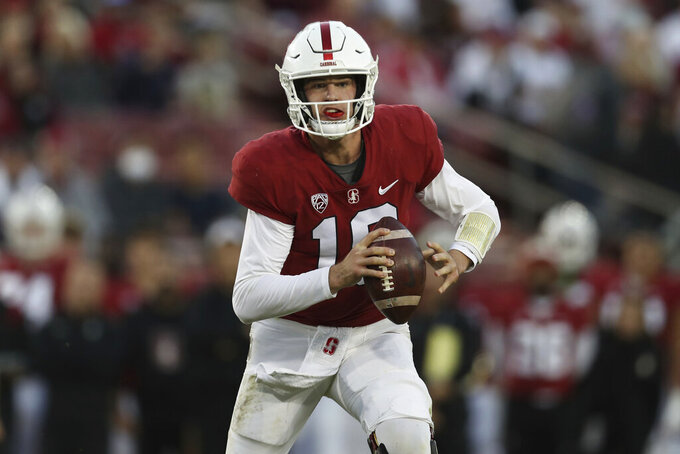 FILE - Stanford's Tanner McKee looks to pass against California during the first half of an NCAA college football game in Stanford, Calif., on Nov. 20, 2021. (AP Photo/Jed Jacobsohn, File)

The Cardinal look to get off to a good start after losing the final seven games last season on the way to a 3-9 record that was the worst season on The Farm since a one-win season in 2006 the year before Jim Harbaugh arrived to turn thing around. Colgate gets a rare opportunity against a Power Five team.

The trenches. The Cardinal should have a decided advantage on the lines against a lower-level school after struggling there last season. LT Walter Rouse anchors an offensive line that returns all five starters, while DT Tobin Phillips anchors a defensive line that needs to rebuild after losing several key players.

Colgate: QB Michael Brescia. Brescia was the 2021 Patriot League Rookie of the Year last season. He started five games, passing for 614 yards and two TDs, and rushing for 567 yards and nine scores.

Stanford plays its first FCS opponent since Sept. 15, 2018, against UC Davis. ... The last 38 games for the Cardinal have been against either Power Five or ranked teams since that game against the Aggies in 2018. ... Stanford returns players who produced 92% of the team's yards passing last season, 86.8% of the yards receiving and all starts on the offensive line. ... Colgate has lost its last nine games against FBS teams since beating Buffalo 38-15 on Sept. 13, 2003.