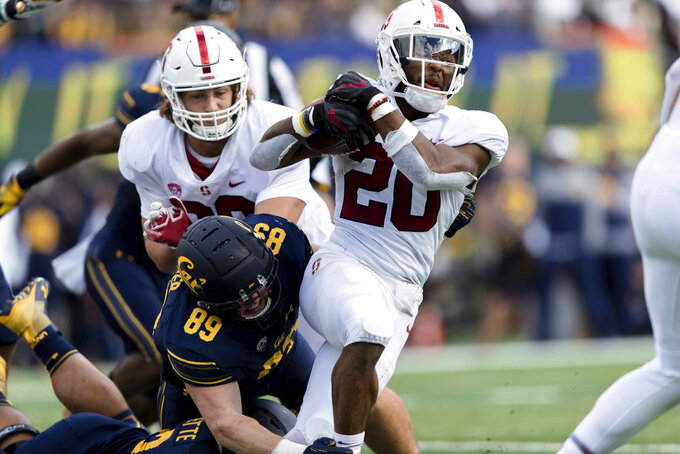 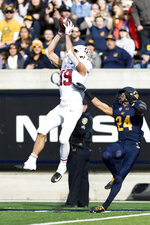 BERKELEY, Calif. (AP) — Paulson Adebo took away the ball so Stanford could hold onto the coveted Axe.

Adebo made two interceptions in the fourth quarter, including a spectacular one-handed grab in the end zone, to help prevent the game-tying score, as Stanford relied on its defense to win its ninth straight Big Game, 23-13 over California on Saturday.

"It means a lot just knowing how much this game means to both schools, the alumni, our seniors, sending them out having never lost to California," Adebo said. "It was big."

Scarlett added a 3-yard score to seal it late in the fourth quarter after Adebo's second interception.

"It's big, especially my senior year going for a fourth year in a row, making sure we send all the seniors and fifth years our on the right foot," Scarlett said. "It's a great feeling to keep The Axe."

While Scarlett provided the touchdowns, Adebo delivered the biggest highlight with Stanford protecting a 13-6 lead in the fourth quarter. Chase Garbers took a deep shot, Adebo dived for it and cradled the ball in his right hand as he hit the ground and did a summersault.

"He's an incredible player," Cardinal linebacker Bobby Okereke said. "He's a magician with the ball in his hands. It's crazy."

Bryce Love lost a fumble the play after Adebo's interception but Stanford's defense stepped up again and forced a field goal that Greg Thomas missed from 36 yards to keep the score 13-6.

The Cardinal then burned more than seven minutes off the clock, with help from a third-down roughing the passer penalty against Tevin Paul, before making it a 10-point lead on Jet Toner's third field goal of the day.

This year's matchup featured both teams with at least seven wins for just the second time in the past 27 seasons. The game was delayed two weeks after being postponed on Nov. 17 because of unhealthy air conditions from Northern California wildfires.

There was a boisterous crowd hopeful the Bears would end their Big Game slump but Stanford started fast. Costello picked apart Cal's defense on the opening drive to set up Toner's 26-yard field goal and Scarlett added has long score on the second drive.

Thomas kicked two field goals in the second quarter for Cal but 290-pound fullback Malik McMorris lost a fumble late in the half and the Cardinal drove down for a field goal in the final seconds that made it 13-6 at the break.

"We wanted it really bad," Garbers said. "These seniors haven't beat Stanford, so our goal was to send them out a winner. As underclassmen, we failed at doing that. It hurts a lot because you feel you let your teammates down."

Stanford: The Cardinal's season-long inability to run struck again with Love capping his final regular season game by rushing for just 74 yards on 22 carries. Costello managed to connect with JJ Arcega-Whiteside on a couple of big passing plays and threw for 237 yards overall but the Cardinal weren't able to generate much consistency.

California: The Bears once again got little from their passing game with Garbers going 22 for 39 for 197 yards, two interceptions and an 11-yard TD pass to Jordan Duncan with 10 seconds left. Garbers did manage to scramble for 44 yards and Patrick Laird had a 62-yard run and finished with 116 yards on the ground but Cal couldn't manage to get into the end zone until the game had been decided.

Stanford: Bowl game to be determined.

California: Bowl game to be determined.