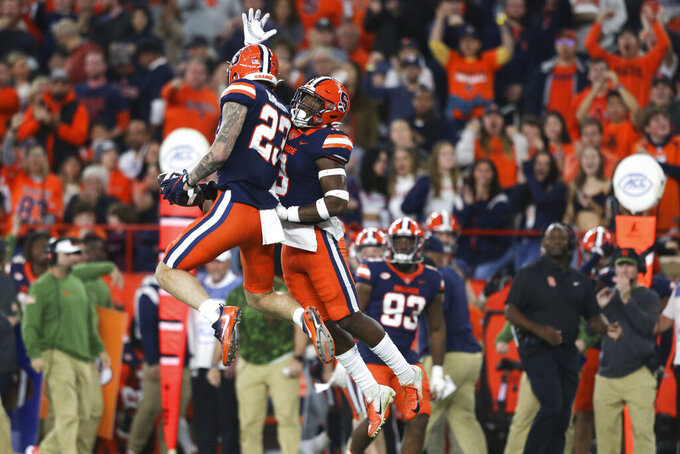 Syracuse defensive back Justin Barron (23) and linebacker Mikel Jones (3) celebrate a fumble recovery during the first half of the team's NCAA college football game against Florida State on Saturday, Nov. 12, 2022, in Syracuse, N.Y. (AP Photo/Joshua Bessex) 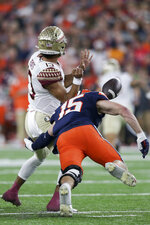 Travis threw for three touchdowns, caught a scoring pass and ran for another score, and No. 25 Florida State beat reeling Syracuse 38-3 on Saturday night, the Orange’s fourth straight loss.

"He’s a really good quarterback and embraces what we lay out. He did a great job executing the offense. It was an awesome performance,” FSU coach Mike Norvell said. “We wanted to make a statement and they made a great statement.”

It was the last conference game for Florida State (7-3, 5-3 Atlantic Coast Conference), which has won three straight since a midseason skid and last week overwhelmed Miami 45-3. Syracuse (6-4. 3-3) lost its second straight at home and it was ugly. The Orange notched just nine first downs to 25 for FSU, were 1 of 11 on third-down conversion attempts, and were outgained 420-160, and the defense was on the field for more than 36 minutes for the third straight game.

“Maybe we need to get away and circle the wagons,” Orange coach Dino Babers said. “We've got to find a way to get into the end zone.”

Florida State entered the game leading the country with 69 plays of 20-plus yards and quickly tacked on another when`Trey Benson bolted around the left side for 27 on the Seminoles’ first possession. Five plays later, Travis scored on a 3-yard run up the middle for a 7-0 lead. Florida State has scored on 13 of 19 first drives of a half this season, with 12 touchdowns.

Travis, who was 21-of-23 passing for 155 yards, hit Malik McClain for a 15-yard touchdown late in the first for a 14-0 lead as the Orange struggled offensively despite the return of quarterback Garrett Shrader, who had missed six straight quarters with an undisclosed injury. Shrader finished 6 of 17 for 65 yards with one interception and rushed for minus-2 yards on 10 carries.

“I feel all right,” Shrader said. “I felt like I was ready to play. It happens."

Syracuse's first three possessions were three-and-outs, and even when the defense snared a turnover the offense failed to capitalze.

Travis lost a fumble when he was sacked by linebacker Derek McDonald early in the second and Justin Barron recovered for the Orange at the FSU 23. Syracuse then lost 12 yards on the next three plays and Andre Szmyt missed a 53-yard field goal, just his third miss in 18 attempts this season and first miss in three tries from 50 yards or longer.

The Seminoles struck again late in the second quarter when Travis hit Johnny Wilson for a 24-yard touchdown. Wilson shed a tackle attempt by defensive back Duce Chestnut along the right side and scooted into the end zone with 5:47 left for a 21-3 lead

Ryan Fitzgerald's 40-yard field goal — after an Orange timeout nullified his first make — gave the Seminoles a 24-3 lead at the break.

Travis completed a 5-yard scoring pass to Kentron Poitier after an unsuccessful onside kick by Syracuse gave FSU the ball in Orange territory to start the second half, and he completed his stellar night by catching a 2-yard TD pass from tight end Wyatt Rector late in the third. Benson rushed for a career-high 163 yards on 18 carries, his third straight standout game.

The Seminoles barely made it into the Top 25 this week and are certain to keep rising.

Florida State: The Seminoles were ranked at the end of September before a three-game losing streak knocked them out of the rankings. They’ve recovered nicely and are on a serious roll behind Travis.

Syracuse: The Orange finished last season with three straight lopsided losses to miss the postseason, its five wins just one shy of qualifying. They’ve already made the grade this year, but injuries to key players have derailed their early season momentum.