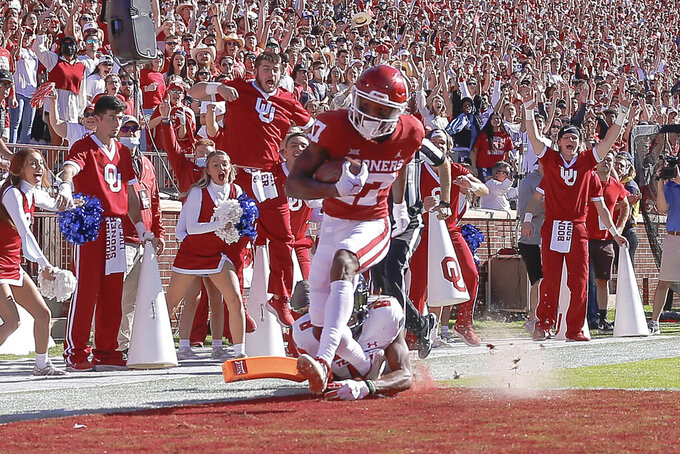 The man who helped build dominant defenses in 26 years as an assistant coach at Kansas State, Oklahoma and Clemson will make his head coaching debut Saturday when ninth-ranked Oklahoma hosts UTEP.

“The excitement, the anticipation is real,” Venables said. “Our guys have worked incredibly hard for the last eight months – coaches and players – preparing for this. This is what you work for. ... It’s that time to play somebody else, to go compete and kind of see where we are at.”

Venables, 51, plans to keep his typical energy on the sideline.

“That’s always who I’ve been,” he said. “When you love what you do, I think that shows. To me, I think that’s how I was as a player. As a coach, I think it comes from a thankfulness, having a gratitude for whatever opportunity that you have as well.”

The fan base has shared Venables'' energy since coach Lincoln Riley left the Sooners for Southern California. The Sooners believe they can thrive with quarterback Dillon Gabriel, a transfer from Central Florida who already has passed for 70 touchdowns and more than 8,000 yards in his career.

Gabriel isn't the only new face. More than half the roster has never played in a game for Oklahoma, leaving the Sooners feeling like they have much to prove.

“There’s a definitely like a chip on our shoulder just to come out and play ball,” sad Oklahoma receiver Marvin Mims, one of the top holdovers. “I mean, not even really about who we lost, but just to go out and play ball with a new culture, new team, new identity. We just want to go out there and show that.”

Venables won’t take UTEP lightly. He played for Kansas State when UTEP coach Dana Dimel was an assistant there, and they later were assistant coaches together at Kansas State. And though the Miners lost their opener 31-13 to North Texas, Venables said the game was a few plays from going in a much different direction.

“They’re a bowl team,” Venables said. “Dana’s done a great job building that program the right way, with confidence and toughness and physicality.”

Dimel said UTEP will approach the game as though it has nothing to lose.

“Any time you play a top-10 team like this and you’re a Group of Five team, that’s part of the mentality that you take,” he said. “No one is expecting you to win the game, but if you can win the game, it would be a really big step for your program.”

It will be the first time since the start of the 1999 season that Cale Gundy won’t be an assistant coach for the Sooners.

Gundy, who was an assistant head coach and a receivers coach, announced his resignation on Aug. 7. The school said the next day that he uttered a racially charged word multiple times while reading off a player’s device during a film session the previous week.

Gundy, a former Oklahoma quarterback, was involved in more victories as a player and coach than any player in school history, with 235 wins as an assistant coach and 31 as a player.

UTEP quarterback Gavin Hardison passed for 293 yards and rushed for 29 in the opener. His 3,217 yards passing last season were fifth on the school’s single-season list.

“Their best player arguably is the quarterback,” Venables said. “He’s a great leader, everything goes through him. Really tough guy.”

UTEP receivers Reynaldo Flores and Tyrin Smith had solid performances in the opening loss to North Texas. Flores caught eight passes for 122 yards and Smith caught seven for 127 yards and a touchdown.