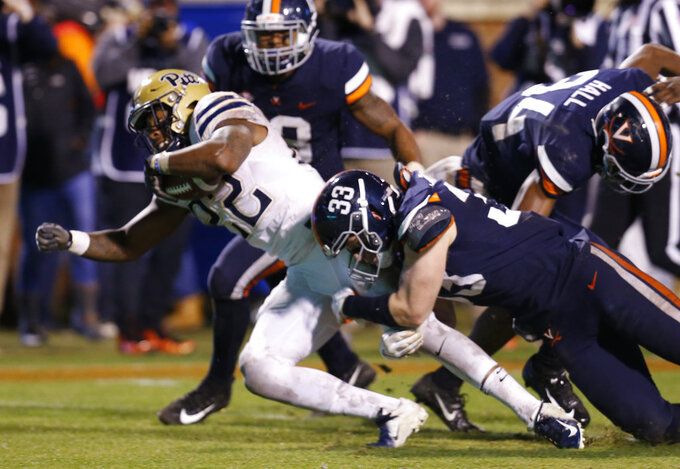 Pittsburgh running back Darrin Hall (22) lunges into the end zone for a score as Virginia linebacker Zane Zandier (33) holds on during the second half of an NCAA college football game in Charlottesville, Va., Friday, Nov. 2, 2018. (AP Photo/Steve Helber)

There was no need. Narduzzi is well aware his players know where the Panthers (5-4, 4-1 ACC) sit heading into Saturday's visit from Virginia Tech (4-4, 3-2): in first place and in control of their own destiny.

"I'm not going to address it," Narduzzi said Monday. "There's still a bunch of hungry teams sitting below us. Doesn't really matter. I know they read on Twitter all that stuff. I guess I don't have to address it."

Maybe, but that it's even a topic of discussion is a testament to Pitt's resiliency.

Narduzzi raised eyebrows when he told a group of fans at a kickoff luncheon in August to keep the first weekend of December open so they could plan a trip to Charlotte for the ACC title game. It's a possibility that seemed remote at best after the Panthers were drilled by Penn State and Central Florida and then suffered a baffling loss to North Carolina, all in September.

And yet the Panthers have responded brilliantly, winning shootouts and defensive struggles alike during their three-game conference winning streak. Their taut 23-13 victory at Virginia last Friday may have been the closest they have come all season to fitting Narduzzi's definition of "Pitt football."

"(It's) kind of what you want," Narduzzi said. "(An) old-school game. That's who we are, what the city of Pittsburgh is."

Still, Narduzzi stressed it's far too early for the Panthers to think they've arrived.

"We haven't done anything yet," he said. "We've got a long way to go. Premature victories are no good."

The road to the ACC championship, however, doesn't look quite as daunting as it did six weeks ago. Virginia Tech's bumpy resume includes losses to Old Dominion, Georgia Tech and Boston College. Wake Forest will play the rest of the year without injured starting quarterback Sam Hartman and Miami — the preseason pick to roll in the Coastal — is closer to last place than to first.

All of which makes Pitt the favorite — or the closest thing to one — at getting a shot at the ACC's Atlantic Division champion on Dec. 1. Heady territory for a group that has faced one of the most difficult schedules around.

"I don't think anybody has played five Top 25 football teams in the country, which we have," Narduzzi said. "We faced five of them so far. Wasn't an easy schedule. Everybody knew it wasn't an easy schedule coming into the year. After the game is over, no one says, 'But it's a hard schedule.' What other way would you want it?"

Narduzzi isn't too concerned about his team getting caught up in the hype. Facing the Hokies should be enough. Pitt had a chance to win in Blacksburg last year but lost 20-14 when it failed to score on four plays from the Virginia Tech 1 in the final moments, a defeat that ultimately prevented the Panthers from becoming bowl eligible and one that Narduzzi still finds himself replaying in his mind 12 months later.

Pitt has a chance to erase that memory on Saturday while inching closer to an improbable division title. Not that Narduzzi wants to talk about it. He'd rather his team just go out and play and worry about what it all means later.

He didn't change the way the Panthers practiced when they were struggling in September. He's not going to change anything now that they're rolling in November.

"We do what we do, offensively, defensively, structurally," Narduzzi said. "Our days don't change. We try to keep things as similar, as familiar with the kids as we possibly can."

Even as they prepare for a potential trip to unfamiliar territory.