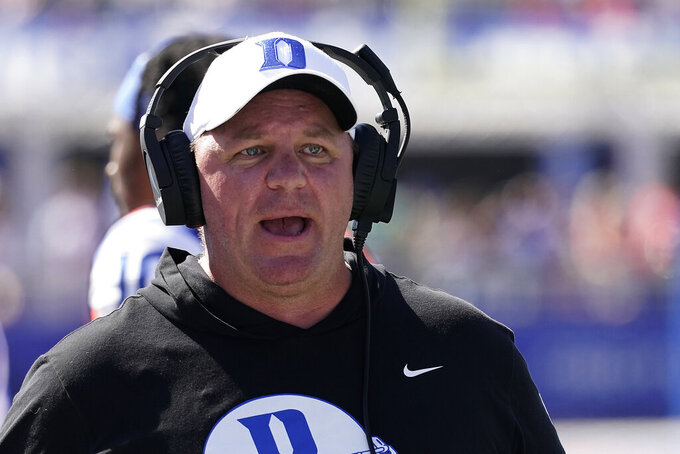 Duke head coach Mike Elko talks to his players during the first half of an NCAA college football game against Kansas Saturday, Sept. 24, 2022, in Lawrence, Kan. (AP Photo/Charlie Riedel)

Natrone Means first arrived at North Carolina to play for Mack Brown as a promising running back, then went on to an NFL career that included a touchdown-scoring appearance in the Super Bowl.

More than three decades later, he's again working to help Brown’s Tar Heels, though now in the kind of supporting role expanding across the Atlantic Coast Conference and the sport.

Titles vary. Analyst. Quality-control coordinator. Even the vaguely defined “special assistant" and “senior adviser." But the directive is the same: Adding more eyes, hands and experience to meet the rising demands of running a power-conference program.

“If that takes some things off of (coaches’) plate and they can focus more on that week’s opponent then obviously we feel like we’ve done our job well,” said Means, now an analyst for UNC's offense.

Means hopes to grow his own coaching career that includes stints in Division II and the high school level, calling this “valuable experience I could not pass up.” It's valuable for programs, too, illustrated by how they have expanded staff sizes in the past decade.

These positions aren’t permitted to directly coach players in games or practices like assistant coaches or graduate assistants. Instead, they work behind the scenes. Some review film or dig for statistical trends. Others scout future opponents beyond the focus of that week's game.

They range from former head coaches to up-and-comers forging their own paths.

“It’s not a one-man show," said Clemson defensive coordinator Wes Goodwin, previously an analyst and non-coaching assistant under Dabo Swinney. "There’s a reason we have a whole staff devoted to that type of stuff, just great resources, whether it’s bouncing stuff off the offensive guys or the guys in (the defensive) room.

"You get a second view point from guys that you trust and you know that they put in the time, put in the work. They study the game and know what’s going on. It’s a huge resource, no doubt.”

A look at public records data offers glimpses of investments by ACC schools:

— North Carolina had two quality-control staffers as temporary hourly employees in 2015. There are now seven additional positions – including former South Carolina and Appalachian State head coach Sparky Woods as a senior adviser to Brown – costing more than $520,000 in salaries.

— North Carolina State had three quality control coordinators and two player personnel staffers in recruiting for a combined cost of $228,500 in 2015. Those positions remain today, though there are three additional recruiting staffers along with former East Carolina head coach Ruffin McNeill as a special assistant to head coach Dave Doeren, driving that budget to nearly $766,000.

— At Florida State, the Seminoles have gone from spending more than $275,000 in salaries for eight quality control staffers in 2015 to $790,000 for eight analysts or support positions — including newly created directors of scouting for offense and defense at $125,000 apiece — in 2022.

“It’s such a new age in college athletics (with) high-school players, you get transfers – you’ve got all the different elements of what it is to try to manage your own roster,” said Seminoles coach Mike Norvell, pointing to needing better efficiency in running a program.

That was clear when looking at the league's four new coaches.

“I wanted to make sure we could build an infrastructure to support our student-athletes the right way,” Elko said. “That was something that was critical to me. As we started talking about this job opportunity, it was way more about having the ability to do those things than anything for myself.”

For some, personal connections and timing create the right fit.

McNeill, with nearly four decades in college coaching, took the N.C. State job in 2020 based on his long relationship with Doeren, who he met when Doeren was a Southern California graduate assistant and McNeill was a Fresno State assistant. For Doeren, it gave him “somebody that's been in my seat that I trust and will tell me the truth.”

There was also the pull for McNeill to returning to North Carolina to tend to family needs such as caring for his ailing father in his hometown of Lumberton, about 100 miles from the Wolfpack's Raleigh campus.

How does the man affectionately known as “Coach Ruff” view his role?

“Be the extra eyes and ears, and be here for Dave in any way that he may need me,” McNeill said, pointing to anything from sharing a practice observation to handling a speaking engagement for the program.