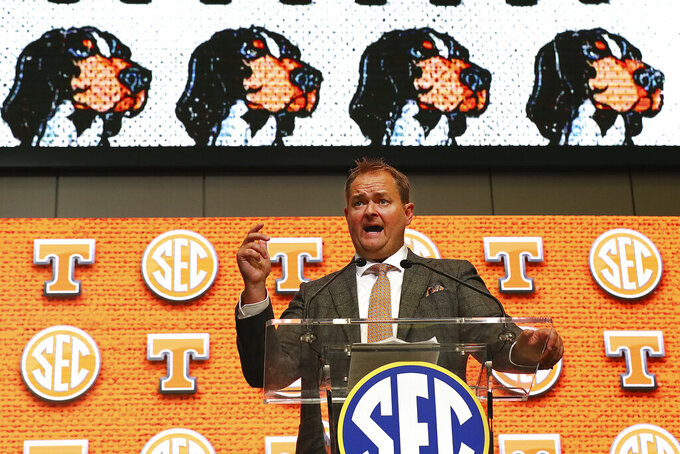 CHARLOTTE, N.C. (AP) — The plan wasn’t for Georgia Tech to lose top running back Jahmyr Gibbs as a transfer to Alabama in the Southeastern Conference. Yet the Atlantic Coast Conference school has found its share of help from the SEC, too, in the form of seven transfers.

It’s a common theme for schools in those leagues amid freer movement through the transfer portal: players shifting from one power conference to the other, often to stay close to home and within an overlapping Southern footprint.

“I think it is kind of a natural move,” said Virginia receiver Keytaon Thompson, who has played two seasons for the ACC’s Cavaliers after spending three seasons at Mississippi State in the SEC.

Gibbs offers a high-profile example for the upcoming season in his move from the Yellow Jackets to the Crimson Tide after ranking third in the Bowl Subdivision ranks by averaging better than 150 all-purpose yards per game.

He’s one of seven players to do so this year among 247sports’ Top 150 ranking of transfers for the upcoming season. That list includes:

The movement has been fruitful for both leagues.

Last year’s Associated Press all-ACC football honors included SEC transfers in Florida State defensive end Jermaine Johnson II (from Georgia) as defensive player of the year and North Carolina running back Ty Chandler (from Tennessee) as a second-team pick. On the SEC side, Georgia defensive back Derion Kendrick was a second-team selection after transferring from Clemson.

Florida State defensive back Jammie Robinson started his career at South Carolina in the SEC. He said he didn’t really see major differences in competition between the leagues after earning AP all-ACC second-team honors last year.

SEC teams “are going to ground and pound and run the ball down your throat,” Robinson said during the ACC’s preseason media days in Charlotte, North Carolina. “In the ACC it’s kind of different. They’re going to more spread and more (run-pass options) and stuff like that. When I got to the ACC, that’s how I was trying to better my man coverage skills.”

That was a factor for quarterback Hendon Hooker as he left Virginia Tech after the 2020 season marred by the COVID-19 pandemic. Ultimately, the Greensboro, North Carolina, native opted for another neighboring-state program in Tennessee — an example of why second-year Volunteers coach Josh Heupel called that regional footprint “extremely critical to us at all times.”

“I definitely had some options to go a little further away from home,” Hooker said during the SEC’s preseason media days in Atlanta. “Me being the family man I am, I would want my family to be at every game. So being four hours away from home is a blessing."

Fourth-year Georgia Tech coach Geoff Collins has an up-close view of the interleague movement from Atlanta in territory both leagues claim as their own.

“There’s a (base) about five, five-and-a-half-hour radius of your campus that you focus on in recruiting,” Collins said. “I think the same thing happens in the transfer portal as well, but then you expand that because they might have gone at a distance and now they want to come back home for whatever reason. I don’t think that’s too uncommon.”

It also goes back to those years-ago recruiting battles for North Carolina coach Mack Brown. The leagues have four overlapping states in Florida, Georgia, South Carolina and Kentucky. That creates plenty of battles for high school recruits as both leagues mine that fertile territory, and those ties linger when a player decides later to transfer.

“What I’m seeing more is (coaches) are really looking at guys they lose in recruiting, that they think they could’ve gotten because they were very interested,” Brown said. “And then when they leave their other school because they’re unhappy, they’re going to come back home.”

And no one seems to expect the moves to slow anytime soon.