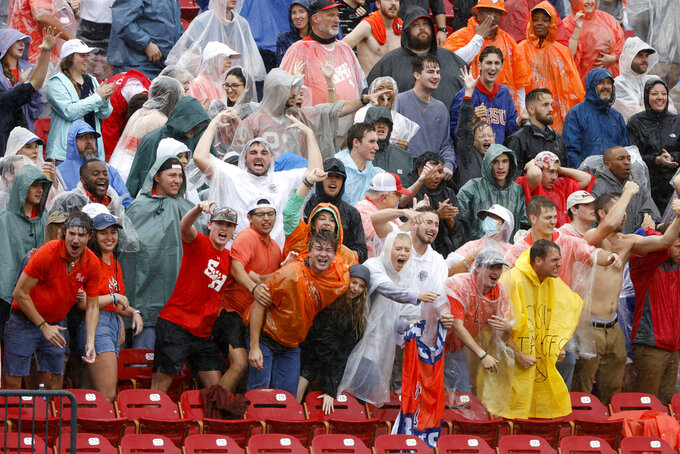 Sam Houston State fans react to a play that was called back against the South Dakota State during the first half of the NCAA college FCS Football Championship in Frisco, Texas, Sunday, May 16, 2021. (AP Photo/Michael Ainsworth)

FRISCO, Texas (AP) — The FCS championship game between top-seeded South Dakota State and No. 2 seed Sam Houston resumed after a delay of about 75 minutes Sunday because of lightning.

After starting in a steady rain with some significant downpours, the game went into a delay with 8:25 left in the second quarter because of lightning in the area. The game was tied 7-7.

NCAA officials said after the completion of the second quarter, there would only be a three-minute halftime break before going into the second half.

When the teams returned to resume play, the rain had mostly stopped, though it was still overcast.

The delay came in the final game of the longest and most unusual college football season, pushed back to a mid-May finish after a spring season for most FCS teams because of the coronavirus pandemic.

It was the same weather system that impacted the final round of the PGA Tour's AT&T Byron Nelson tournament in McKinney, Texas, less than 10 miles away. There were tornado warnings south of the area.