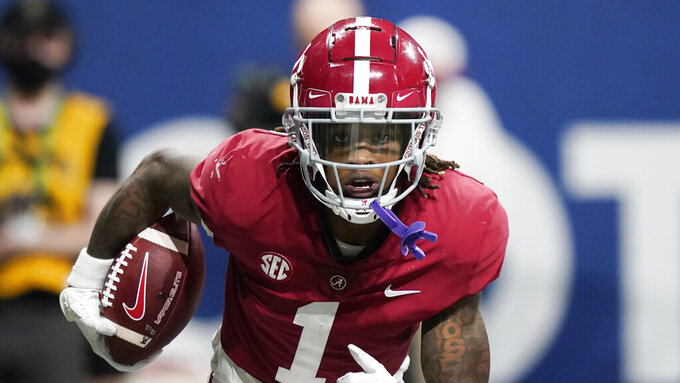 FILE - Alabama wide receiver Jameson Williams (1) runs toward the end zone for a touchdown against Georgia during the second half of the Southeastern Conference championship NCAA college football game, Dec. 4, 2021, in Atlanta. (AP Photo/Brynn Anderson, file)

Georgia and Alabama have used the transfer portal to supplement their annual bounties of top recruits.

Sure, virtually every college football team has utilized the portal to bolster rosters. But Alabama and Georgia did what they do, landing talented gems to help lead them to a national championship.

Georgia helped fill a gaping void in its secondary with former Clemson cornerback Derion Kendrick. The pick-ups have played significant roles in their teams' road to the College Football Playoff championship game Monday night in Indianapolis.

Other teams had much bigger transfer hauls, but also more spots to fill.

Georgia and Alabama were choice destinations for a few top transfers who, like some NFL free agents, want to play for another contender. And were good enough to start for the powerhouse programs.

“You know, it is similar to free agency but without the rules, to be honest with you,” said Alabama offensive coordinator Bill O'Brien, a former Houston Texans head coach. “There are some rules in college, but the portal is an interesting deal.”

And a gold mine for his offense, which had to replace Heisman Trophy-winning receiver DeVonta Smith and fellow NFL first-rounder Jaylen Waddle.

Alabama’s offense would not be as potent without the All-American Williams, who had seven catches for 184 yards and two touchdowns against the Bulldogs in the Southeastern Conference championship game. Said O’Brien, “Obviously he’s a huge part of our success.”

The Tide have already landed LSU cornerback Eli Ricks and Georgia Tech running back Jahmyr Gibbs to fortify those positions next season.

After catching 15 passes for 266 yards and three touchdowns in two seasons with the Buckeyes, the speedy Williams emerged this season as a likely first-round NFL draft pick whenever he turns pro.

Williams left the receiving logjam at Ohio State to play for a team where he could get more opportunities. He said the Tide’s recruiting pitch was “that I would be an excellent add-on to the offense.”

“And as the season went on, we kind of all saw how I was used in the offense and everything,” Williams said. “Complemented me, complemented the other receivers. We all just came together and we had a great offense this year.”

Kendrick fit right into the nation's top defense at Georgia.

He arrived in Athens after earning first-team All-Atlantic Coast Conference honors at Clemson and has started all 14 games for Georgia. The Bulldogs had lost four starters in the secondary and six other defensive backs.

They also signed West Virginia's Tykee Smith, a third-team AP All-American in 2020 who only played in one game because of injuries.

Unlike Williams and To'oTo'o, off-the-field issues at Clemson left him looking for a new team. Kendrick missed three games last season and was dismissed after being arrested in Rock Hill, South Carolina. He was charged with unlawful possession of a gun and simple possession of marijuana.

The charges were expunged from his record after Kendrick completed a pretrial intervention program.

“If you follow football, everybody knows what happened in my situation,” Kendrick said. "Being thrown into the portal, nobody had to take a chance on me at all but they did.

"And when I got here, I mean, I just fit in, just doing what I do. Just came in, put my head down and put in the work. They accepted me for who I was and not what happened in the past."

Unlike his Georgia teammates, Kendrick has been on the winning end of a game against the Tide. Clemson won the national championship game against Alabama in the 2018 season, when as a freshman Kendrick played wide receiver and on special teams.

To'oTo'o is the only one of the three who came from a struggling program. He left Tennessee after a 3-7 season that ended with the firing of coach Jeremy Pruitt.

Already familiar with the defense after playing under Pruitt, a former Alabama defensive coordinator, To'oTo'o stepped right in as starter and signal caller.

He leads the team with 106 tackles and has eight tackles for loss and four sacks.

“It’s been a huge blessing to be able to be in the position that I am and being able to be in this game with the group of guys and the coaches,” To'oTo'o said. "It’s been a blessing. I can’t complain about anything I’ve been through.

“I love every single part of my road.”

This season, that road for all three transfers ends with a shot at the national title.