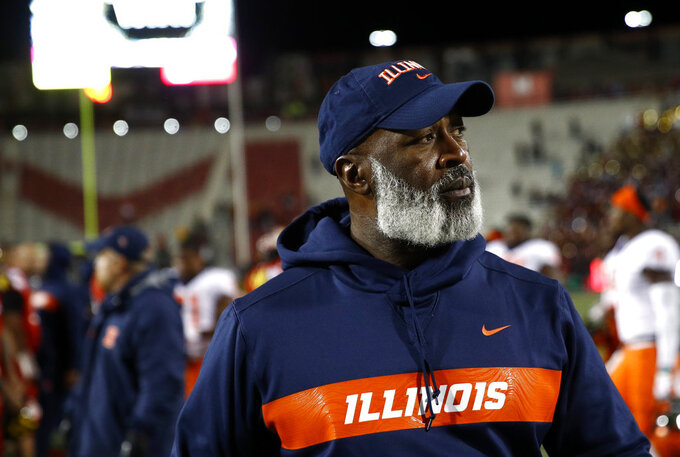 Coach Lovie Smith said Nickerson told him it was in the program's "best interest" to leave. The former NFL linebacker had been defensive coordinator and linebackers coach for more than two seasons after joining Smith and the Illini in 2016.

In year three under Smith and Nickerson, the defense has allowed 52.6 points per game during the last three weeks in blowout losses to Purdue, Wisconsin and Maryland — all losses. The Illini lost to Maryland 63-33 on Saturday, giving up more than 700 yards.

"Hardy informed me yesterday that he felt it was in the program's best interest to leave our staff," Smith said. "I've known and coached with Hardy for many years, and know what an outstanding person he is. We are all disappointed in the performance of our defense this season, and we all bear responsibility for that. I wish Hardy nothing but the best as he moves forward with his career."

The Illini (3-5, 1-4 Big Ten) have been hurt by big plays despite a defense that had returned eight starters this season. Illinois hosts Minnesota (4-4, 1-4) on Saturday.

"When I was contacted about being offered this job back in 2016, I was excited for the opportunity to come in to coordinate and run Illinois' defense," Nickerson said in a statement provided by the school. "I had every intention of helping put our defensive student-athletes in the best possible position to win, and, ultimately, to make the University of Illinois community and fans proud of our results. Due to health-related circumstances beyond my control I must step aside at this time."

Nickerson is the second defensive assistant to leave the team since August. Cornerbacks coach Donnie Abraham resigned less than three weeks before the season opener. Abraham and Nickerson both played for Smith in the NFL. Lovie Smith's son, Miles, has taken over as an assistant. Smith himself is expected to call plays for the defense for now.

Illinois is ranked 106th nationally in scoring defense, 125th in total defense, and 116th and 120th in rushing and pass defense, respectively.

In another blow, redshirt defensive tackle Lere Oladipo has been suspended after being arrested in Champaign early Sunday on charges of domestic battery. Oladipo, 20, was arrested in a university parking lot after responding to a call and finding a woman with a minor injury to her lip, according to a spokesman for the University of Illinois police.

Oladipo was released Sunday on $1,000 bail, police said. He has played in four games this season, totaling seven tackles, and made one start.