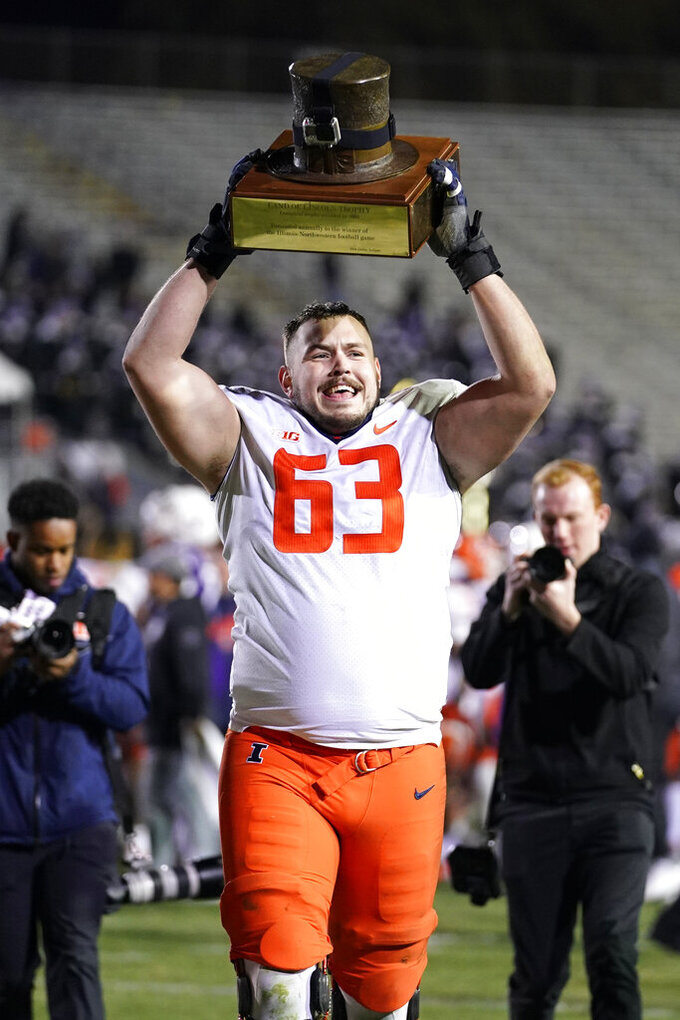 EVANSTON, Ill. (AP) — Safety Sydney Brown returned a touchdown and an interception for scores and Illinois snapped a three-game losing streak with a 41-3 rout of Northwestern on Saturday.

Brown raced 53 yards for a touchdown after Northwestern quarterback Cole Freeman fumbled, then sprinted in for a 39-yard score off an interception, both in the third quarter.

Illinois (8-4 overall, 5-4 Big Ten) entered with a chance to win the Big Ten West and advance to the conference championship for the first time. However, Purdue defeated Indiana 30-16 to win the division title and will play Michigan at Indianapolis next Saturday.

It just won't be for the Big Ten crown.

“This year we were a game shy of making it to Indy, and a lot of positive steps for our program," Bielema said, "I couldn't be more excited about this team and where we're at, but more importantly where we're going.

“We lost four (conference) games that were one-score games," Bielema added. “That will motivate and galvanize, whatever, you want to say to myself and the coaching staff during the offseason as much as anything — those four that got away from us.”

Brown's twin brother, running back Chase Brown, punched in a 1-yard touchdown and finished with 61 yards on 19 carries. He entered leading the nation in yards rushing with 1,582 yards but fell short of Mikel Leshoure’s single-season school record of 1,697 in 2010.

Sydney Brown was trying to digest scoring twice off defensive plays, something he hadn't done since high school in London, Ontario.

“I love interceptions, that's always on my mind,” Brown said. “Anyway I can get in the box (score), that's fun.”

But he really wanted more yards for his brother.

“I said it to him on the side, if I get another turnover I'm going to reverse the field on the 20, 25 just so you can go get the rushing record. That's all I wanted for him today.”

But Bielema didn't push Chase Brown, who played with an injured ankle.

“Chase, I just didn't want to put him back in there at the end,” Bielema said, while joking that he might have put brother Sydney in at tailback. “I just thought it was something I didn't want to press the envelope on today.”

Tommy DeVito threw for 136 yards on 12-for-18 passing and ran for a touchdown, and Reggie Love III scored on 2-yard touchdown run to get the Illinois offense rolling. Caleb Griffin kicked a pair of field goals as the Illini finished with eight or more wins for the first time since the 2007 Rose Bowl team finished 9-4.

The Illini have a winning conference record for the first time since 2007 when they went 6-2.

The Illini handed Northwestern its 11th straight loss following a season-opening win over Nebraska in Dublin, Ireland. The Wildcats, 1-8 in the Big Ten, managed only Adam Stage’s field goal.

Northwestern seemed be getting on a roll with several drives in the first half, but Freeman, a second-year walk-on, threw three of his four interceptions in his second career start.

Freeman was replaced by Jack Lausch after his fourth interception.

Bielema fought back tears in the postgame presser, but not because his team narrowly missed the Big Ten title game.

Bielema's mother, Marilyn, died on Thursday, Nov. 17, but he was on the sidelines two days later against Michigan.

Following the win over Northwestern, Bielema revealed that his father-in-law, Greg, had passed away last Tuesday in Florida. The coach traveled to services and didn't rejoin the Illini until Friday night.

“I never saw my team again until late last night,” Bielema said. “I just knew from watching them last night and their intensity today that they were going to play pretty well.”

Bielema said was close to his father-in-law.

“He and I did fishing trips,” Bielema said. “I even took him to Vegas. Who takes their father-in-law to Vegas, right?"

Illinois: The Illini continue to progress under Bielema, improving on their 5-7 overall and 4-5 conference records in 2021.

Northwestern: Error-prone and injury-raked, Northwestern became decreasingly competitive as the season wore on and the losses grew more lopsided.

Illinois: The Illini expect a bowl invitation. After that, they’ll host Toledo in their 2023 season opener.

Northwestern: Opens it 2023 scheduled on Sept. 2 at Rutgers. It should be the final season for the Wildcats in 97-year-old Ryan Field, slated to be demolished and replaced with a privately funded 35,000-seat stadium.