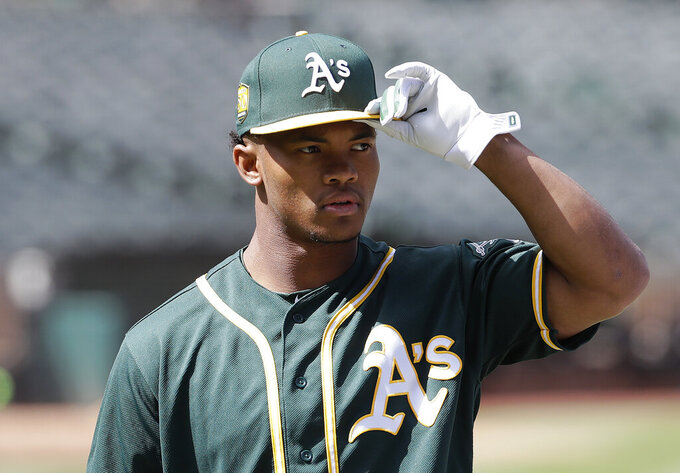 FILE - In this June 15, 2018, file photo, Oakland Athletics draft pick Kyler Murray looks on before a baseball game between the Athletics and the Los Angeles Angels, in Oakland, Calif. Murray's locker remained empty on Monday, Feb. 11, 2019, in the spring training clubhouse of the Oakland Athletics, who say they are uncertain when or if the Heisman Trophy winner will report to the baseball team he signed with last summer. Billy Beane, Oakland’s executive vice president of baseball operation, said talks are continuing with Murray, who may drop baseball to pursue an NFL career. (AP Photo/Jeff Chiu, File)

MESA, Ariz. (AP) — When Kyler Murray won the Heisman Trophy at Oklahoma last season, the Oakland Athletics knew there was a chance he might chose football over baseball.

That is exactly what happened.

On the day the A's started spring training workouts, Murray said he will pursue a career in the NFL.

"I am firmly and fully committing my life and time to becoming an NFL quarterback," Murray tweeted . "Football has been my love and passion my entire life. I was raised to play QB, and I very much look forward to dedicating 100 percent of myself to being the best QB possible and winning NFL championships. I have started an extensive training program to further prepare myself for upcoming workouts and interviews. I eagerly await the opportunity to continue to prove to NFL decision makers that I am the franchise QB in this draft."

Murray passed for 4,361 yards and 42 touchdowns last season as the Sooners landed a second straight College Football Playoff berth. He ran for 1,001 yards and another 12 scores, posting the second-best passer efficiency rating in Bowl Subdivision history.

He declared himself eligible for April's NFL draft last month. He is not a prototypical NFL quarterback at just 5-foot-10 and 195 pounds, but his skills make him an intriguing option.

The A's thought so, too.

Murray was the ninth overall pick in last June's baseball amateur draft, and the outfielder agreed to a minor league contract with Oakland for a $4.66 million signing bonus. The deal called for him to receive $1.5 million after approval last summer by Major League Baseball and $3.16 million on March 1. Murray must return six-sevenths of the money he received, or $1,285,714. While there is a provision for a team to get an extra draft pick in the following draft if it fails to sign a player selected prior to the fourth round, there is no such provision for a player who signed and then decided not to play.

Oakland had a locker with a No. 73 jersey waiting for Murray at its facility in suburban Phoenix.

"We took the best athlete on the board and who we thought was probably the best baseball player on the board, too," Athletics general manager David Forst said. "We've known all along this was a possibility. We knew he had a great option in the NFL, so we've known for a while that there was a chance this was going to happen."

Murray showed off his skills taking batting practice at the Coliseum in an A's uniform back in June, greeted by "WELCOME TO OAKLAND" on the big scoreboard with his photo. That was before he led the Sooners to the Big 12 Conference title behind his blazing speed and pinpoint throws.

Bo Jackson and Deion Sanders played both football and baseball, but Jackson was a running back and Sanders a cornerback.

"Quarterback is a very demanding position, as is being a Major League baseball player," said Billy Beane, Oakland's executive vice president of baseball operations. "To say somebody could or couldn't, I'm not here to say that. Something like that is something that is part of our private discussions."

A's manager Bob Melvin added: "He's one of those rare athletes, who I think any sport that he played, he'd probably excel at."