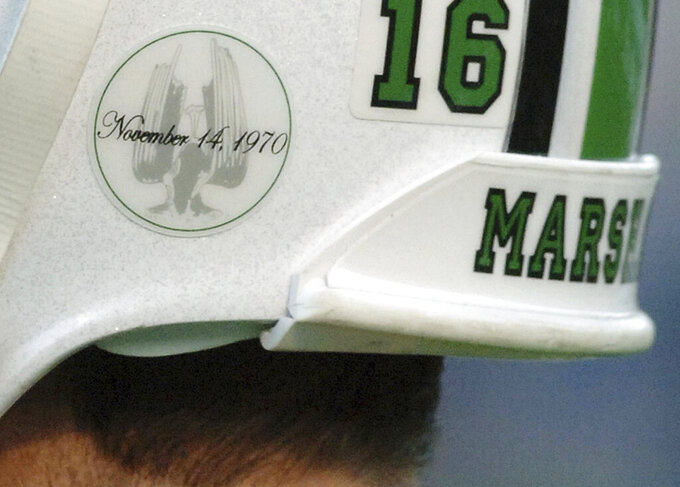 FILE - In this Nov. 19, 2005, file photo, Nov. 19, 2005, a of the Memorial Fountain at Marshall University's student center adorns quarterback Jimmy Skinner's helmet in Huntington, W.Va. The fountain is dedicated to the memory of 75 people killed in a Nov. 14, 1970, plane crash. Among the victims were 36 Marshall football players. (AP Photo/Jeff Gentner, File)

HUNTINGTON, W.Va. (AP) — Born some three decades after the worst sports disaster in U.S. history, Grant Wells and his Marshall teammates are well schooled in the history, importance and the honor of wearing a jersey that has been passed down to them.

No. 16 Marshall hosts Middle Tennessee on Saturday on the 50th anniversary of a plane crash that killed 75 people, including most of the Thundering Herd football team.

"This is the most important game we play all year," said Marshall coach Doc Holliday. “Not even close.”

Wells, a redshirt freshman, grew up 50 miles away in Charleston and knows all about Marshall football's past. Being the quarterback and the local kid that leads his offense in the crash's silver anniversary game is emotional.

“Oh man, I don’t know if I can put that into words,” Wells said. "I’ve grown around the story. I’ve learned about it since I could throw the ball. Representing the Herd, especially in this game on the 50th anniversary, it’s going to be surreal. I can tell you that this team is already looking forward to that game.”

Marshall (6-0, 3-0 Conference USA) is trying to keep its focus as it marches toward a possible berth in the league championship game. But behind quarterback Asher O'Hara, Middle Tennessee (2-5, 2-3) beat the Thundering Herd at home last year.

The 36 players who died in the crash will receive degrees from Marshall in their fields of study on Friday. Before Saturday's game a remembrance to the 75 victims is set at the Memorial Fountain on the Huntington campus.

Middle Tennessee is paying its respects, too.

Blue Raiders wide receiver CJ Windham knows all about personal loss. His mother, Rena Windham, died of cancer in 2018. In the first game after her death two days later, he caught a touchdown pass against Vanderbilt, looked up to the sky and blew her a kiss.

The Marshall story “means a lot to me,” Windham said. "As a kid, I’ve seen the movie ‘We are Marshall’ quite a few times. I see what that means to that program and how significant that was. Getting to play them on this particular date is special to me. I know it’s special to them.

"Of course, we’re going to stay focused and try to do what we’ve set out there to go do.”

Some other things to know about the Thundering Herd and Blue Raiders:

Marshall has handled mobile quarterbacks so far this season and O’Hara might be the most gifted of them all.

Last year he threw for 261 yards and ran for 76 against the Thundering Herd. This season the junior's 476 rushing yards are the third most for a quarterback nationally.

“That quarterback, O’Hara, he’s a pain in the neck,” Holliday said. “He’s fearless."

Marshall has the nation’s third-best defense, giving up seven touchdowns all season and allowing 253 yards per game, including just 67 on the ground. The unit is averaging 3.5 sacks.

“I’ve seen that they have a lot of experienced guys, a lot of guys with a lot of starts that have been in a lot of, I guess, big-time situations," Windham said. “They understand the game.”

Middle Tennessee has not played since Oct. 24, but not by its own choice.

Charlotte’s COVID-19 issues forced last week’s game against the Blue Raiders to be called off. The postponement came a day before the game and kept Middle Tennessee from getting extra work for Marshall — or any other break.

“We’ve had a good couple of weeks,” MTSU coach Rick Stockstill said. “It’s not an advantage, because we didn’t spend any extra time working on Marshall … but it is what it is. You can’t control it.”

Middle Tennessee is 2-2 on the road, including a double-overtime win at Rice three weeks ago.

Marshall’s veteran offensive line has allowed just five sacks all season while opening holes for running back Brenden Knox, who is going after his sixth straight 100-yard rushing game.

The hard-running Knox “is not afraid to run behind his pads,” Middle Tennessee linebacker DQ Thomas said. “You don’t want to tackle a guy like that for four quarters. Putting it on him before he puts it on us, I think that would be a big thing.”

Marshall has won 83% of its home games since its stadium opened in 1991. Only two other FBS schools have a better winning clip in their current stadiums: Alabama and Georgia Southern.