No. 1 Alabama returns to the field against grieving Kentucky 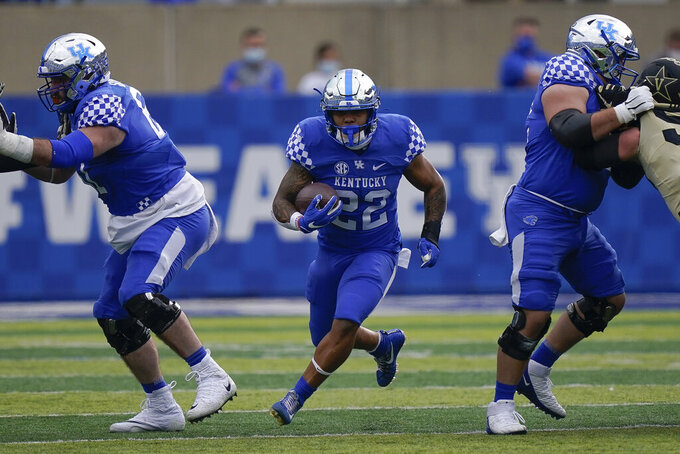 CORRECTS NAME AND POSITION TO RUNNING BACK CHRIS RODRIGUEZ INSTEAD OF LINEBACKER CHRIS OATS - Kentucky running back Chris Rodriguez, center, runs with the ball during the first half of an NCAA college football game against Vanderbilt, Saturday, Nov. 14, 2020, in Lexington, Ky. (AP Photo/Bryan Woolston)

Alabama has merely had to cope with a longer-than-expected stretch in between games. Kentucky has endured an entirely different sort of ordeal.

The top-ranked Crimson Tide is set to return to the field Saturday after a three-week layoff when the Wildcats visit, still grieving the death of offensive line coach John Schlarman.

The Tide had been rolling along on both offense and defense and was coming off a 41-0 win over Mississippi State.

“What I think is really important right now until game time is, you know, players have to get themselves psychologically back into the rhythm of playing games,” said Tide coach Nick Saban, who had his team practice on that suddenly vacant Saturday with that purpose in mind.

As for the Wildcats (2-4), the team paid respects to Schlarman at a memorial Monday before returning to practice Tuesday. He died two days before the Vanderbilt game after battling cancer.

Overcoming that emotional challenge is difficult enough without facing what's ahead on the field: Southeastern Conference division leaders Alabama and No. 6 Florida.

That means Kentucky will face two of the nation's top four passing attacks in back-to-back weeks, starting with quarterback Mac Jones and Alabama.

“It’s been a long time since I’ve seen someone as explosive as they are offensively because they’re so balanced,” Wildcats coach Mark Stoops said. “They’re extremely physical when they want to be and create unbelievable big plays with the talent and receivers they have. Mac is playing at an extremely high level.”

But now the question is will Jones and the Tide have to shake off some rust or immediately resume that high level of play. In a season of disruption, Alabama players say Saban and his unwavering focus helps.

“It does feel kind of weird, but Coach Saban has been doing a good job of keeping reassuring us about the season and being about what we can control,” Tide defensive lineman DJ Dale said.

That two-week lineup poses a big challenge for a defense that gave up two fourth-quarter touchdowns against Vanderbilt.

“We just need to be more consistent," Stoops said. "There’s a lot of things we need to improve on. But the biggest thing is having a great sense of urgency and attention to detail to execute our defense and play at a high level.”

Kentucky running back Chris Rodriguez Jr. rushed for a career-best 149 yards on 12 carries with a 74-yard touchdown against Vanderbilt. The sophomore’s second consecutive 100-yard game has earned the team lead with 562 and six TDs, which also tops the Wildcats. His 6.4-yard per-carry average is the highest among the SEC's top rushers.

Alabama tailback Najee Harris could match or eclipse Trent Richardson in a couple of school career categories. He needs only 40 yards to move into No. 7 on the career rushing yards (Richardson had 3,130). Harris is one TD away from Richardson’s 35, which ranks fifth.

Alabama puts a pair of lengthy streaks on the line. The Tide has won 29 consecutive games against SEC East opponents and an FBS-record 95 in a row over unranked teams. Alabama is favored by some 30 points in this one.

Kentucky lists All-American punter Max Duffy and place kicker Matt Ruffolo first on the depth chart after both missed last week’s game for undisclosed reasons. “You can read between the lines on that,” Stoops said. Colin Goodfellow and Chance Poore handled those respective duties against Vanderbilt.