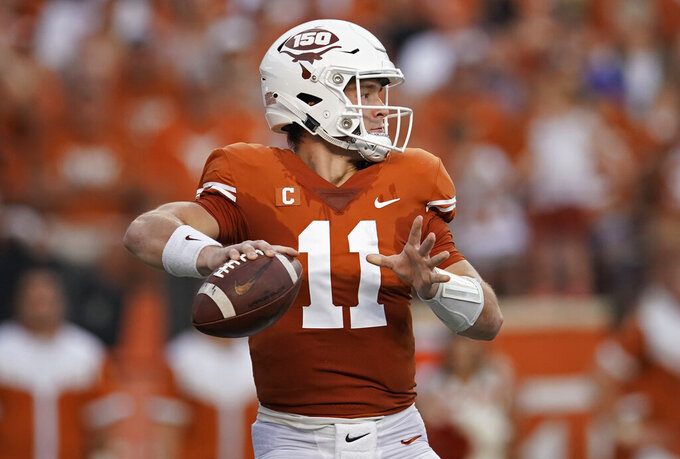 FORT WORTH, Texas (AP) — No. 15 Texas is preparing to face an offense that ranks in the bottom half of the Big 12 for the second consecutive week with a visit to TCU on Saturday.

Not that it did the Longhorns much good the first time around.

A last-play field goal in a 50-48 win over Kansas last week spared the Longhorns (5-2, 3-1 Big 12) a disastrous loss as they try to stay on track for a return to the conference championship game after losing to No. 5 Oklahoma.

But it didn't do much for the sagging confidence of a defense that ranks ninth in the 10-team Big 12 in total yards allowed and last in passing yards.

"None of us are OK or satisfied with that defensive performance just because we won the game," coach Tom Herman said. "Are we happy to win the game? Absolutely. They don't count them any different, but we expect to play much, much better, especially defensively."

The Horned Frogs (3-3, 1-2) are committed to freshman quarterback Max Duggan despite consecutive road losses and an offense that ranks seventh overall and ninth in passing. As usual, though, TCU's hopes start with the Big 12's top-ranked defense.

"I don't know if we'll win a shootout," coach Gary Patterson said. "Now I'd like to win a shootout, but for us at home I think you have to be in the game going into the third, fourth quarter and finding a way win."

"When you're starting nine freshmen or sophomores on defense and you turn the ball over twice in the fourth quarter where we turned it over, that's not real good complementary football," Herman said. "So although the numbers say we played really well offensively, I would argue that situationally we didn't help our defense."

Texas needs Ehlinger to be great every week because the defense is on track to be the worst in program history. He's lived up to his part in a season that has him on course to smash some Texas records. He's thrown for four touchdowns four times already this season. After Kansas went up 48-47 on an easy 2-point conversion with a receiver wide open in the back of the end zone, he bailed out the Longhorns with a drive in the final 71 seconds to Cameron Dicker's winning field goal.

TCU's struggles in the passing game have led to a disappointing season for receiver Jalen Reagor. After having TD catches in seven consecutive games during a 1,000-yard receiving season last year, the junior has just 271 yards and three scores halfway through the season.

"They always plan plays for him," Patterson said. "When it comes to players, usually the defense dictates a lot of that. At least that's what we try to do on defense. We try to dictate who we don't want to get the ball."

A healthy and productive target for Ehlinger is 6-foot-5 receiver Collin Johnson, who caught four passes in Texas' final drive against Kansas. He missed three games because of a nagging leg injury but has played the last two weeks and has resumed his role of go-to guy for Ehlinger.

Since becoming the first TCU player with three straight 100-yard games in 17 years, running back Darius Anderson has been held to 49 yards rushing in a 49-24 loss to Iowa State and 56 yards in a 24-17 loss to Kansas State.

The Longhorns can't cover, stop the run or get to the quarterback. Besides the low rankings in pass defense and total defense, Texas has allowed three 100-yard rushers the past two weeks. The defensive line has only two sacks.