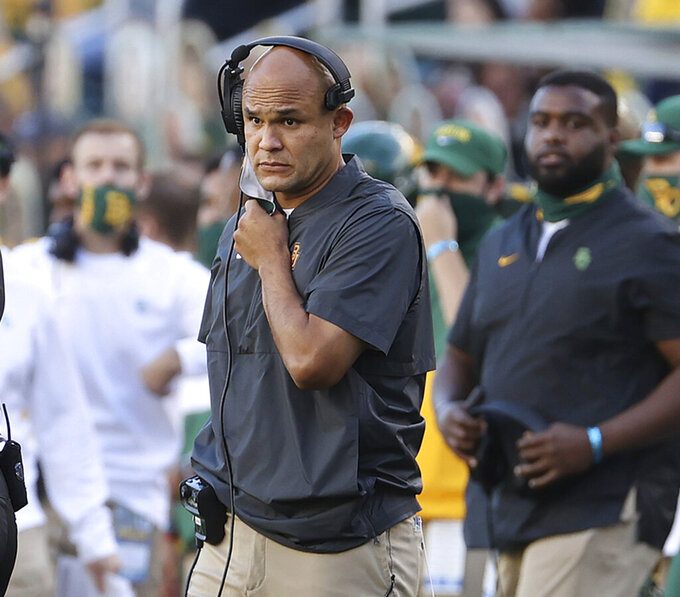 Iowa State has reached that point in the season where the question becomes whether it can finish what it started.

Fifth-year coach Matt Campbell's teams have tended to struggle once the calendar turns to November. Last year they lost three of their last five in Big 12 play after a 3-1 start.

After an embarrassing loss to Louisiana-Lafayette in this year's opener, the season has been marked by the first win over Oklahoma in Ames since 1960 and a three-point road loss to a top-10 Oklahoma State.

The Cyclones bounced back from that with an easy win at Kansas last week, and now they take on a Baylor team that beat them 23-21 in Waco, Texas, last year.

Campbell said he likes the trajectory as his team tries to become one that gets better each week, not to mention making the Big 12 championship game for the first time.

“It takes time, it takes tradition, it takes leadership," Campbell said. "It takes all those things to mold a standard of excellence through the entirety of a season. It’s achievable and something we won’t quit working toward in our football program.”

Campbell acknowledged the disruption caused by the pandemic makes it much more difficult for a team to reach its potential.

“It takes everything to be aligned to do that,” he said. “We're talking about doing that with 18- to 20-year-olds who have a zillion things going on, let alone in a year like this. What I’m asking is really hard. I get that and understand that."

One thing Campbell said he hasn't done, and won't do, is talk to his team about playing for a conference championship — something that hasn't happened at Iowa State since 1912.

“Our kids understand, from day one that I got here, that we want to have the ability to compete at the highest level in this conference,” he said. “I think that’s kind of understood what that looks like and feels like.”

BAYLOR NOT AN EASY OUT

The teams have split four meetings by a total of 29 points since Campbell arrived in Ames in 2016. The Bears have a four-year starter in quarterback Charlie Brewer, the Big Ten's leading tackler in linebacker Terrel Bernard and talented transfers in linebacker Dillon Doyle (Iowa) and defensive end William Bradley-King (Arkansas State).

“I think this is one of the most talented teams we've played," Campbell said. "When I look at Baylor, I look at a championship team. So we'll get their best shot. We know that."

Baylor running back John Lovett and receiver Tyquan Thornton are questionable after getting injured against TCU last week. Lovett has been the team's leading rusher three straight seasons. Thornton has caught passes in only two games.

Bears coach Dave Aranda said he's seeking stability on the offensive line, where there have been four different starting combinations. The line has accounted for 15 penalties in four games, according to Pro Football Focus, and the Bears are tied for 95th with 3.5 sacks allowed per game.

Iowa State is 4-1 in the conference for the second time in program history (2017 was the first). The Cyclones have never been 5-1 in league play since the program started in 1892.

Iowa State’s Breece Hall is running for 150 yards per game to lead the nation among players with at least three games. The Cyclones are averaging 200 yards on the ground to rank first in the Big 12. Baylor is second to last in rushing defense.