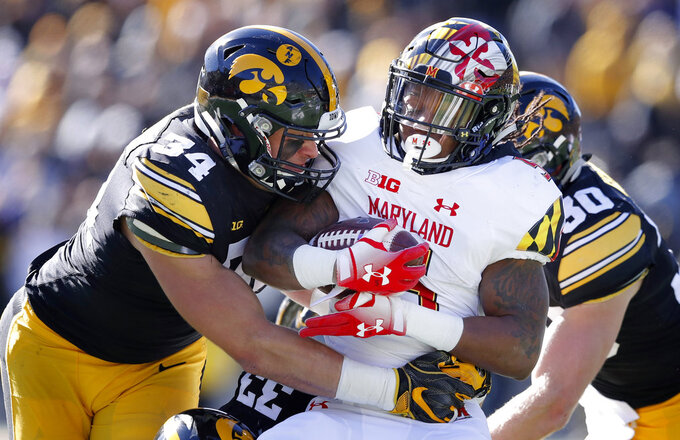 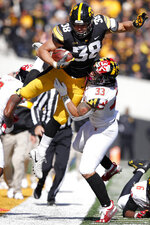 IOWA CITY, Iowa (AP) — On a day when the wind made nearly every play an ugly one, Iowa's defense looked beautiful.

Nate Stanley threw for 86 yards and a touchdown and 19th-ranked Iowa pummeled Maryland 23-0 on Saturday for its third straight victory.

Anthony Nelson added a TD on a fumble recovery for the Hawkeyes (6-1, 3-1 Big Ten), who held the Terrapins to just 115 yards and seven first downs on a day when wind gusts topped 40 mph.

"I'm really happy with our team's performance. When you play a team like Maryland, they really pose some unique challenges for us and you factor in the conditions on top of that," Iowa coach Kirk Ferentz said. "I thought our guys did a really good job of being focused."

But Iowa's front seven never let the Terrapins' attack get going, and its offense used the ground game to grab an early lead and control the ball for more than 40 minutes.

After settling for a pair of short field goals, Iowa went into halftime ahead 13-0 after Stanley found Brandon Smith for a 10-yard TD grab — which Smith made with one hand — with eight seconds left in the second quarter.

Nelson, a defensive end, made it 23-0 Hawkeyes late in the third quarter by falling on a botched handoff from backup quarterback Tyrrell Pigrome in the end zone.

"They controlled the line of scrimmage up front. When we did try to run it up inside, they did a very good job of stopping us," Maryland coach Matt Canada said. "The wind really limited us being able to throw the ball down the field to loosen them up."

Ivory Kelly-Martin ran for 98 yards for Iowa, which had its first shutout since a 28-0 victory at Illinois two years ago.

All three of Maryland's losses have come by at least 21 points.

Iowa: The Hawkeyes are really starting to round into form. If Iowa can upset Penn State next week in State College, talk of the Hawkeyes crashing the playoff party will only gain steam because they should be favored to win their last four games.

Maryland: The Terps' defense simply couldn't get off the field, time and again bullied by an Iowa offensive line that played arguably its best game yet. Illinois ran just 39 plays, compared with 76 for Iowa.

Iowa might make another big jump — the Hawkeyes went from unranked to 19th last week — after an utterly dominant performance. The Hawkeyes have won their last three games by 17, 26 and 23 points.

Maryland looked like it had a good shot at holding Iowa to another red-zone field goal late in the first half. But Byron Cowart got flagged for a personal foul following a Stanley incompletion from the Terrapins 22, and two plays later Stanley found Smith in the end zone.

Hesse, Iowa's senior defensive end, played perhaps the signature game of a brilliant career. Hesse knew exactly when to stay home and when to attack on Maryland's option plays, and he added a sack and two tackles for loss. "They give you a lot of different looks ... it all came down to what we did this week in practice," Hesse said. "Not to sound redundant or cheesy. That's just something you've got to practice."

Ty Johnson was the only Maryland player with more than one catch. He had two, for two yards. ...Iowa was 9 of 18 on third downs and 3 of 4 on fourth downs. ...Tre Watson and Isaiah Davis combined for 29 tackles for Maryland. ...The Hawkeyes wore out Maryland with a 17-play drive in the first quarter that consumed nine minutes and ended with a 23-yard field goal from Miguel Recinos. "Our objective is to get off the field on third down. Unfortunately, we understand when those long drives happen, it's because we failed to do that," Watson said.

Iowa plays at No. 18 Penn State next week in what looks to be the Hawkeyes' toughest road challenge yet.