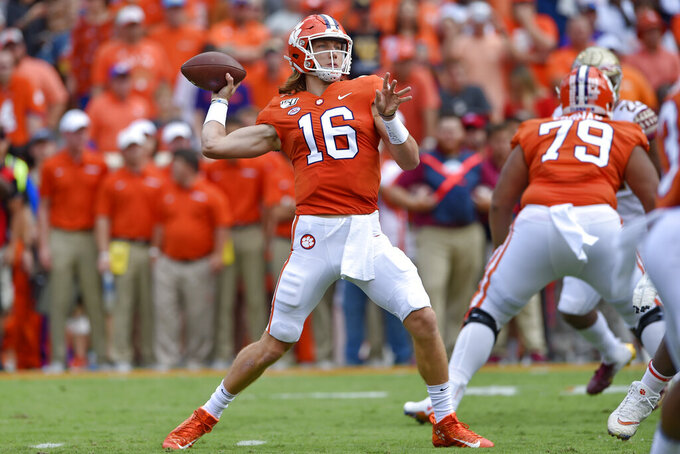 Clemson quarterback Trevor Lawrence drops back to pass during the first half of an NCAA college football game against Florida State Saturday, Oct. 12, 2019, in Clemson, S.C. (AP Photo/Richard Shiro)

CLEMSON, S.C. (AP) — No. 2 Clemson had a dominant answer for those doubting whether the defending national champions could live up to the hype.

The Tigers (6-0, 4-0 Atlantic Coast Conference) spent much of the past two weeks fielding questions about their fitness, focus and drive after needing a 2-point conversion stop late to escape North Carolina 21-20. Clemson relinquished the No. 1 ranking in the AP poll for the first time this season and gave the College Football Playoff chasers plenty of ammunition to pick away at whether the Tigers deserved to be back again.

"I was really proud of the way we responded after two weeks ago," Lawrence said. "It was really good to see."

Except for other college football teams seeking a spot in the final four. Travis Etienne ran for 127 yards and caught Lawrence's other TD. The Tigers' defense collected four turnovers and limited the Seminoles (3-3, 2-2) to season lows with 253 yards and 103 rushing yards.

Most Clemson players and coaches brushed off wanting to make a statement. It was hard not to see that as motivation in this one.

Tigers coach Dabo Swinney pulled out everything he could to make this one a runaway. He had Etienne throw a 23-yard pass to Ross on the opening drive, then went for it on fourth-and-goal from Florida State 3 for Clemson's first touchdown, an inside pass from 3 yards out.

Swinney showed off this year's short-yardage Jumbo package on another fourth-and-short near the FSU goal line with starting defensive linemen Tyler Davis, Xavier Thomas and Nyles Pinckney in formation. But Thomas came up just shy of the touchdown.

Moments later when Clemson got the ball back on Chad Smith's interception with 40 seconds before the half and up 28-0, Lawrence threw twice into the end zone before B.T. Potter missed a 24-yard field goal try. Potter got an earful from an emphatic Swinney after the miss.

Maybe it was the build up to two weeks of frustration for Swinney. He was asked about Lawrence's health and reports of a sore arm and about Etienne's fumble-itis (Etienne had a key mistake that kept North Carolina in that game).

But Lawrence said he was healthy and felt strong.

"Good to see us look like a very confident team today," Swinney said.

Lawrence completed 17 of 25 passes for 170 yards, including 10- and 8-yard TD throws to Ross. Lawrence also ran for a touchdown, the 6-foot-6 sophomore extending full body to get over the goal line.

"We all were challenged over the last two weeks to get back to being who we are," Clemson co-offensive coordinator Tony Elliott said.

Florida State never had a chance — again. For the second straight season the Seminoles were blown out in what not long ago was the marquee rivalry in the ACC.

The Seminoles broke the shutout with Blackman's 64-yard TD pass to Tamorrion Terry late in the third quarter.

"I told the guys this week we had to play at our best, but we didn't," Florida State coach Willie Taggart said. "Really disappointed."

Clemson won its 750th game, the 15th program nationally to do that and the first in the ACC.

Florida State: The Seminoles hoped to carry momentum from two straight wins into Death Valley. Nope. The 'Noles don't have the experienced depth to challenge the four-time defending ACC champions. At least it was better than last year, when the Tigers won 59-10 in Tallahassee.

Clemson: Don't expect the "What's wrong?" questions to continue as the Tigers showed power and motivation to keep on top. Lawrence appeared healthy and confident in dismantling Florida State.

Clemson should have no problem remaining No. 2 as it continues trying for a fifth consecutive College Football Playoff appearance.

Clemson receiver Tee Higgins came out in street clothes after halftime. But receivers coach Jeff Scott said it was nothing serious, just the team resting him with a big lead. Higgins had a tight hamstring, Scott said. He expected Higgins to be ready for next week.

Florida State heads to No. 19 Wake Forest next Saturday night.

Clemson goes on the road to take on Louisville on Saturday.