No. 6 Alabama adds another SEC title, edges LSU at tourney 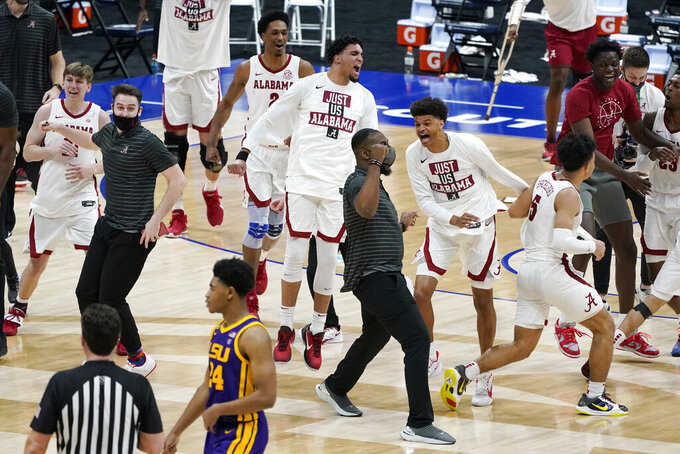 Just call them a Championship School.

Herbert Jones drove for a go-ahead layup with 19.5 seconds and No. 6 Alabama won the Southeastern Conference Tournament for the first time since 1991, holding off a late flurry to edge LSU 80-79 Sunday.

Coach Nate Oats and the Crimson Tide added to their regular-season title with a victory that helped Alabama match its highest seed ever in the NCAA Tournament. The Tide, which was No. 2 in both 1987 and 2002, is seeded second and will play Iona on Saturday.

Alabama, the reigning national champions in football, won its seventh tournament title overall, second in the SEC only to Kentucky's 31. The Crimson Tide (24-6) hadn't even reached this game since 2002.

Now they've joined Florida (2006-07) as the only SEC schools with both the league football and basketball titles in the same year. Alabama did it by adding two more SEC titles in basketball after Nick Saban's squad won both the SEC and national championships a couple months ago.

Oats noted Alabama football set the new name Saturday, referring to the Tide on Twitter as a “ CHAMPIONSHIP SCHOOL.”

The basketball team now has its sights set on another title.

“I have full faith that we can take this thing, take the NCAA tournament by storm and win the whole thing," Alabama guard and tournament MVP Jahvon Quinerly said.

Alabama still needed its defense after Jones went a long way down the lane for his shot.

Keon Ellis blocked a shot by LSU's Javonte Smart and the Tigers took a timeout with just over seven seconds left to set up the final attempt.

After the inbounds pass went astray and nearly to midcourt, Trendon Watford's 3 was well short of the rim. Aundre Hyatt's putback hit the back of the rim and bounced out and LSU couldn't get another good shot off in the scramble before the buzzer.

That set off yet another Alabama celebration — this time on the basketball court.

“I just know we had to stop them from scoring that last seven seconds, no matter what we had to do, who did it, somebody just had to get them stop,” Alabama senior guard John Petty Jr. said. "And we did. And we champs.”

Hyatt, meanwhile, was on the floor with his head in his hands. Watford was on his knees and slammed the court with a hand. Smart said he thought Hyatt's shot went in, calling it “crazy” it rimmed out.

“This is a hard one to take, losing by one with that many opportunities to win the game,” Smart said. “We gave it all we got. We really wanted this win.”

Jaden Shackelford led Alabama with 21 points, and Ellis and Quinerly each had 14.

LSU (18-9) hadn't won this tournament since 1980, and this was the Tigers' first time in the final since 1993. LSU coach Will Wade said the final sequence wound up starting too far out but liked that they had the shot from 3 and two more up close.

“We just missed, a little bit short there at the end,” Wade said.

Watford finished with a career-high 30 points for LSU. Smart added 21 and Cameron Thomas had 18.

About 20 minutes before tip-off, Alabama and LSU players had to be separated at midcourt. That was just a preview of the taut battle to follow.

Neither team led by more than four in the second half. Alabama was up 56-52 on a free throw by Jones. Smart hit back-to-back 3s with Thomas scoring on a layup, giving LSU a 60-56 lead midway through the half.

Shackelford answered with his own back-to-back 3s before Gary's layup made it 64-60 with 8:20 left.

Shackelford hit his fifth 3 with 6:54 to go giving Alabama its biggest lead since the opening minutes at 69-63. But LSU, especially Watford or Smart, kept answering to set up the thrilling finish.

LSU: This was the Tigers' third loss this season to Alabama, but easily the tightest. The Tigers took very good care of the ball with only five turnovers that Alabama turned into six points. But the second-highest scoring team in the SEC couldn't make the shot at the end to win.

LSU, ready to make to make consecutive NCAA Tournament appearances for the first time since 2005 and 2006, planned to stay in Nashville and travel Monday to Indiana.

Alabama will make the 21st NCAA Tournament appearance in program history. The Tide planned to travel to Indiana after the bracket announcement.