No. 7 Trojans head north to face the determined Beavers 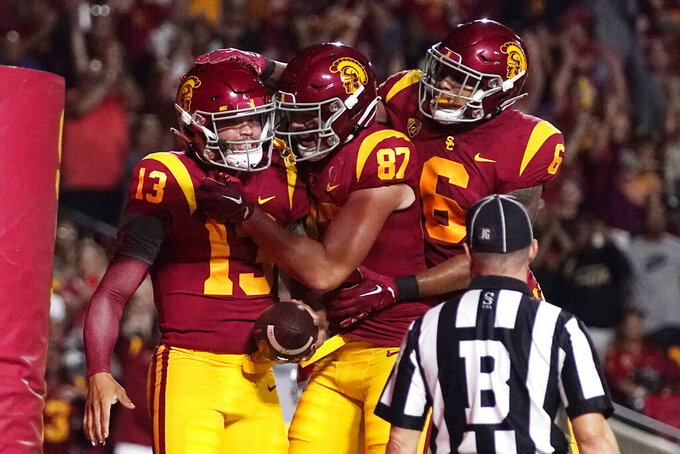 Line: USC by 5 1/2, according to FanDuel Sportsbook.

Under new coach Lincoln Riley, No. 7 USC is quickly putting last season behind them. One more win and they'll match their total from 2021. The Trojans have scored 40 or more points in each of their first three games this season. Oregon State has started the season at 3-0 for the first time since 2014. The Beavers haven't started a season 4-0 since 2012.

USC quarterback Caleb Williams has thrown for eight touchdowns and is averaging 291.3 yards passing per game. Oregon State has six interceptions so far this season, tied for eighth-best nationally. In the opener against Boise State, the Beavers' defense had five total takeaways. Jaydon Grant forced a fumble, had an interception, broke up two passes and recorded four tackles against the Broncos.

USC: WR Jordan Addison, the 2021 Biletnikoff winner who transferred from Pitt, leads the Trojans — and shares the Pac-12 lead — with five touchdown catches this season. A dynamic receiver, he has 18 receptions for 295 yards.

Oregon State: WR Anthony Gould had a breakout game against Montana State, catching a pair of touchdown passes and returning a punt 80 yards for another score. He is the first player in the nation this season to catch a TD pass and return a punt for a score, and the first Beaver to accomplish the feat since 2008.

Oregon State tight end Luke Musgrave, who had 169 receiving yards through the first two games, is expected to miss his second straight game with an unspecified injury. ... The Beavers have won seven straight games at Reser Stadium. ... Oregon State won its first game against USC in Los Angeles in more than 60 years last season, a 45-27 victory. ... The Trojans have scored 152 points through the first three games this season, most since 2005. ... USC's offense averages 50.7 points a game, Oregon State's averages 45.7. ... Oregon State has allowed just two sacks this season.