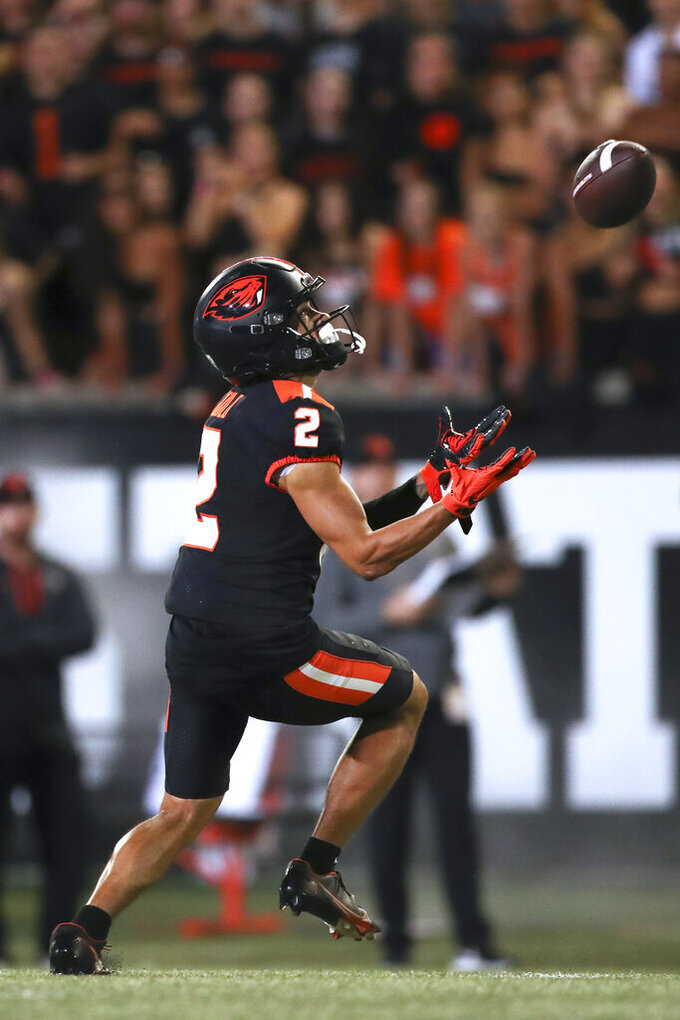 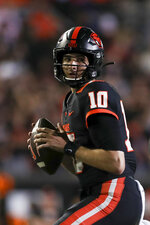 The Beavers, who are hoping to build on last season’s first bowl-game appearance since 2013, took control early behind their opportunistic defense and a few big plays offensively.

“I mean, getting that first one at home, I think that just kind of puts the season into motion,” said Nolan, who completed 14 of 23 passes for 251 yards and two touchdowns with two interceptions.

Boise State received a lift off the bench from backup quarterback Taylen Green, who replaced an ineffective Hank Bachmeier and sparked a second-half comeback.

Bachmeier, a fourth-year starter, was pulled in the second quarter and did not return after tossing two interceptions and losing a fumble.

Green showed promise, especially as a runner with 102 yards on the ground. His 74-yard touchdown gallop late in the third quarter cut Oregon State’s lead to 27-10. He also scored on a 4-yard keeper early in the fourth quarter that brought Boise State within 27-17.

Green completed 19 of 28 for 155 yards with one interception.

“We had to make an adjustment,” Boise State coach Andy Avalos said of replacing Bachmeier. “To be able to put Taylen in there and get his opportunity to run the offense, he gave us a spark and got us going.”

With the Beavers’ offense in neutral, short-yardage specialist Jack Colletto broke loose up the middle on a third-and-2 play for a 41-yard touchdown with 10:39 remaining to provide the final margin of victory.

“Defensively, really pleased with the effort, physicality on both sides of the ball, and tackling and running and playing with energy,” Oregon State coach Jonathan Smith said.

After a three-and-out by Boise State, Nolan hit Tyjon Lindsey for a 47-yard touchdown, giving Oregon State a 14-0 lead at 1:15 of the first quarter.

Early in the second quarter, Riley Sharp’s sack of Bachmeier forced a fumble that Colletto recovered at the Broncos’ 6-yard line. Boise State’s defense held and Everett Hayes kicked a 23-yard field goal to increase the lead to 17-0.

The Broncos whiffed on their best scoring opportunity in the first half when Ashton Jeanty lost a fumble at the Beavers’ 2-yard line.

A 74-yard catch-and-run by Anthony Gould set up Deshaun Fenwick’s 12-yard touchdown to increase the Beavers’ lead to 24-0 at the break.

Nolan was intercepted early in the third quarter on a sideline pass that he appeared to try and throw out of bounds. Despite taking over on the Beavers’ 25-yard line, Boise State settled for a 41-yard field goal by Jonah Dalmas to get on the scoreboard.

Oregon State safety Jaydon Grant, who had a forced fumble and interception, said turnovers was the difference.

“I think that any time you take the ball away it’s huge,” Grant said.

Boise State: Is it time for the Taylen Green era at quarterback? Backmeier struggled mightily. Green is a work in progress as a passer, but he gives the Broncos another dimension with his running ability and speed. Will Backmeier bounce back or could there be a quarterback controversy brewing?

Oregon State: The Beavers’ defense was superb in the first half, forcing four turnovers that were instrumental in building a big lead. Nolan, a returning starter at quarterback, displayed his big-play capability in the passing game, but he also was intercepted twice. Avoiding turnovers will be a priority for Nolan moving forward.

Boise State: The Broncos will play at New Mexico on Saturday.

Oregon State: The Beavers will play at Fresno State on Saturday.