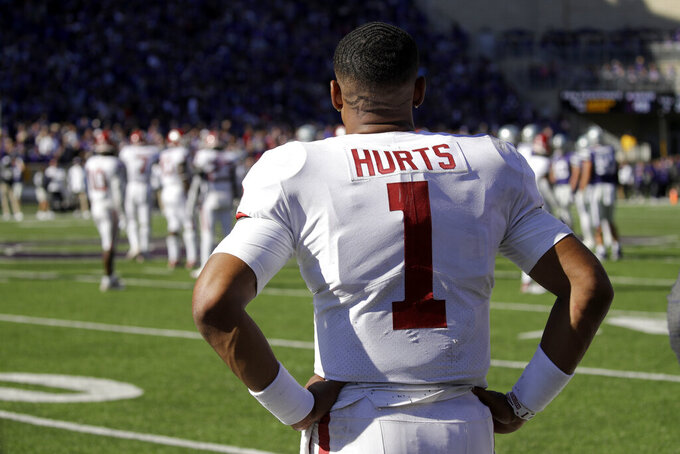 In August, Oklahoma, Texas and Iowa State were the talk of the Big 12 Conference.

The Sooners, Longhorns and Cyclones all head into November looking to use bye weeks to bounce back from crushing defeats.

All three of the preseason darlings, let down last weekend by their leaky defenses, will have some time off to recuperate before the Sooners host the Cyclones (5-3, 3-2) on Nov. 9 and Texas gets K-State in Austin.

"Our team knows what it's capable of, so there's a lot of belief and confidence in the room," Oklahoma coach Lincoln Riley said. "But also a harsh sense of reality that, we've got to go play that way, too."

The Sooners can take solace in knowing that they've gone on to make the playoff in each of the past two seasons despite their defense putting up a midseason stinker.

Oklahoma lost to Iowa State 38-31 as an enormous favorite in 2017, and it survived last year even though it let up 48 in a loss to Texas.

The Sooners will have to be perfect yet again to entertain the notion of representing the Big 12 in the final four. Oklahoma allowed Kansas State to keep the ball for more than 38 minutes, but still scored 18 points in the final 12:32 and nearly recovered an onside kick with just over a minute left.

"This one has more of, than any (loss) I can remember, of, 'if we make one more (play) on any side.' And we had so many golden opportunities to do it," Riley said. "You've got to learn from it, and it's got to be something that galvanizes the team."

Texas was supposed to be back after beating Georgia in last year's Sugar Bowl. The Longhorns, however, have a terrible defense, surrendering 85 points in its last two games.

TCU freshman Max Duggan had a breakout game Saturday, throwing for 273 yards and two touchdowns and rushing for 72 yards and a score. TCU also held Texas to just 10 second-half points and forced Sam Ehlinger into arguably his worst game as a Longhorn. Ehlinger was just 22 of 48 passing with a career-high four interceptions.

"That's the best defense in our conference for a reason," Texas coach Tom Herman said. "We did not play to the level that we expected on that side of the ball."

Iowa State also has work to do.

The Cyclones, who hadn't allowed more than 24 points in regulation all season, gave up three touchdowns of 50 yards or longer in the first half alone against Oklahoma State. Iowa State then mounted a comeback to tie it up at 27-all before Brock Purdy threw what proved to be a game-losing pick-six to Malcolm Rodriguez.

Purdy, like Ehlinger, had an afternoon to forget. He threw a career-high three interceptions, all in the fourth quarter.

Iowa State will still have a chance to challenge for a spot in the Big 12 title game because it gets Texas at home the week after travelling to Norman.

"We know exactly what wins, and we know exactly what loses," Iowa State coach Matt Campbell said. "For us, it's just the ability to pound away at the fundamentals and the details and making sure that, as we get into some of these big games down the stretch run, that we've got the ability to really hang on the fundamentals and details of what allows us to win."