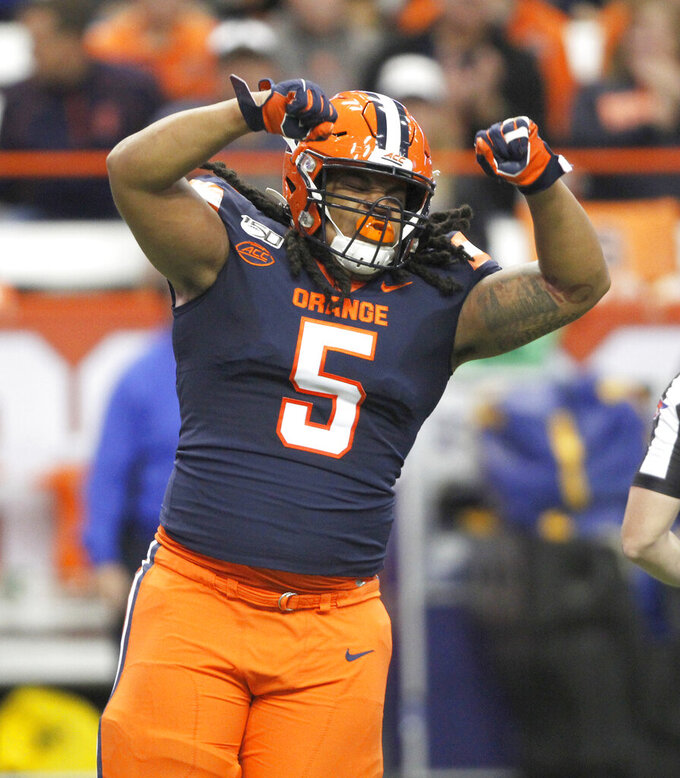 SYRACUSE, N.Y. (AP) — When the Pitt Panthers went into halftime against Syracuse with an 18-point lead, quarterback Kenny Pickett didn't like what he saw and let his teammates know it.

"Too many smiles," Pickett said, recounting his impassioned halftime speech. "I play this game real seriously. The game was far from over, so when I came in I saw guys smiling and I didn't like it. I just wanted to make sure we came back down to earth and got the job done."

The Panthers scored just three points in the second half, but that proved just enough behind a defense that registered nine sacks in a 27-20 victory over the Orange on Friday night, Pitt's fourth straight close triumph.

The Panthers entered the game ranked second in the nation in sacks with an average of 4.50 per game and now lead the nation with 36. The sack total was the most in a game for Pitt since 2001, and 10 players had a hand in them.

Pickett threw for 232 yards and two touchdowns, one of them coming on a trick play to put Pittsburgh ahead for good. He finished 18 of 33 with zero turnovers.

Pittsburgh (5-2, 2-1 Atlantic Coast Conference) had won its previous three, by a combined seven points, and two of those victories came in the final minute. This one was different until the end, with the Panthers gaining a 24-6 halftime lead and keeping the Orange at bay despite a tense final 2 minutes.

Clayton Welch hit Aaron Hackett for a 7-yard touchdown with 2:44 left to move the Orange within striking distance, and the Panthers averted a meltdown after Vincent Davis lost a fumble but was ruled down with under 2 minutes left near the Pitt 35.

"Great team win. Our kids find a way to win," Pitt coach Pat Narduzzi said. "We don't do it the easy way. Nine sacks. This is what we've done all year. Our kids have been relentless. And we missed some, too."

Syracuse (3-4, 0-3), which had lost only once in its previous nine games in the Carrier Dome, is the only team in the ACC's Atlantic Division without a conference win and now has lost two straight.

"Obviously, disappointing," Syracuse coach Dino Babers said. "You don't take any pleasure in losing. I appreciate the effort. We need to regroup. Right now, everybody's job is in jeopardy. It's not fair to keep playing the same guys if the results don't change."

Pickett hit a wide-open Aaron Mathews for a 43-yard score after a pair of laterals to give Pitt a 10-3 lead late in the first quarter. A.J. Davis, who finished with 103 rushing, scored on a 5-yard run with 4:53 left before halftime, and Pickett hit Maurice Ffrench for a 14-yard score with 23 seconds left in the second quarter.

Syracuse finally broke through early in the third after quarterback Tommy DeVito was hit hard and forced to leave the game in favor of Welch, a junior college transfer. Welch, who had broken two nice runs when inserted briefly in the first half, found Taj Harris down the left side on a third-and-9 play and Harris outraced the defense for a 94-yard score.

"The outcome didn't come out like we wanted," Welch said. "We never gave up."

Pittsburgh stunned UCF 35-34 a month ago on the final play of the game with a play offensive coordinator Mark Whipple dubbed the "Pitt Special." Davis took a direct snap from center, ran to his left and flipped the ball to Mathews, who was headed right. Matthews, a former high school quarterback, then elected not to run, pulled up as he rolled right and found Pickett in the end zone. Against the Orange, Pickett did the throwing and Mathews the catching, though he did juggle it briefly.

"We felt it was the right time," Narduzzi said. "A great play by the entire offense. Great execution."

Syracuse has now allowed 35 sacks on the season, the most in the Bowl Subdivision. Ten Pittsburgh players were in on the nine sacks as they spread the pressure around.

Syracuse extended its streak of consecutive games with at least one takeaway to 21, second longest in the nation. Jawhar Jordan recovered Ffrench's fumble on a booming punt by Syracuse's Sterling Hofrichter in the first half. The Orange have 46 turnovers in that span, 21 of them fumble recoveries.

Pittsburgh: The Panthers have a swarming defense and an efficient offense with some gifted receivers like Ffrench (6 catches for 92 yards) and a solid quarterback in Pickett. That should make Pitt a threat going forward as they try to repeat as Coastal Division champions.

Syracuse: The Orange's uptempo attack that's Babers' calling card is misfiring way too often and needs a quick fix before the season slips away. Welch finished 8 of 20 for 176 yards and two touchdowns. DeVito was 11 of 23 for 101 yards passing. Take away the long pass play and Syracuse managed 234 yards on 77 plays.

Pittsburgh hosts Miami in a homecoming game on Oct. 26.