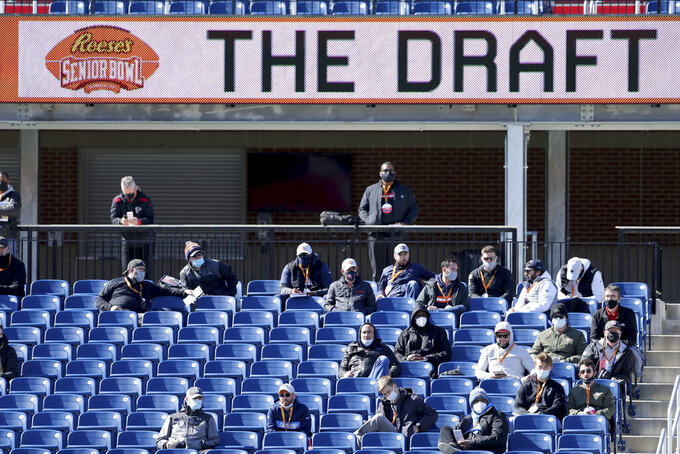 Former Wake Forest quarterback Jamie Newman hasn’t played in a game in about 400 days since first switching schools and then opting out of the 2020 season.

Newman is hardly alone among the players trying to shake off the rust after long layoffs leading up to Saturday's Senior Bowl for senior NFL prospects.

A number of the Senior Bowl players had shortened seasons or none at all because of the coronavirus pandemic. Some chose to opt out of the season and start preparing for the draft — including Newman, Michigan wide receiver Nico Collins and Washington defensive tackle Levi Onwuzurike.

Others had their seasons postponed to spring or their teams played few games, if any.

The lack of 2020 game film makes this week, and Saturday's game, more important than usual.

“If there ever was a year when playing in the game was important, it would be this year to see how you play with the bullets flying,” said Carolina Panthers and American team head coach Matt Rhule. “What do you do?”

It will be Newman's first live game action since the Pinstripe Bowl against Michigan State on Dec. 27, 2019. He passed for 2,868 yards and 26 touchdowns against 11 interceptions that season.

Then Newman captured considerable headlines by transferring to Southeastern Conference power Georgia, where he was expected to start before choosing to opt out of the season.

“There was definitely some rust,” Newman said.

He said his family's input was the biggest factor in his decision to opt out despite some criticism from Georiga fans on social media.

“No regrets of not playing this season,” Newman said. “Still love DawgNation regardless of all the stuff that I get via Instagram. Still got love to that family. Still got love for the fans.”

“I think he’s shown that he can play with some of the best people in the country,” said Texas A&M quarterback Kellen Mond. "I feel like he’s been super efficient both in the run and the pass game.

“Being able to handle both the run and the pass game, I think that was definitely something that a lot of people were coming out here to see with so much time off. But I think he’s done a really good job.”

There are number of players at the Senior Bowl returning after a long absences from the field.

Sage Surratt, a former Wake Forest teammate of Newman, also opted out of the season after racking up 1,001 receiving yards in nine games in 2019.

Collins also sat out after having 37 catches for 729 yards and seven touchdowns in 2019. Collins faced questions about his rationale from some NFL teams.

“I came back for my senior year and they ended up canceling the season (opener) against Purdue and nobody could tell me or knew the next time we would play, and I felt like I was in No Man’s Land,” Collins explained. “So I sat down with my family and had to make a business decision.”

Florida State safety Hamsah Nasirildeen only played in two games after attempting to return from a knee injury sustained in November 2019.

A number of small-school prospects had their seasons moved to the spring, not optimal for players preparing for the draft.

Arizona State wide receiver Frank Darby was expecting to finally be the go-to receiver but only recorded stats (six catches) in two games, missing one game with an injury and the finale because of a family issue. The Sun Devils have had receivers — N'Keal Harry and Brandon Aiyuk — drafted in each of the past two first rounds.

Darby trained in Las Vegas for the Senior Bowl and the now-canceled combine.

“A lot of things are clicking back,” said Darby, who averaged 19.9 yards per reception with eight touchdown catches in 2019. “It’s kind of like riding a bicycle. You haven’t ridden in a long time but once you get on it, you might fall a little bit to start off, but after you get going you get going.”

Rhule believes it was a smart decision for these players to participate in the Senior Bowl, no matter how rusty they might have been. He still wants to hear the reasons behind any decisions to opt out.

“I think opting out is just like transferring to me,” Rhule said. “It’s just like any other personal decision. I just always want to understand why. COVID has affected everyone so differently that I’m not here to judge anyone on their reaction to it. But it’s always big decisions.”