RB Who at RB U? Pitt's Davis, Sibley hope to keep tradition 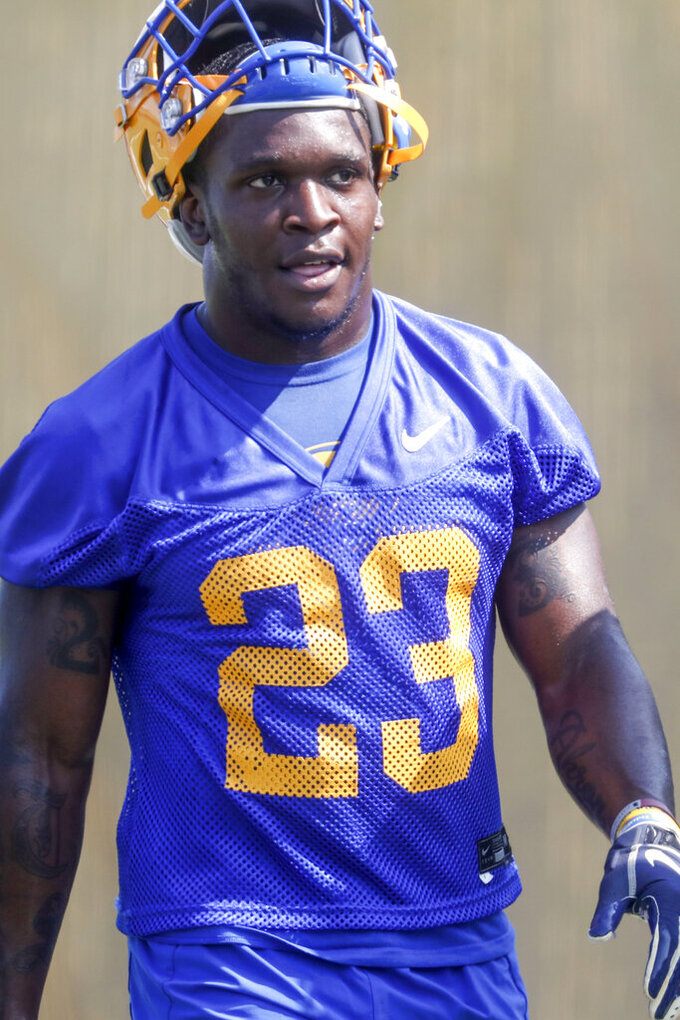 In this photo from Aug. 2, 2019, Pittsburgh running back Todd Sibley Jr. takes a beak during an NCAA football practice in Pittsburgh. Sibley and A.J. Davis are well aware of the running back lineage at Pitt. All they have to do in their first year is find a way to replace Qadree Ollison and Darrin Hall, who each topped 1,000 yards last year for the Panthers. (AP Photo/Keith Srakocic) 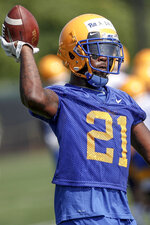 If Powell is being honest, he is not quite sure what to make of A.J. Davis and Todd Sibley Jr., the two players who will be given the first crack at replacing Qadree Ollison and Darrin Hall, good friends who each topped 1,000 yards last season for the ACC Coastal Division champions on their way to the NFL.

Sure, Powell likes Davis' elusiveness and vision. He appreciates the way the 5-foot-9, 220-pound Sibley seeks out contact. Powell just hasn't seen either of them do it when it matters. Davis has 52 touches in two seasons. Sibley has one. So pardon Powell if he doesn't want to serve as their hype man. He loves the potential. He's just been around long enough to know that potential and production don't always line up.

"They're good practice players, but live bullets, they haven't had," Powell said. "That's where you make your money, with live bullets. So they can block bags and they can cut off cones. They can make me miss at practice but it's yet to be seen if they can do it in a game consistently."

Davis and Sibley understand they have massive shoes to fill. It simply comes with the territory when you play running back at Pitt, where the lineage at the position stretches from Hall and Ollison to current NFL stars James Conner and LeSean McCoy to Hall of Famers Curtis Martin and Tony Dorsett.

"That keeps the standard high," Davis said. "You want to go hard, try to beat their records, try to be better than them. It's a legacy. You've always got to keep that tradition and keep it going."

They certainly won't lack for opportunities. While new offensive coordinator Mark Whipple is tasked with helping improve a passing attack that ranked 120th in the country last season, head coach Pat Narduzzi remains committed to the blue-collar approach that has long been the program's trademark.

Narduzzi — who never saw a depth chart he didn't like to tinker with — isn't sure there's a definitive pecking order. Maybe there doesn't need to be one. There wasn't in 2018, when Hall and Ollison took turns as the feature back depending on the week and the opponent, with converted defensive back V'Lique Carter providing a dash of speed when necessary.

For all they did on the field, however, Hall and Ollison's biggest impact might have come off it. They checked their egos at the door, never complaining when the workload would shift from one game to the next. Both understood they needed to be successful if the Panthers wanted to be competitive. Sibley watched intently, soaking up what he could.

There's a chance Sibley and Davis develop the same rapport. The two met at national showcase for high school players in January 2017. Sibley, who had already committed to Pitt at the time, immediately recognized Davis' talent and began selling Davis on the prospect of joining him with the Panthers.

"I figured that competition would only help me," Sibley said. "We want the best guys here. So I was pitching him, 'Come on and play with me, you never know what can happen when we get there.'"

They still don't know. The next four months will provide an opportunity to find out. Their development remains very much a work in progress. At 6 feet and 215 pounds, Davis is dangerous in space. The problem, of course, is that space can be hard to come by.

"Sometimes he wants to make too many cuts," Powell said. "He's going to work on his power when there's nowhere to go. If we get them all blocked up, he'll be really good but ... that doesn't happen a lot. More often than not there's going to be someone around the line of scrimmage we're going to have to get on an edge, make them miss, get them tilted and get going the other way."

Sibley, by contrast, is more akin to the burly Ollison.

"I know in my heart I can do those same things," Sibley said. "I like to think I'm a violent player. I'm a big guy, but I'm fast. I can be physical. I feel like this game was made for me and I feel like I can be the next great running back."

Those are the expectations when you play at a place that embraces the moniker "RB U." Sibley and Davis have spent the last two years screaming "RB U" at practice. The chance to be the next link in a chain that stretches back multiple generations awaits.

"You're like: 'Wow, I'm playing running back at the University of Pittsburgh. I'm doing something that some of the greats have done,'" Sibley said. "You're proud to wear that jersey and it only motivates you to want to be the next great running back here, to add to the tradition."