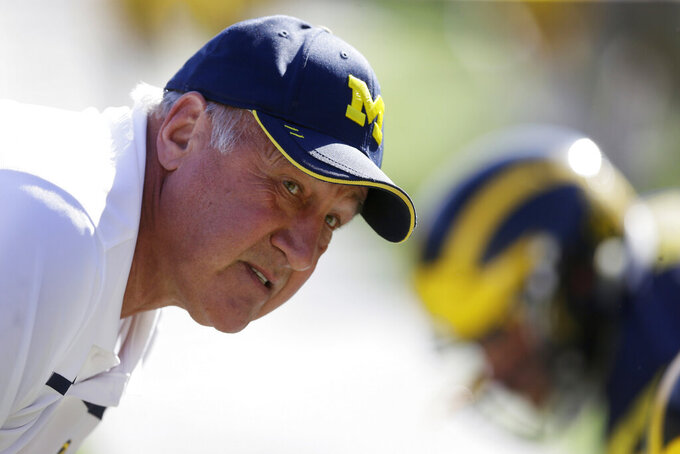 FILE - In this Oct. 10, 2015, file photo, then-Michigan defensive coordinator Greg Mattison watches drills before the first half of an NCAA college football game against Northwestern in Ann Arbor, Mich. New Ohio State coach Ryan Day, who replaced the retiring Urban Meyer, fired Greg Schiano and brought in Greg Mattison as his defensive coordinator. A former NFL coordinator, Mattison lately was the defensive line coach at Michigan, which was among the nation’s defensive leaders.(AP Photo/Carlos Osorio, File)

But the weaknesses that led to the 49-20 blowout by the Boilermakers on Oct. 21 were on display most of the season, masked by a high-scoring Buckeyes offense.

Many players from that much-maligned 2018 Ohio State defense are back. But with a new head coach, defensive coordinator, scheme, position coaches and a new resolve, they're determined things will change.

"I'd say the attitude right now is redemption," cornerback Jeffrey Okudah said on the first day of practice last week.

The Purdue game was ugly for Ohio State. D.J. Knox ran for 128 yards and quarterback David Blough torched the No. 2 Buckeyes for 378 yards and three touchdowns.

The Buckeyes went on to win a Big Ten title, but the debacle at West Lafayette, Indiana, kept them outside looking in when teams were selected for the College Football Playoff.

The Ohio State defense finished No. 9 statistically out the 14 teams in the Big Ten. The unit surrendered more than 400 yards per game, settling in at 93rd in the nation in that category, 105th in passing defense and 76th against the run.

Not up to standard at Ohio State, which has sent a dozen defensive players to the NFL in the last three seasons.

"We definitely don't dwell on last season," said defensive end Chase Young , who likely will be in an NFL training camp this time next year. "We had a coaching change, so we put last year in the past and we're just facing forward, and we're just trying to move the train."

New coach Ryan Day, who replaced the retiring Urban Meyer, fired Greg Schiano and brought in Greg Mattison as his defensive coordinator. A former NFL coordinator, Mattison lately was the defensive line coach at Michigan, which was among the nation's defensive leaders. Day also poached linebacker coach Al Washington from the rival Wolverines.

The biggest change is the installation a hybrid linebacker-safety position known as the "bullet." Brendon White, a 6-foot-2, 215-pound safety who was outstanding in the last five games of 2018, is a leading candidate to fit into that spot.

The scheme will be simplified for linebackers, who struggled as a unit last year. They won't be expected to make as many reads, freeing them up react and play faster.

The three starting linebackers return. Tuf Borland, who had battled an injury, is healthy and starts in the middle. He'll be flanked by Malik Harrison and Pete Werner. Harrison, a senior, played well down the stretch last season and could be poised for a big season.

"They're a hungry group now," Day said. "They've read things. They're ready to go, and they're hungry, which is fun to be around. There are not a lot of smiles on our faces right now, which you like as a coach."

All the defensive players heard the criticism last year.

"I got a (Twitter message) one time that said I need to go back to high school and pick a different sport," laughed cornerback Damon Arnette . "I was like, damn!"

A fifth-year senior, Arnette has struggled at times on and off the field. He had considered trying to make a fresh start in the NFL but was talked out of entering the draft. He'll be in the main cornerback rotation with Okudah and Shaun Wade.

"I think this year, hit the reset button for real," he said. "Especially with me, it's my last year so it's all or nothing. The question is, are we going to play up to what the talent level is and not let distractions come between (us and) what we know we can do on the field."