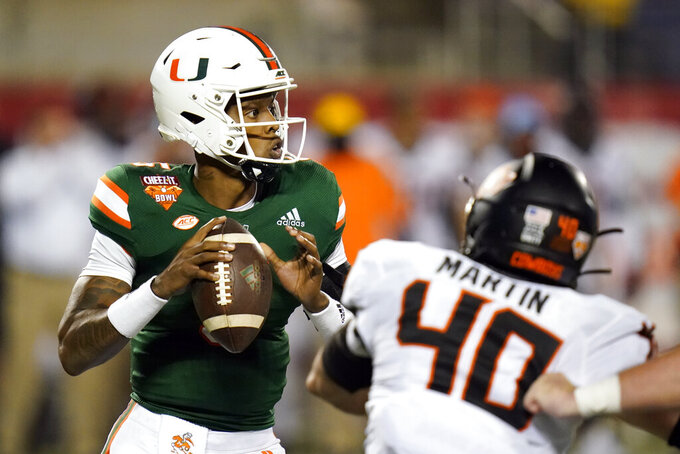 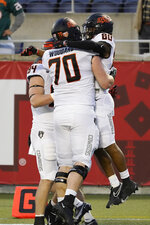 ORLANDO, Fla. (AP) — Oklahoma State went to the air early and often to finish its season on a high note.

Spencer Sanders threw for 305 yards and four touchdowns, and the Cowboys held off No. 18 Miami for a 37-34 victory in the Cheez-It Bowl on Tuesday.

Oklahoma State (8-3) called 15 consecutive pass plays to open the game and stormed out to a 21-0 lead. Sanders threw TD passes of 30 and 32 yards to Brennan Presley, and LD Brown had a 2-yard touchdown run.

“Our game plan going in was to try to offset some of the speed and strength they have in the front six,” Oklahoma State coach Mike Gundy said. “They are a fast, athletic team. We wanted to throw the ball 25 times in the first half.”

Sanders also led the Cowboys with 45 yards rushing and was named Most Valuable Player.

“That MVP doesn’t just go to me,” Sanders said. “The defense stopped them when they needed to stop them. We scored when we needed to score. I told them that this MVP is for everyone.”

Presley caught a third touchdown pass in the fourth quarter to put Oklahoma State up 37-26. He finished with six receptions for 118 yards. Tay Martin had six catches for 73 yards, and Dillon Stoner also caught a touchdown pass.

“We have a bunch of weapons,” Sanders said. “We have guys you haven’t even seen yet and guys that didn’t get many touches. Putting Brennan with that group makes it that much better.”

Miami (8-3) got on the board in the second quarter when D’Eriq King threw a 10-yard touchdown pass to Brevin Jordan. But King left with a right knee injury with 4:06 remaining in the first half. Hurricanes coach Manny Diaz said he will be evaluated Wednesday.

King, who transferred to Miami from Houston before the season, announced last week that he would be returning to Miami and for a sixth season of college football.

“It’s harsh ... a year that’s had so much adversity, for a guy that’s done everything right,” Diaz said. “Hopefully we’ll get good news tomorrow.”

The Hurricanes rallied behind backup quarterback N’Kosi Perry, who threw for 228 yards and two touchdowns. Cam’Ron Harris’ 42-yard touchdown run made it 21-19 in the third quarter, but Jordan came up short on the 2-point conversion.

“The guys rallied around N’Kosi and did a great job,” Diaz said. “He looked like a guy that played a lot of ball and the team had confidence that they could move the ball with him.”

Perry’s 5-yard TD pass to Michael Harley helped the Hurricanes close to 37-34 with 5:39 left. But he misfired on six of his final nine passes, and his 6-yard pass to Michael Redding III was not enough to convert a fourth-and-9 with under two minutes remaining.

Oklahoma State wide receiver Tylan Wallace had six catches for 45 yards in just one half of action. That was the tentative plan, according to Gundy.

“We just talked with him and at some point we wanted to get some players in the game that were going to be here next year and we wanted to protect him,” Gundy said. "I’m not going to say that what happened with Miami’s quarterback didn’t have a little bit of effect on that.”

Oklahoma State was unranked coming into the game, but likely will make the final Top 25 of the season.

Miami, ranked No. 18, could be out of the final rankings after consecutive losses.

Oklahoma State has won four of its past five bowl games. ... Miami has lost five consecutive bowl games and 11 of its past 12. ... Jordan had eight catches for 96 yards and two touchdowns. ... Miami defensive back Te’Cory Couch had 9 1/2 tackles, but was flagged for pass interference three times in the third quarter.

Oklahoma State should have a dynamic offense with Spencer returning at quarterback when it opens next season against Missouri State.

Miami has to hope King’s injury isn’t serious enough to keep him out of spring practice because the Hurricanes open next season against Alabama in Atlanta.