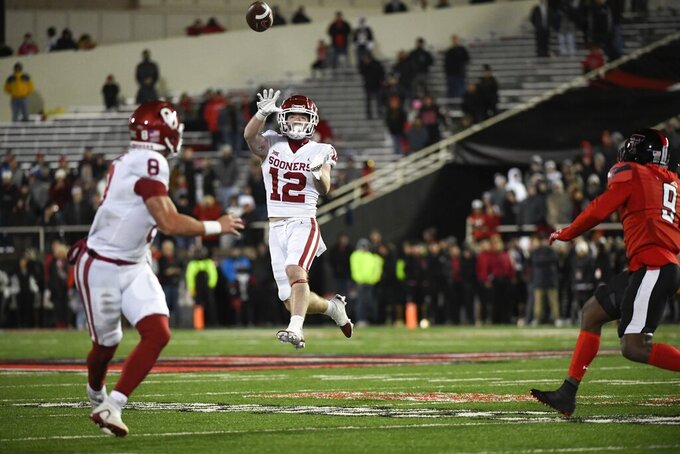 TCU quarterback and Heisman Trophy finalist Max Duggan is The Associated Press Big 12 offensive player of the year in a unanimous vote, as was the selection of Sonny Dykes for coach of the year after his first season with the Horned Frogs.

Kansas State defensive end Felix Anudike-Uzomah was chosen as the top defensive player, and Oklahoma quarterback Dillon Gabriel, a transfer from UCF, was the newcomer of the year.

Nine TCU players — six on offense, three on defense — were first-team picks after the Frogs were the first Big 12 team since Texas in 2009 to finish the regular season 12-0. They made the four-team playoff, with a spot in the Fiesta Bowl against Michigan, even after losing in overtime to Kansas State in the league championship game.

The AP honors released Friday were determined by the vote of a panel of 18 sports writers and sportscasters who regularly cover the conference.

Duggan is one of the nation's most efficient passers, with 3,321 yards, 30 touchdowns and only four interceptions. He also has 404 yards rushing with six more TDs. He lost his starting job going into the season, but returned to that role after an injury to Chandler Morris in the opener and now has made 41 career starts.

The Big 12's top rusher and pass catcher were both unanimous choices while again being first-team picks. Texas running back Bijan Robinson has run for 131.7 yards per game with 18 TDs, and Iowa State receiver Xavier Hutchinson has 107 catches for 1,171 yards and six TDs.

Three offensive linemen were first-team selections for the second year in a row: Guards Cooper Beebe from Kansas State and Steve Avila from TCU, and Baylor tackle Connor Galvin.

On the defensive side, Anudike-Uzomah and tackles Dante Stills from West Virginia and Siaki Ika from Baylor all repeated as first-team picks, as did TCU cornerback Tre'Vius Hodges-Tomlinson. Anudike-Uzomah and Stills were unanimous selections.

The 2022 AP All-Big 12 team, as selected by a panel of 18 sports writers and sportscasters who regularly cover the league, with players listed alphabetically with name, school, height, weight, class and hometown. (“u-” denotes unanimous selection):