Tennessee senior kicker opts out of remainder of season 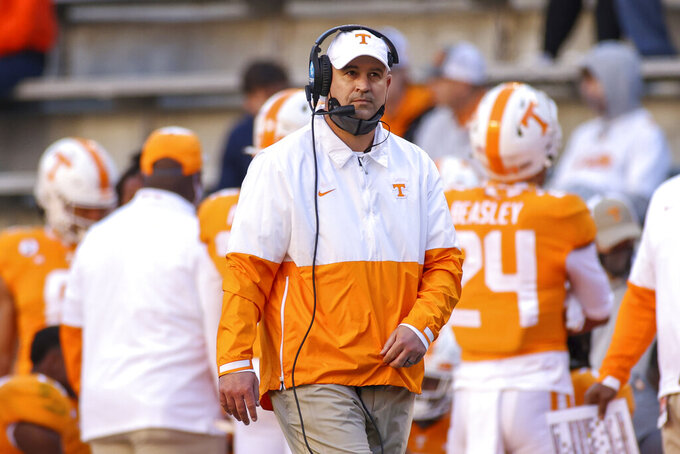 KNOXVILLE, Tenn. (AP) — Tennessee kicker Brent Cimaglia has opted out of the Volunteers' final two games of the season, citing injuries and a need to focus on his mental well-being.

Cimaglia said in a post on social media Monday that took him some time to come to that conclusion.

“However my focus is to work on my mental well-being and physical health,” Cimaglia wrote. “Due to many hardships and struggles within the program, it is in my best interest to take this additional time to rehabilitate ongoing injuries. I look forward to giving my best in the future.”

Cimaglia made 85.1% of his kicks last season. This season the senior is just 5-of-9 on field goals and missed an extra point in Saturday's 31-19 loss to No. 6 Florida, his first miss after 88 made extra points.

Tennessee coach Jeremy Pruitt said he talked with Cimaglia, who has played through “difficult circumstances” this season. Pruitt said Cimaglia also indicated he will come back next season with this season not counting against player eligibility.

“He feels like that it’s better for him not to participate the remainder of the season and put him in a better spot to get ready for next year,” Pruitt said.

Punter Paxton Brooks also will fill in at kicker when Tennessee (2-6) visits Vanderbilt (0-8) on Saturday and in the regular season finale against No. 5 Texas A&M on Dec. 19.

Pruitt said freshman quarterback Harrison Bailey, who got his first career start in the loss to Florida, and J.T. Shrout will get the majority of work in practice moving forward. Brian Maurer will play a role with his athleticism.

That means Tennessee is benching senior Jarrett Guarantano, who hadn't practiced since a loss to then-No. 23 Auburn on Nov. 21 with several Vols quarantined or in isolation. Guarantano dressed against Florida but didn't play for the first time since Nov. 11, 2017.

“We’re going to go with (Harrison) and J.T. and then kind of probably stay with the same schedule as we did this past week,” Pruitt said.