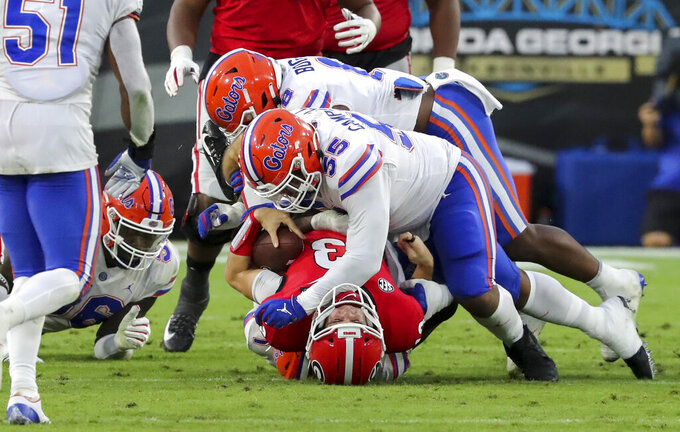 Georgia quarterback Stetson Bennett (13) is taken down at the line of scrimmage by Florida defensive lineman Kyree Campbell (55) during the first half of a NCAA college football, Saturday, Nov. 7, 2020, in Jacksonville, Fla. (Curtis Compton/Atlanta Journal-Constitution via AP) 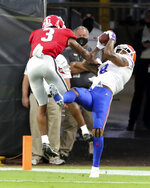 JACKSONVILLE, Fla. (AP) — Kyle Trask started jumping up and down on the sideline. His Florida teammates took it to another level, running and leaping into the stands.

Coach Dan Mullen wasn't going to be left out off the fun. Mullen pulled himself onto the edge of the front row and celebrated wildly with fans.

Mullen clearly understood the magnitude of the victory. Everyone did.

Trask had another four-touchdown night, becoming the first quarterback in Southeastern Conference history to accomplish the feat in five consecutive games, and the eighth-ranked Gators beat No. 5 and undermanned Georgia 44-28 on Saturday.

“You’ve got to enjoy it," Mullen said. "I might be 48 years old, but I’m really young on the inside so I’ve still got to enjoy some of that stuff.”

The Gators (4-1) ended a three-game losing streak in the rivalry known as the “World’s Largest Outdoor Cocktail Party” — it was Mullen’s most significant victory in three years in Gainesville — and now have a stranglehold on the SEC’s East Division.

The Bulldogs (4-2), who entered the game as 3½-point favorites, were likely eliminated from College Football Playoff consideration and probably have a quarterback competition moving forward.

Trask completed 30 of 43 passes for a career-high 474 yards — 8 yards shy of Tim Tebow's single-game school record — despite playing much of the night without standout tight end Kyle Pitts.

Pitts was knocked out of the game in the second quarter on Lewis Cine’s crushing hit over the middle. Cine was ejected for targeting, adding to Georgia’s already-thin defense.

“Kyle Trask does a great job," Mullen said. "He’s not going to force the ball. If they’re going bracket and take away and double people, he’s going to go to who you’re not doubling or covering.”

Once Trask and Florida got going, the Bulldogs did little to stop them. The Gators scored on seven of eight possessions after a three-and-out to open the game and finished with 571 yards — the most allowed in Georgia coach Kirby Smart's five seasons.

“We just can’t let this game define us," Dawgs receiver Kearis Jackson said. "We’re not in the situation we want to be in right now, but we still have games to be played. There are still plays out there to be made.”

The Bulldogs had several chances to make it a one-possession game late, but D’Wan Mathis kept overthrowing open receivers. Mathis, who started the season opener, replaced Stetson Bennett in the third quarter.

Bennett left the game briefly in the first quarter with a shoulder injury and was ineffective after returning. He completed 5 of 16 passes for 78 yards, with a touchdown and an interception.

Bennett was without his top target, George Pickens (upper body), and lost Marcus Rosemy-Jacksaint to an apparent broken right leg on a 32-yard touchdown catch in the first quarter.

Replays showed the severity of Rosemy-Jacksaint’s injury as team trainers rushed to the end zone and quickly got an air cast on his leg. He was carted into the tunnel amid a standing ovation. Florida safety Brad Stewart hit Rosemy-Jacksaint just before he crossed the goal line.

It looked like it would be a Georgia rout.

It ended up being Florida’s night to celebrate.

“I don’t make excuses," Smart said, pointing out his team is 19-2 in its last 21 East games. “I don’t look at it as cause for concern. ... I’m not going to say the sky’s falling or everything’s coming down. We’ve got to be better."

Georgia might have to move on from Bennett, a fourth-year junior who has completed 20 of 44 passes for 201 yards with one touchdown and five interceptions since the first half against Alabama. Mathis wasn't any better against Florida, but he's young and has potential. Southern California transfer JT Daniels or highly touted recruit Carson Beck also could get a shot.

Florida notched a signature win for Mullen, but likely can't afford a slip-up down the stretch to remain in play for a CFP spot.

Georgia likely will fall out of top 10 of T he Associated Press' college football poll for the first time this season. Florida surely will jump the Dawgs.

Florida hosts Arkansas next Saturday, the return of quarterback Feleipe Franks to the Swamp. Franks left the Gators at the end of last season, landed with the Razorbacks and has played well.

Georgia plays at Missouri, which has lost six straight in the series.