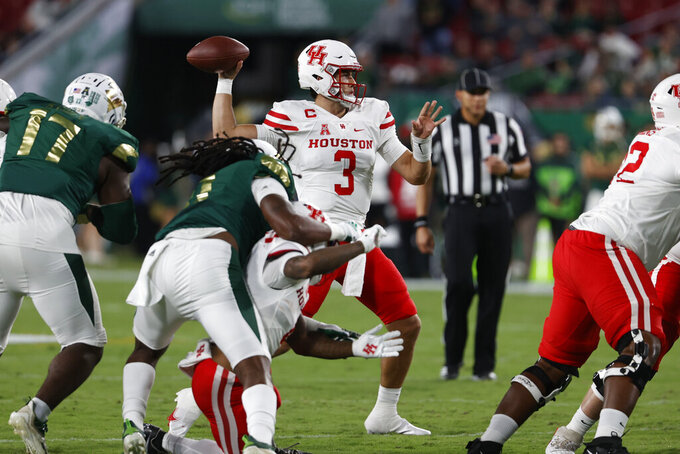 Henry had 130 yards on 10 carries, and Alton McCaskill picked up 125 yards on 22 attempts. Nathaniel Dell made eight catches for 164 yards and a score.

“I feel like everyone has raised their level,” Tune said. “We're starting to click. It's been fun.”

Houston star defensive back and kick returner Marcus Jones was shaken up midway through the third but returned later in the quarter. He wasn’t on the field for part of the fourth period.

There was no update postgame on Jones' injury.

“It's one of the best feelings ever,” Battie said of his score 13 seconds into the game.

“I don't want to sit here and act like I'm mad because we just won our eighth game in a row and won a conference game on the road," Holgorsen said. “There's a lot of things that we're going to have to clean up. At the end of the day, the difference was Clayton Tune."

South Florida quarterback Timmy McClain went 22 of 46 for 289 yards and two touchdowns. He was intercepted twice.

The Bulls gained 232 first-half yards against Houston’s fourth-ranked defense that had allowed 286.9 yards and 19 points per game coming in. South Florida finished with 399 total yards, but Houston piled up 646.

“We didn't give up, we just ran out of gas,” USF coach Jeff Scott said of his defense,

Jake Herslow made a nifty leaping catch in the back of the end zone on an 18-yard pass from Tune midway through the first quarter, but the Cougars trailed 14-9 after the opening 15 minutes.

Houston entered the game outscoring opponents 107-24 in the first period.

Jones, who returned a kickoff 100 yards for a clinching TD with 17 seconds remaining in Houston’s 44-37 win over SMU last week that lifted the Cougars into the Top 25 for the first time since October 2018, was sent airborne on a tackle by Timarcus Simpson after a 19-yard runback on the kickoff following Battie’s first TD return.

Jones had a 100-yard second-quarter interception return neglected by a holding call, but the Cougars scored on the ensuing possession when Tune hooked up with Dell on a 55-yard scoring strike.

Houston: Holgorsen was anxious to see how his team would respond after reaching the Top 25 and saw it was able to overcome rare defensive struggles.

South Florida: Was able to keep sack-happy Houston, which was averaging 4.25 sacks per game, without one due to effective blocking and McClain's elusive moves.

“That kid is going to be special,” Holgorsen said of the freshman USF quarterback.

Houston will likely stay around 20th in the AP poll following the win over a USF team that is beginning to show a tendency to stay in games.

South Florida graduate Jessica Duemig was the public-address announcer. The school said Duemig is just the second woman known to have handled the duties at an FBS game. Pac-12 Network’s Kate Scott did it at the Pac-12 championship game.

Houston: Plays at Temple on Saturday.