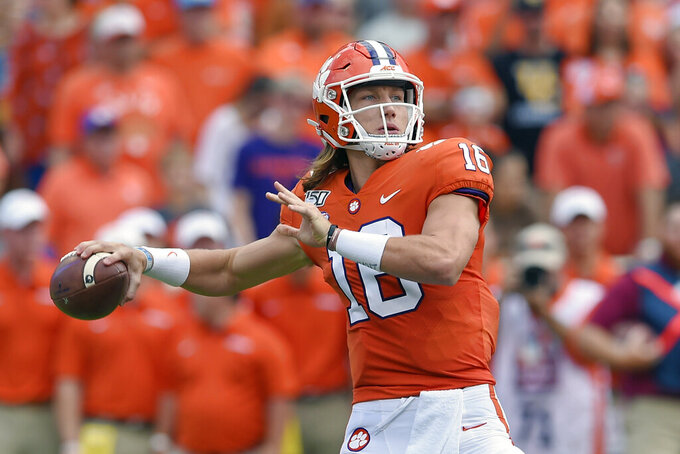 This college football season is already so odd that it’s unclear whether this is Week 1 or Week 2.

Was Labor Day weekend Week 0, with a handful of games and no Power Five conferences involved?

No matter what you call it, this pandemic-altered season is certainly ramping up — but not without hiccups.

Several games scheduled to be played this weekend, including No. 15 Oklahoma State against Tulsa, have been postponed. There are still 20 games on the docket, including Miami's 31-14 victory Thursday night over UAB.

Some of them are kind of interesting.

Louisiana-Lafayette at No. 23 Iowa State.

The Ragin' Cajuns are the third team the Cyclones have had scheduled to play on this date after having games against rival Iowa and then Ball State canceled.

Getting a game is good. Iowa State didn't end up with a gimme, though. Louisiana-Lafayette is coming off an 11-win season and a second straight Sun Belt Conference title game appearance.

Much of a really good team is back, including two really good running backs in Elijah Mitchell and Trey Ragas.

Iowa State from the Big 12 has quarterback Brock Purdy entering his third season as a starter, All-America tight end Charlie Kolar and an inexperienced defense.

No. 1 Clemson and Trevor Lawrence begin their season at Wake Forest, a solid opportunity for the star quarterback and preseason Heisman front-runner to launch a campaign.

Lawrence had a couple of rough patches as a sophomore, but only by his own high standards would last season be looked at as anything other than a success. He passed for 3,665 yards and 36 touchdowns with eight interceptions.

Wake has seen mostly the best of Lawrence during his two seasons. The junior is 41 for 52 with six touchdown passes and no picks against the Demon Deacons. Clemson has won those two games by a combined 115-6.

1 — No. 10 Notre Dame has been playing football since 1887. For the first time, the Fighting Irish will play a conference game Saturday. Notre Dame hosts Duke to start its first — maybe last — season as a member of the Atlantic Coast Conference.

3 — Florida State's losing streak in season-opening games. The Seminoles last lost that many openers in a row from 1973-76. Florida State begins its season at home Saturday against Georgia Tech.

11 — Pass attempts last season for Oklahoma's Spencer Rattler. The Sooners' new starter is the first non-transfer to begin the season as QB1 since before Trevor Knight in 2014. Rattler is following three straight Heisman finalists at OU: Baker Mayfield, Kyler Murray and Jalen Hurts.

11.5 — Louisville QB Micale Cunningham's average yards per pass last season. With only 179 pass attempts, he didn't have enough to qualify for the national lead — but that average topped Joe Burrow's FBS-best 11.3. The Cardinals open their season against Western Kentucky, the opponent Cunningham faced in his first start last season.

A couple of relatively new members of FBS. App State has become a Group of Five power in the Sun Belt, going 24-3 the past two seasons.

Charlotte, from Conference USA, broke through with a bowl appearance last season and appears to be on the rise under coach Will Healy.

Probably won't be much hot-seat action with just about every school taking financial hits this season, playing with few or no fans in the stands. Most coaches will get a mulligan.

One coach who could really use a win to start this season, though, is Les Miles of Kansas. The former LSU coach was greeted with quite a bit of fanfare in Lawrence last year, but the Jayhawks weren't much better than before he arrived.

Kansas opens at home against Coastal Carolina, which beat the Jayhawks last season. It is Kansas' only non-conference game of the season and the Jayhawks' best chance to win one.