Whittingham among AP's Pac-12 award winners for 1st half 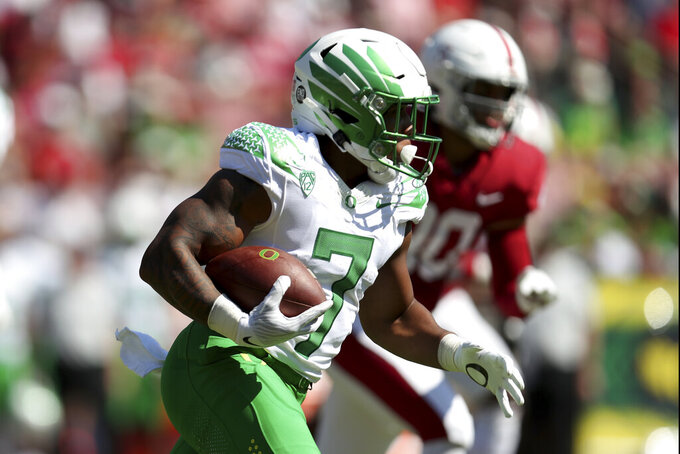 The Utah Utes raised their voices — and their coach — after an emotional come-from-behind win over a ranked Arizona State team.

They cheered in the locker room. They sang. They hoisted up coach Kyle Whittingham.

The Utes (4-2, 3-0 Pac-12) reveled in the occasion after their third win in a row to remain the only Pac-12 team undefeated in league play. A heartwarming moment for Utah in a heartbreaking season following the death of defensive back Aaron Lowe, who was killed in a shooting at a house party in September.

Whittingham has helped keep the team bonded together, which is a reason why he was selected as the Pac-12 coach of the first half in balloting by The Associated Press writers covering the conference.

That celebration in the locker room with the Utes players following the 35-21 win over the Sun Devils — they were down 21-7 at halftime — was pure exuberance.

Whittingham also dedicated the game ball to Lowe and running back Ty Jordan, who died in an accidental shooting on Christmas 2020. Lowe switched to Jordan’s number (22) this season in honor of his friend and fellow Texas native. Lowe also was the inaugural recipient of the Ty Jordan Memorial Scholarship.

There’s now an Aaron Lowe Memorial Scholarship — and the first contributor was Whittingham.

“We won’t get over it, but we will get through it,” Whittingham said recently on Utah’s website. “Aaron is gone, but he will never be forgotten.”

Earlier this season, the Utes had their starting quarterback, Charlie Brewer, leave after losing his starting job to Cameron Rising. The team is 3-0 under Rising's leadership.

“We have a lot of guys who love football and it shows," Whittingham said. "That’s what’s been exuded during the course of the season.”

Here are some of the Pac-12′s most notable — and not-so-notable — performers of the season so far:

Southern California junior wide receiver Drake London, who played basketball as a freshman at USC before focusing on football. The athletic receiver is second in the nation in catches (64) and fourth in yards receiving (832). Also receiving a vote: Oregon State running back B.J. Baylor, who leads the Pac-12 with 112.8 yards rushing per game.

Utah junior linebacker Devin Lloyd. Whittingham had high praise for Lloyd, who picked up his second Pac-12 defensive player of the week honor after a three-sack, eight-tackle performance against Arizona State. “He’s a guy that when there’s a play there to be made, he almost always makes it,” Whittingham said. Lloyd is tied for sixth in the nation with 10.2 tackles per game. Also receiving a vote: Oregon safety Verone McKinley III, who has four interceptions for the 10th-ranked Ducks.

Oregon State. Coach Jonathan Smith has the Beavers making a run at their first bowl appearance since 2013. Among Oregon State's biggest moments this season was its first road win in Los Angeles over the Trojans since 1960. The Beavers (4-2, 2-1) were picked to finish fifth in the Pac-12 North Division in the preseason media poll. Another big test looms this weekend against Utah.

Southern California. The Trojans (3-3, 2-3) fired coach Clay Helton two games into his seventh season in charge. They've alternated wins and losses all season, which may bode well at No. 13 Notre Dame this weekend after a loss to Utah on Oct. 9. The Trojans had a bye last week. Also receiving votes: Washington, which started ranked No. 20 but dropped out after a loss to Montana. The Huskies (2-4, 1-2) were picked to finish second in the Pac-12 North.

California coach Justin Wilcox. His teams are 2-8 since a win in the 2019 Redbox Bowl. The league has already seen the firing of Helton, with Donte Williams taking over on an interim basis. Washington State coach Nick Rolovich and four assistants were let go Monday for refusing a state mandate that all employees get vaccinated against COVID-19. Also receiving a vote: Herm Edwards, Arizona State.

Oregon junior running back CJ Verdell. He was injured against Stanford on Oct. 2 and ruled out for the season. Verdell is fifth on Oregon’s all-time rushing yards list. Also receiving a vote: Colorado QB J.T. Shrout, a transfer from Tennessee who suffered a season-ending knee injury in camp. The Buffaloes (2-4, 1-2) have struggled on offense.