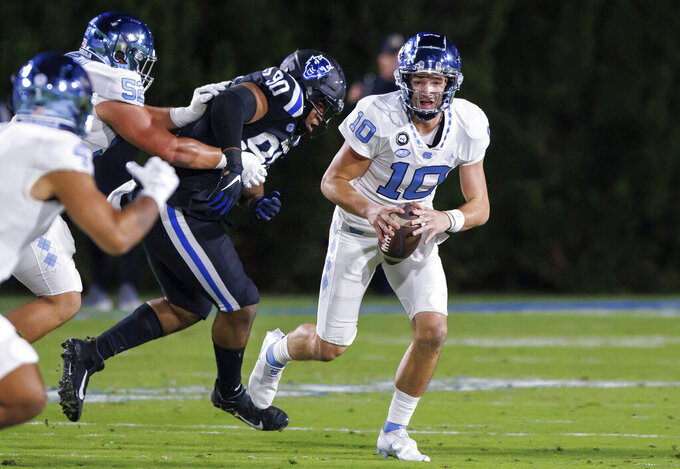 North Carolina's Drake Maye (10) scrambles out of the pocket during the first half of an NCAA college football game against Duke in Durham, N.C., Saturday, Oct. 15, 2022. (AP Photo/Ben McKeown)

Being listed at one skill position hasn’t stopped many Atlantic Coast Conference players from contributing elsewhere on offense.

In fact, several are thriving because of their versatility.

Pittsburgh running back Israel Abanikanda leads the nation in all-purpose yardage thanks to a string of eye-popping performances. North Carolina freshman quarterback Drake Maye tops the FBS in total offense by passing and running the ball quite well (380.1 total yards per game).

They are accompanied by a number of ACC athletes in both categories nationally, helping fuel strong starts for many schools along with establishing a presence in the rankings. Not to mention, a nightmare for opposing defenses to account for.

“Any time you have that extra hat to run the ball, it creates tougher situations for the defense and they’ve got to defend another guy in the run game,” Clemson offensive coordinator Brandon Streeter said of junior quarterback DJ Uiagalelei, whose 337 yards rushing has helped put No. 5 Clemson (7-0, 5-0) back atop the Atlantic Division after finishing third last fall.

“There’s a lot of different ways to manipulate the defense when you have a guy who’s willing to run and healthy enough to run, and that’s what DJ’s been able to do this year," he said.

Abanikanda tops the nation with 186.2 all-purpose yards per contest thanks to an ACC-best 830 yards rushing and 228 more on kickoff returns. Syracuse's Sean Tucker, Clemson's Will Shipley and Miami's Key'Shawn Smith are among the top 40.

The Pitt junior is coming off a school-record 320-yard effort on the ground against Virginia Tech and leads the league with 12 touchdowns. Abanikanda has always been fast but became more hard-nosed and willing to run between the tackles.

His emergence has helped the Panthers (4-2, 1-1 ACC) overcome the departure of quarterback Kenny Pickett, and he could become Pittsburgh’s first 1,000-yard rusher since 2018 this weekend at Louisville.

On the other sideline will be mobile Cardinals quarterback Malik Cunningham, who missed the Virginia game with concussion-like symptoms. The fifth-year senior averages 285 yards per game (39th) and recently became the sixth FBS player to surpass 9,000 yards passing and 3,000 rushing.

“When he’s in balance and has great fundamentals, and he’s an outstanding passer as well, he puts a lot of pressure on defenses,” Satterfield said.

While the Orange continue to thrive offensively with the impressive combination of record-setting back Sean Tucker and quarterback Garrett Shrader, they’re contributing in different ways this fall with new coordinator Robert Anae and quarterbacks coach Jason Beck. Shrader ranks 36th offensively with nearly 288 yards per game but rushing less than last fall when his 781 yards supplemented Tucker’s record 1,496.

“I think he’s more confident, he’s more comfortable with what’s going on,” coach Dino Babers said of Shrader. “He’s done a fabulous job of knowing what guys can and can’t do, and giving them an opportunity to do that on the football field.”

Schrader’s 1,434 yards passing are just 11 off last year’s total, but 300 yards on the ground demonstrate he’s still a threat with his feet. Meanwhile, Tucker’s 644 yards rushing rank second to Abanikanda and he’s 15th in all-purpose yards at 139.33 with nearly 200 yards receiving.

Syracuse will need both when it visits Clemson in an ACC showdown on Saturday, hoping to maintain its remarkable roll.

On the other hand, Maye is using the Tar Heels’ bye week to recharge for a challenging second half that include a game next weekend with Pitt before facing No. 13 Wake Forest and No. 23 North Carolina State over the final three games.

The younger brother of former Tar Heels basketball star Luke Maye has passed for 2,283 of his 2,661 total yards and 24 touchdowns. Coach Mack Brown has praised the 19-year-old’s maturity in following Sam Howell, but he and offensive coordinator Phil Longo are also stressing the benefits of sliding and running out of bounds as self-preservation.

Ball protection is another area of concern but Brown couldn’t be happier about what Maye has done — in multiple areas.

“When you’ve got a guy like Drake, man, it gives you a chance every week,” Brown said. “So, help him. Help him, defense. Help him, offense. Make some plays. Protect better. Do everything you need to do. But I’m so proud of him.”