Alabama turning to Brooks, others to fill Metchie's void 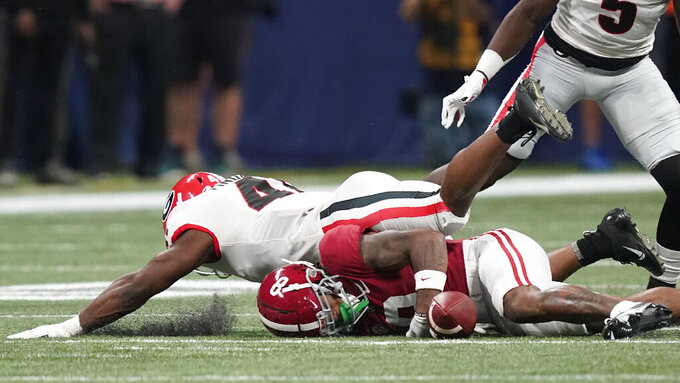 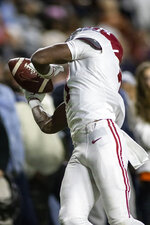 Ja’Corey Brooks has already had his DeVonta Smith moment as a freshman making the biggest catch of the season for Alabama.

Or the biggest one so far.

Now, Brooks and other young receivers for the top-ranked Crimson Tide will have to step up again in Friday’s Cotton Bowl semifinal game against No. 4 Cincinnati and the nation’s No. 2 pass defense in Arlington, Texas.

John Metchie III, one of the Tide’s two 1,000-yard receivers, is out with a left knee injury sustained in the Southeastern Conference championship game against No. 3 Georgia. Alabama still has one of the nation’s top deep threats in All-American Jameson Williams, but it remains to be seen who will emerge as Heisman Trophy-winning quarterback Bryce Young’s No. 2 target.

“When you lose a guy like Metch, it’s not easy,” Alabama offensive coordinator Bill O'Brien said. "He’s a 100-catch guy. He can do so many different things for us, and he’s just a great guy. So his presence in the room is missed and all those things.

“But when those things happen in football, it does give opportunities to other guys, you know, guys like Ja’Corey Brooks, JoJo Earle.”

Now topping the depth chart at his position is Brooks, a five-star recruit, who caught the tying 28-yard touchdown pass from Young with 24 seconds left against Auburn en route to a four-overtime win.

It wasn't on quite the same stage as Smith's 41-yard game-winning catch in overtime to beat Georgia in the national championship game on Jan. 8, 2018.

But it was one of Brooks' five catches so far and his lone touchdown and kept the team's playoff hopes intact. Smith, who won the Heisman in 2020, had only eight receptions — and three TDs — as a freshman and his only catch of the final three games was the big one from fellow rookie Tua Tagovailoa.

Brooks isn't the only young candidate to fill that role. Alabama signed four of the Top 10 receivers in the 2021 recruiting class, led by Brooks, rated the No. 2 receiver in the 247Sports composite rankings.

Earle, who also returned punts, hasn't played since sustaining a lower body injury Nov. 13 against New Mexico State. But he did warm up before the SEC championship game and could be available. Fellow freshmen Agiye Hall and Christian Leary have seen some playing time.

“They’ve all improved throughout the season,” said Slade Bolden, the team's third starting receiver. "They’ve seen first-hand that all it takes is one guy to go down and the next guy needs to step up.

“Anything can happen, and everyone has to be ready. I feel like that’s kind of got these guys going a little more.”

Williams, the deep threat, and Metchie, the ever-reliable possession guy, had given Alabama a formidable 1-2 punch all season. Williams has 68 catches for 1,445 yards and 15 touchdowns. Metchie caught 96 passes for 1,142 yards and eight TDs.

They join Smith and Jerry Jeudy in 2019 — both eventual first-round NFL draft picks — as the only Alabama receiving tandem with 1,000-yard seasons in the same year.

Nobody else has more than Bolden’s 32 catches and 333 yards this season.

The Tide struggled for part of the Auburn game after Williams was ejected for targeting on special teams. Metchie was hurt after closing in on 100 yards in the first half of the SEC championship game.

Metchie made the trip to Texas with the team and remains a presence.

“He’s with us every day,” Williams said. "He’s at practice on the sideline. He’s on the buses with us. He kicks it with us in the hotel. So I would say he’s dealing with it very well.

“I haven’t seen any bad signs. He always smiles all the time. So I would say he’s dealing with it really great actually.”

It remains to be seen if Alabama deals as well with his absence on the field.