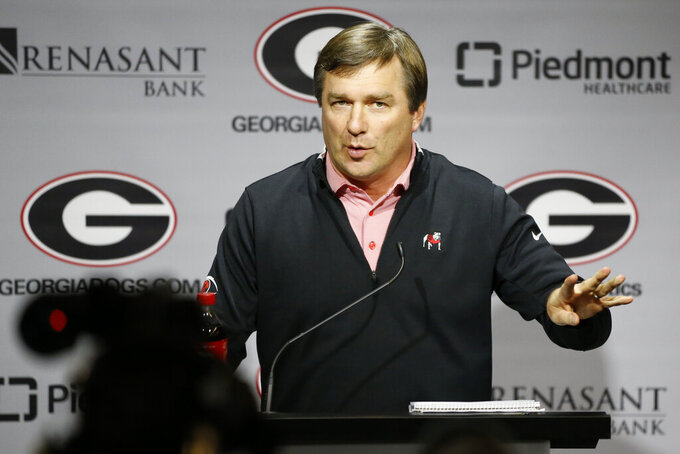 Nine of the nation’s top 100 prospects according to composite rankings of recruiting sites compiled by 247Sports are listed as uncommitted, but the majority of them plan to announce their college decisions over the next two weeks.

Cornerbacks Kelee Ringo (ranked No. 8 overall) and Dontae Manning (No. 76), tight end/athlete Darnell Washington (No. 10), wide receivers Gary Bryant Jr. (No. 57) and Xzavier Henderson (No. 59) and running backs Zachary Evans (No. 14) and Daniyel Ngata (No. 80) are scheduled to announce at their respective high school all-star games. The Under Armour All-America Game takes place Jan. 2 in Orlando, Florida, and the U.S. Army All-American Bowl is Jan. 4 at San Antonio, Texas.

“It’s just an opportunity to do it on national television and just sort of make a moment out of it,” said Barton Simmons, the director of scouting for 247Sports.

While these all-star games have long served as showcases for elite recruits to announce their college decisions, the arrival of the early signing period two years ago has created a new wrinkle because it leaves open the possibility that a player could sign with a school and try to keep it quiet until he announces his decision on television.

Simmons said the all-star game announcements could provide good news for Georgia and Oregon since both schools are contending for a number of top players who haven’t announced decisions, including Ringo and Manning. Georgia also is a contender for Washington and Evans.

Clemson closes the early signing period ranked atop the team recruiting rankings after landing seven of the nation’s top 29 prospects, but Alabama is close behind. Clemson and Alabama are followed in order by Ohio State, Georgia and LSU.

“Alabama could absolutely top Clemson depending on whether they can figure out a surprise here in January, but I think Georgia is probably the team that is most dangerous for Clemson,” Simmons said regarding the race for No. 1.

Some stories to follow as the early signing period ends:

WHO HAS WORK TO DO

Southern California is a team looking to boost its recruiting class over the next couple of months. USC never has ranked outside the top 20 in the history of the 247Sports Composite, which has had team rankings dating back to 2008. After the early signing period ended, the Trojans were left with a class ranked last in the Pac-12 and outside the top 75 nationally.

USC only has signed 11 players thus far but could boost its class in February. The Trojans are considered prime contenders for Bryant.

“There’s still targets out there for us to acquire that we’re in the hunt for,” USC coach Clay Helton said.

First-year coaches find recruiting harder than ever now because the early signing period often arrives only a couple of weeks after they’re been hired. Those new coaches often have the most work to do in stocking up their classes in January and February.

As of Friday afternoon, the only program with a coaching change listed among the top 20 teams in the recruiting rankings was Washington, which announced that Chris Petersen would be stepping down after the Las Vegas Bowl and that defensive coordinator Jimmy Lake would be taking over.

Washington was ranked 14th, while Florida State and Mike Norvell were ranked 21st. Washington had an advantage over other teams making coaching changes because Lake already was part of the Huskies’ staff.

“The best anyone has done among the new coaches is just to hold things together,” Simmons said. “That’s sort of what Mike Norvell has done. (Arkansas’) Sam Pittman has climbed in the rankings a lot but only because there was nowhere to go but up. (Mississippi’s) Lane Kiffin probably lost more than he’s gained.

“Given the nature of the early signing period, we haven’t seen any of the new coaches really blow it out of the water.”

SEC schools make up six of the top eight teams in the 247Sports Composite recruiting rankings as the early signing period closes. No. 2 Alabama, No. 4 Georgia and No. 5 LSU are followed by No. 6 Texas A&M, No. 7 Auburn and No. 8 Florida.

By contrast, the Pac-12’s highest-ranked team is Washington at 14.

While Georgia should finish near the top of the team recruiting rankings, Georgia Tech also has opened some eyes by producing a top-25 class after going 3-9 this season in Geoff Collins’ debut year as coach.

Georgia Tech has never posted a top-40 recruiting class in the history of the 247Sports Composite, which dates to 2008.