Analysis: Alabama confident it can beat Georgia in rematch 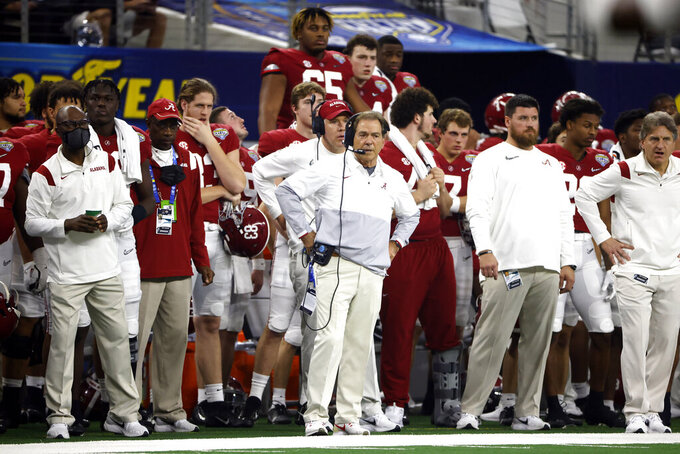 If it's not easy beating a team a second time, it's likely even harder to do it using the same formula.

But No. 1 Alabama does have enough ways it can attack opposing defenses, even a dominant one like third-ranked Georgia has, to win the College Football Playoff championship game Monday night in Indianapolis.

The Crimson Tide features two of the top players in college football: Heisman Trophy-winning quarterback Bryce Young and linebacker Will Anderson. And Alabama's defense has proven to be quite formidable even if its been overshadowed at times.

The Alabama isn't shying away from the challenge beating a team twice in just over a month.

“I don’t think it’s tough having to play somebody twice,” Tide defensive coordinator Pete Golding said. “I mean, I know everybody talks about that and all that. But if you look at the NFL, you’re playing everybody in your division twice.”

Georgia may have extra motivation coming out of the locker room. But Alabama has the confidence from having done it before.

The Tide dominated the Bulldogs 41-24 in the Southeastern Conference championship game with Young passing for 421 yards and a hobbled Brian Robinson Jr. running for 55.

Then the Tide clamped down on Cincinnati 27-6 in the Cotton Bowl. In that CFP semifinal, Young yielded the starring role. The sophomore passed for 181 yards while Robinson's 204 rushing yards paved the way for the offense.

An injury to wide receiver John Metchie III after nearly reaching 100 yards in the first half changed the offensive dynamics.

But freshman Ja'Corey Brooks and other receivers have shown flashes that could help them complement All-America receiver Jameson Williams in the rematch with Georgia along with veteran Slade Bolden. Tight ends Jahleel Billingsley and Cameron Latu are capable of making plays, too.

The Bulldogs, like most teams, had scant success containing Williams in the SEC title game. O'Brien and his offensive coaches have found ways to keep getting him the ball, often downfield.

Alabama's offensive line will play a significant role in the outcome. The unit has been strong since giving up seven sacks against Auburn. And it will have to be against Georgia's defensive front led by Jordan Davis.

Defensively, Alabama will be looking to slow down Bulldogs tight end Brock Bowers, who had 10 catches in Atlanta, and contain Georgia's running game.

The Crimson Tide are confident they'll be able to get in done. Nick Saban has had tremendous success making adjustments in a second meeting against a team, especially defensively.

In the 2011 season rematch with LSU, Alabama won after losing the regular season matchup 9-6 in overtime.

“The benefit could be we’ve seen these guys before,” Williams said. “We have to prepare for the little wrinkles and the corrections they made and we can just play great football off of them.”

Of course, the Bulldogs will be doing that, too.

But besides Saban's experience, Alabama has another potential advantage. The Bulldogs held the No. 1 ranking most of the season and just weren't tested all that much before the SEC title game.

Alabama has had several close calls and had been able to comeback from deficits, including a four-overtime win over Auburn.

The experience in tight contests another edge that could title the game in the Crimson Tide's favor.