Boise State looks for rebound after surprising down season 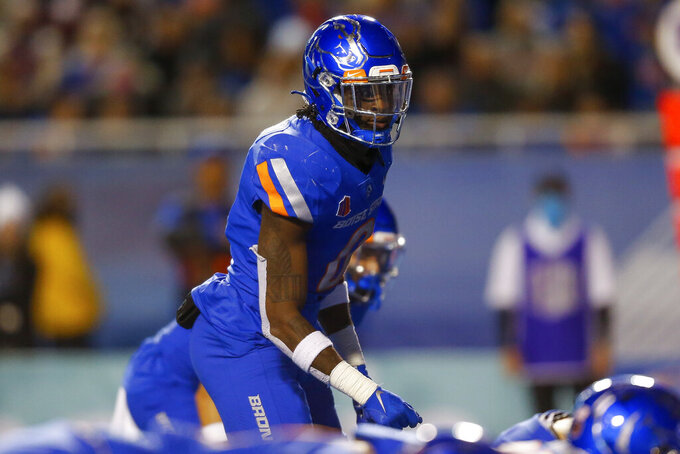 FILE - Boise State safety JL Skinner (0) looks over the Air Force offense before the snap during the second half of an NCAA college football game Saturday, Oct. 16, 2021, in Boise, Idaho. Boise State is set to kick off its season on Sept. 3, 2022, against Oregon State. (AP Photo/Steve Conner, File)

Boise State finished last season with seven wins for its lowest total since 1998.

The Broncos responded with a renewed focus on the roots of the program's success.

“This has been a work in progress since January, re-establishing this foundation to the things that we know that have been true to this program for a long time,” coach Andy Avalos said. “And it’s fun to see the players lead those things. ... The things that we were trying to get refocused on, to be a staple, a foundation within this program that helped build all this, the players are leading it now.”

For the first time since 2016, Boise State did not end last season in the Mountain West Conference championship game. The Broncos finished third in the Mountain Division — their lowest finish since joining the conference — and had their bowl game canceled following COVID-19 issues within the program.

It would have been a challenging season for any coach, let alone someone like Avalos in his first time as a head coach.

The Broncos believe they have the pieces to move on from last year’s down season and return to being one of prominent teams in the Mountain West. They return Hank Bachmeier at quarterback for his fourth season, but must be better at protecting him to make the offense work. George Holani is back at running back, but the Broncos have to replace Khalil Shakir after the receiver had 43 more catches than anyone else on last year’s roster.

“For us to have moved the needle so far ahead of where we were last year to where we’re at now, and all phases, it’s been tremendous. I think our guys have confidence because of that,” Avalos said.

It feels as if Bachmeier has been around the Boise State program forever, even if this will just be his fourth season. He was one of the most highly regarded recruits in school history so his entire career has been viewed through that prism.

So the fact that Boise State’s offense struggled last season fell on Bachmeier, even if he stayed healthy and his numbers were pretty good. Bachmeier threw for more than 3,000 yards and 20 touchdowns with just eight interceptions. But the Broncos averaged 29.2 points per game, the first time they were under 30 points per game since 1998.

One benefit for Bachmeier and the entire Boise State offense will be a second season with offensive coordinator Tim Plough.

“Being in it, learning the scheme for the second year, it’s just been really fun to kind of take it to that next step in regards to your operation and kind of the things that you can do with the freedom that I have,” Bachmeier said.

Holani could provide a big boost if he can return to his form of 2019 when he rushed for 1,014 yards and seven touchdowns as a freshman. Holani averaged 4.8 yards per carry last season, but was limited to nine games. Holani was really good late in the season with three straight games of 100 yards against Fresno State, Wyoming and New Mexico, all Boise State wins.

The Broncos secondary last season was exceptional, allowing fewer touchdown passes (12) than interceptions (13). Skinner was part of that shutdown secondary with two interceptions, to go along with being Boise State’s leading tackler.

Skinner is one of several returning defensive backs who had at least two interceptions last season for the Broncos. Tyric LeBeauf led the way with three picks and is likely to be a starter at cornerback along with Caleb Biggers.

Boise State will get an immediate test opening the season at Oregon State, a trendy pick to make noise in the Pac-12. The Broncos play three of their first four on the road, but it’s consecutive home games against San Diego State and Fresno State that are likely to determine the direction of their season. Boise State’s big nonconference showdown comes late, hosting BYU on Nov. 5.