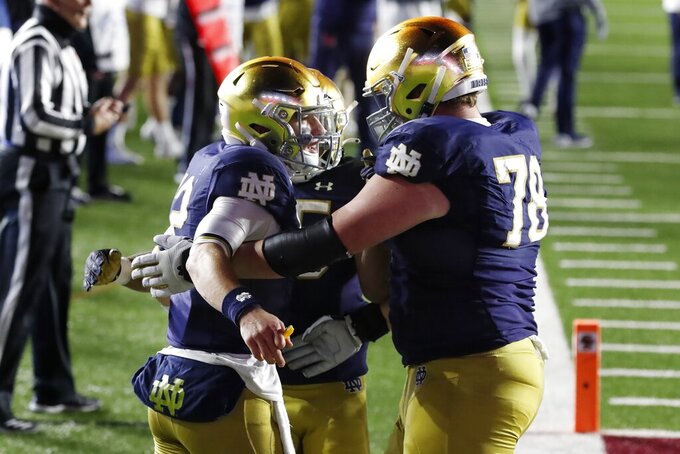 SOUTH BEND, Ind. (AP) — Notre Dame tends to have its doubters every season. Eight victories in, the Fighting Irish have made many of them believers behind the play of Ian Book.

“When your quarterback is playing at a high level, it gives you a great chance to be a championship-caliber football team,” coach Brian Kelly said after the fifth-year graduate’s quick feet and accurate right arm propelled the No. 2 Fighting Irish (8-0, 7-0 Atlantic Coast Conference) to a 45-31 victory at Boston College last Saturday.

“You can see him just continue to grow each and every week,” Kelly said.

Book is now 28-3 as a starter for Notre Dame, tied with Tony Rice of the 1988 national champions and one victory away from joining Ron Powlus, Brady Quinn and Tom Clements as the winningest quarterbacks ever for the storied program.

His running and throwing abilities remind many of Clements, now the passing game mentor for Kyler Murray of the Arizona Cardinals but once the quarterback for the 1973 national champions.

Book, who has 195 consecutive pass attempts since his only interception of the season in the season opener, completed 20 of 27 passes for 283 yards and three touchdowns and added a six-yard scoring run and 85 rushing yards against the Eagles. A week earlier, Book overcame a third-quarter fumble with a late game-tying touchdown drive that sent Notre Dame into overtime for an egentual win over then-No. 1 Clemson. Book had 310 yards passing and another 67 rushing that night.

“We’re starting to jell right now,” Book said after the BC game. “I just feel like the chemistry between the receivers and me is really getting there.”

That chemistry has taken time.

After losing top 2019 receivers Chase Claypool and Cole Kmet to the NFL, Book got little time to work with his new targets because of the pandemic and various injuries. But his knowledge of first-year offensive coordinator Tommy Rees’ playbook and ability to prolong plays with his feet are paying dividends.

In eight games, Book has completed 62% of his passes for 1,818 yards and 11 touchdowns with the lone interception and he’s second on the team with 364 rushing yards and six more TDs. Kelly races about his QB's "great escapability, a great sense of when to take off.”

“The play is never dead until the whistle blows,” Book said. “They (his receivers) are doing a good job coming back to me, making plays and shaking off the DB. We were able to make some huge plays after I extended it outside of the pocket.”

The knock on Book for years has been size (6-foot, little more than 200 pounds), but the California native has answered all questions so far this year.

“He’s a humble worker,” defensive end and fellow captain Adetokunbo Ogundeji said. “He understands what he needs to work on, and he just perfects his craft.”

“I see the amount of time he’s dedicated and sacrificed to help this football team win and for us to take the next step,” offensive tackle Liam Eichenberg added. “I think Ian is the best quarterback in the country and he’s the best leader on our team.”

Book has a new responsibility this bye week before resuming the season Nov. 27 in what could be a shootout with North Carolina (6-2, 6-2 ACC). He will have to get familiar with new center Zeke Correll with Jarrett Patterson expected to miss the rest of the season after foot surgery.

“I don’t expect a big falloff,” Book said. “These guys are as excited about winning a national championship just like a fifth-year senior would be.”