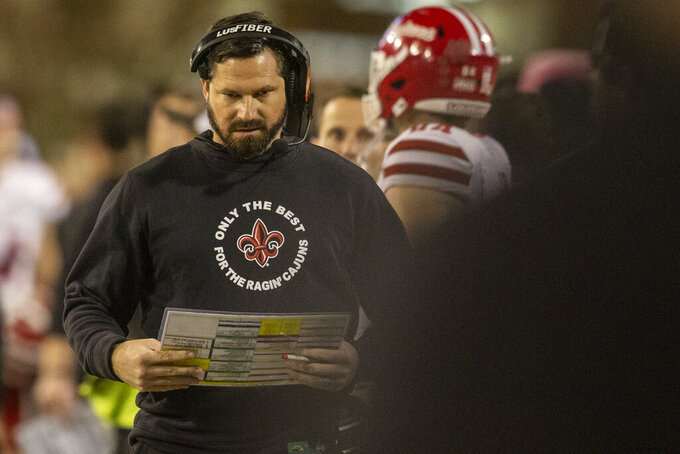 TALLAHASSEE, Fla. (AP) — Coach Mike Norvell has been building a culture of embracing hard work at Florida State, and the 19th-ranked Seminoles are starting to deliver the progress he envisioned.

They've gone from three wins in 2020, his first season, to five in 2021 and now seven and counting this year. After a three-game midseason skid, the Seminoles (7-3) have won three straight, including a 42-point rout of rival Miami and a 38-3 beatdown of Syracuse last Saturday night. They finished Atlantic Coast Conference play at 5-3, the most league wins for the program since 2016.

“We talked about wanting to make a statement in how we finished,” Norvell said. “We secured at least a second-place finish in the Atlantic Division, which is not where we want to be. But it definitely shows growth. It shows steps of progress, and even with that stretch there in the middle of the season, I thought our guys responded at a very high level with our last three games in the ACC.”

There was cautious optimism for Florida State in Norvell’s third year. The team was picked to finish fifth in the Atlantic Division in the preseason. The Seminoles lost three straight October games to ranked ACC teams — Wake Forest, North Carolina State and Clemson — but finished with a flourish, knocking off Georgia Tech, Miami and Syracuse by a combined 124-22.

“We’ve been dominant the last three games, but we can be better,” Norvell said. “That is the push. That’s one of the things I appreciate with this team is that they understand the process of growth. Every one of these players, not only with what they do here at Florida State, but they all aspire to get to the next level. They all want to do more.”

After two losing seasons, Norvell and the Seminoles are bowl eligible for the first time since 2019. And Norvell’s record at Florida State is up to 15-16, with a chance for him to hit .500 with a win on Saturday. Next up is a home game with Louisiana, which has gone 5-5 in its first season under Michael Desormeaux. The Rajin’ Cajuns have leaned on a stingy defense, which is ranked 30th in the FBS. They’ve allowed just 21.2 points per game, although they have not yet played a Power Five opponent.

“These are fun games to get to go and play in,” Desormeaux said. “You get to go play a really good team on the road in an environment like we’re going to have over there at Florida State. It’s something that our players get excited about.”

Florida State ranks in the top 20 in the FBS in total offense (16th at 477 yards) and total defense (11th at 293 yards). The Seminoles are one of just four teams to rank in the top 20 in both categories, along with a pair of unbeatens, Georgia and Ohio State, and Alabama.

Florida State has not allowed a touchdown on 23 straight drives and gave up just one field goal in each of the past two games. The Seminoles are also forcing more takeaways, and nickel cornerback Greedy Vance has interceptions in back-to-back games.

“We can always be better,” Vance said. “We still have small mistakes in and out throughout the week. We’re still striving to play a perfect game.”

Oregon transfer Trey Benson has had three straight 100-yard rushing games, setting a career high with 163 yards on 18 carries in the win at Syracuse. He is the first player in ACC history to be named the league’s running back of the week three straight times.

Louisiana receiver Michael Jefferson leads the team with 39 receptions for 669 yards and six touchdowns. The 6-foot-4 Jefferson had a touchdown reception in four of his past five games. Norvell said he views Jefferson as an NFL prospect.

Quarterback Jordan Travis had a touchdown rushing and receiving as well as three passing TDs in the win at Syracuse. He is just the second Florida State player to have a rushing, receiving and passing touchdown in a single game and the first since Red Parish in 1949.

Travis completed 21 of 23 passes for a career-best 91.3 completion percentage against the Orange. The redshirt junior has now surpassed 5,000 career passing yards at Florida State.