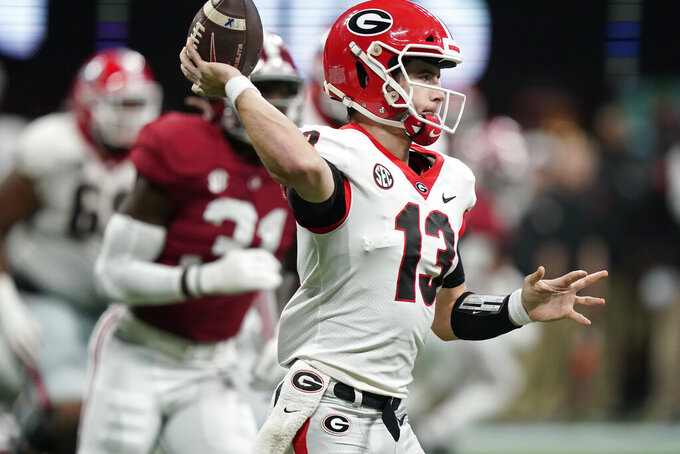 Stetson Bennett has the full support of No. 3 Georgia's coaching staff even as he continues to hear the same doubts that have followed him since he first joined the Bulldogs as a walk-on.

Any remaining questions about Bennett's status as the starting quarterback in Georgia's College Football Playoff semifinal against No. 2 Michigan at the Orange Bowl were put to rest by offensive coordinator and quarterbacks coach Todd Monken on Tuesday.

JT Daniels, who opened the season as Georgia's starter, has rejoined the team after missing time last week. Even so, Bennett's lock on the position appears to be as strong as ever for Friday's game.

Bennett threw for 340 yards and three touchdowns in the 41-24 loss to Alabama in the Southeastern Conference championship game on Dec. 4. He also threw two interceptions, including one returned for a touchdown. Bennett said he was oblivious to criticism of his play following Georgia's first loss.

“I don’t have social media so I don’t wallow in it,” Bennett said Tuesday. “I don’t sit in it. All I think about is beating Michigan and being the best quarterback I can be for my teammates.”

Daniels never entered the game in the loss to Alabama, leading to much second-guessing of coach Kirby Smart.

“Stetson did some really good things in the Alabama game,” Smart said earlier this month. “He made a couple bonehead plays as well ... that he has not done in the past.”

Bennett's edge over Daniels has been his running ability. He has rushed for 251 yards and a touchdown.

“They both have great command of the offense and how the offense is set up,” Michigan defensive coordinator Mike Macdonald said Tuesday of the two Georgia quarterbacks.

“They both do a great job. Stetson is probably a little bit more willing to take off when the play breaks down, but other than that, they’re both really good players.”

Daniels' skills as a passer have not been enough to unseat Bennett, who sometimes is referred to as a game manager.

Before the Alabama game, Bennett was reliable, though sometimes unspectacular, as a passer. He has completed 64% of his passes for 2,325 yards with 24 touchdowns and seven interceptions.

“If you look at the plays that he’s made, he’s made national championship plays,” Monken said. “He has. Just turn on the film and look at some of the throws he makes, some of the decisions he makes, the things he does with his feet.”

The Bulldogs won their final four games in 2020 after Daniels, the Southern Cal transfer, took over the starting job. Daniels also opened this season as the starter, with Bennett no better than No. 3 on the depth chart.

Due to that history, there was a widespread expectation Daniels would eventually reclaim the job after missing four games with a lat injury.

Instead, Smart and Monken stuck with Bennett as the Bulldogs, led by the nation's top defense, finished the regular season 12-0.

“The reason Stetson Bennett plays is we think he gives us the best chance to win,” Monken said.

The Georgia coordinator added Daniels did nothing to hurt his standing.

“It wasn’t anything really JT did, it was more what Stetson did ... in the run game and pass game,” Monken said. “... It just so happened Stetson had the opportunity and took advantage of the opportunity.”

Michigan may be more likely than Georgia to utilize two quarterbacks in the game. The Wolverines have relied on their power running game behind starting quarterback Cade McNamara. Freshman J.J. McCarthy, a dangerous runner, plays behind McNamara.

McNamara threw for 2,470 yards with 15 touchdown passes and four interceptions.

The Orange Bowl matchup is a contrast to the Cotton Bowl CFP semifinal, where the quarterbacks — Alabama's Bryce Young and Cincinnati's Desmond Ridder — are the stars.

Not that Bennett hasn't had his moments. He tied Georgia's record with five TD passes in a lopsided 56-7 win over UAB early in the season. Still, he has been unable to shake off the perception he could lose the job any week.

“Why would I listen to somebody who doesn’t do this for a living and just watches it happen?” Bennett asked.

There has been no indication Smart is ready to make a change at quarterback. There was no media availability for bowl practices in Athens or this week at the Orange Bowl.

Monken said Daniels will be available after missing practice last week and again on Monday.

“JT is a student of the game,” Monken said, adding Daniels has “been in every meeting” through video calls.