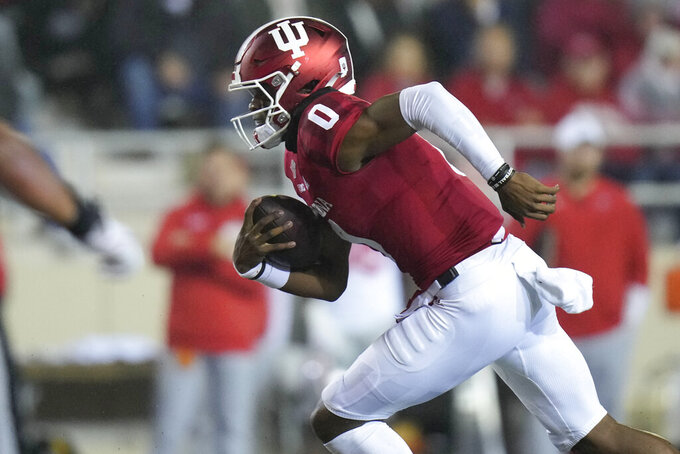 Indiana coach Tom Allen might not have a choice as his top two quarterbacks battle injuries.

“We’ve got to be as efficient as we can and be able to do multiple things with each, if and when they go in," Brohm said. “We’ll prepare to play anybody that we need to to help us win."

The biggest problem for Purdue's quarterbacks has been productivity.

While Jack Plummer won the starting job during the summer and led the Boilermakers to three wins in their first four games, he was pulled in the second half of two games Purdue scored a total of 26 points.

Brohm went with O'Connell the next week, a loss to Minnesota, before unveiling the rotation scheme in a shocking 24-3 victory at then-No. 2 Iowa. Against Wisconsin, the Boilermakers offense produced only one score in a 30-13 loss, spurring yet another round of quarterback questions.

Purdue's other major concern is a running game that has been grounded since Zander Horvath was injured in Week 2. He's expected to practice this week though it's doubtful he'll play at Nebraska, meaning Brohm needs to see more out of O'Connell, Plummer and Austin Burton.

“Right now we’re limited at the running back position — one scholarship running back available," Brohm said. “While running isn’t Aidan’s game, he still has to. He’s been told every game, ‘I need three or four runs from you from designed pass plays that aren’t there, so you have to force yourself to be smart with the football, and while you have thrown the ball in some tight windows, you can’t always do that.'"

At Indiana, the situation is different.

Michael Penix Jr. missed the last two games after separating the AC joint in his throwing shoulder and on Saturday, Jack Tuttle injured his right foot while throwing a touchdown pass to Peyton Hendershot on the opening drive against No. 5 Ohio State.

Tuttle missed the next two series then returned briefly on Indiana's fourth series but left again after two snaps and did not return. Donaven McCulley and walk-on Grant Gremel teamed up to finish the 54-7 loss.

Allen didn't provide many details on Tuttle's injury though he did list Penix and Tuttle as week to week.

“I would say what the MRI showed us was that it wasn’t as bad as it could have been," Allen said, referring to Tuttle. “It definitely was enough to where it creates some unknowns for him to be able to know his status moving forward on a day-to-day basis."

McCulley, a true freshmen from Indianapolis, started this season on the scout team before making his college debut against Michigan State. He completed 1 of 6 passes for 30 yards with a passer rating of 8.3 and ran 11 times for 9 yards.

Gremel redshirted in 2019, didn't appear in any games in 2020 and has made two appearances this season — a blowout win over Idaho and Saturday, when he was 3 of 4 for 9 yards while running once for minus-6 yards.

Both were clearly overmatched against the Buckeyes but Allen now has a full week to prepare both for the Terrapins — even if he's not dropping hints about the game plan.

“It’s really about building things around what he feels comfortable with and can function at a high level and be able to do things he needs to do to help us win a football game,” Allen said of McCulley. “You have to just fully prepare him in that regard, mentally and physically and from a reps perspective. We’ll see how the week plays itself out with Jack."